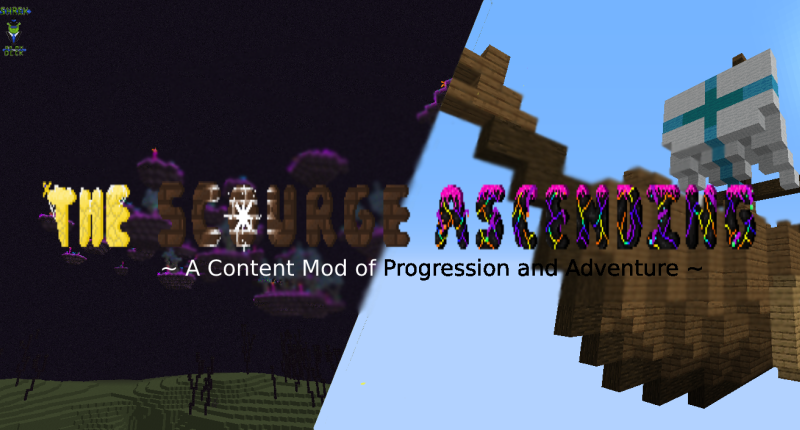 The official photo of The Scourge Ascending mod 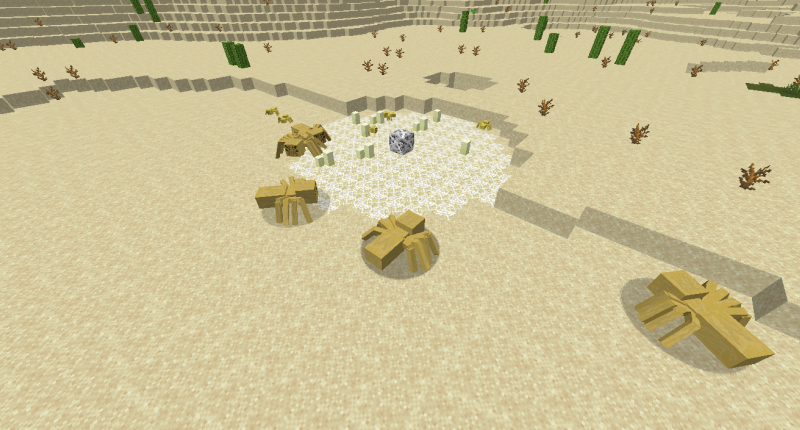 Vanilla biomes have been enhanced with new structures and mobs. 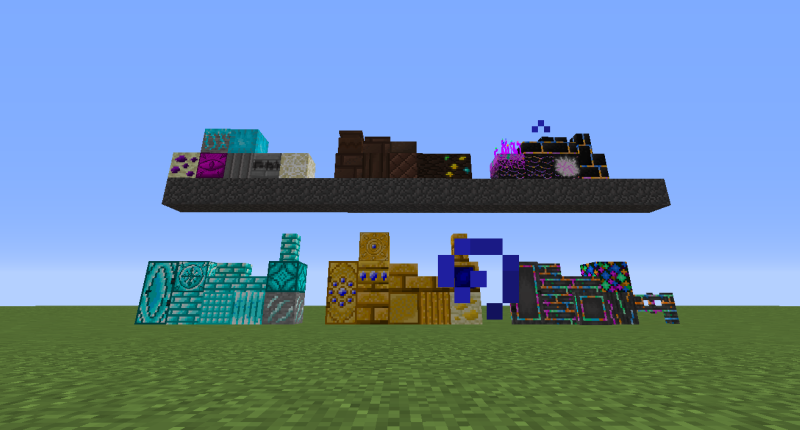 Look at all those blocks! Builders have over 30 new blocks to expirement with. 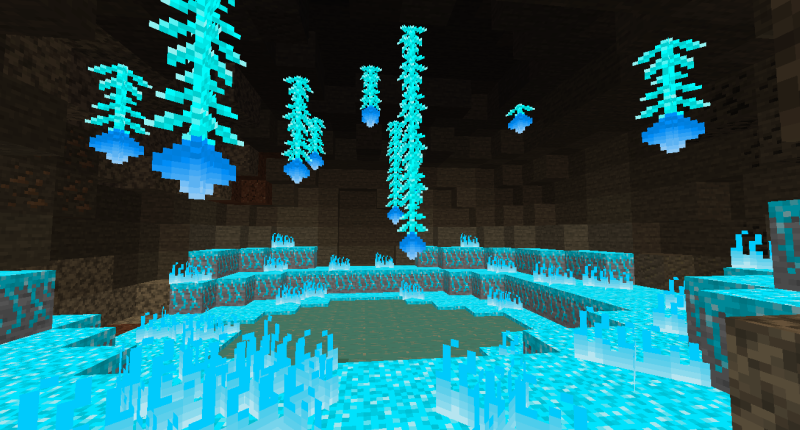 Discover new things to help you on your adventures...

"The Scourge Ascending" is a unique kind of Minecraft content mod. This mod extends the vanilla progression system past the Ender Dragon, adding new content even after the Ender Dragon has been defeated. This mod also takes pride in it's vast array of weapons, tools, and armor, each with a unique ability and concept, With over 40 weapons and counting, there is much to choose from to suit your needs. Like huge swords that deal extreme DPS? No problem, I got you. Enjoy bows that bring the wrath of storms upon your foes? I got the perfect weapon for you. All of the weapons and armor are balanced and  designed to add more variety to combat progression. Not only that, it improves upon many vanilla aspects of the game, improving existing biomes with new structures, ores, and mobs for the avid adventurer to discover. Ever get tired of just the Ender Dragon and Wither? Don't worry, I have your back. This mod adds 2 new bosses with unique designs, AIs, and drops. Plus, defeating the aforementioned vanilla bosses yields new rewards! Neat!

Not quite an adventurer? Do you prefer building? Well, this mod adds a bit of that, too! It caters to builders with over 52 new blocks to spice up your builds! Each block design is unique, and can add some new life to your builds!

This mod also adds some convenience in the form of several items to improve vanilla gameplay. Of course, these are balanced, as to be not too overpowered.

Overall, if you are looking for a new experience across all of your gameplay, than it would be great to give this mod a try!

-Since this mod is made with MCreator, and my lack of experience with coding in general, this mod may be a bit rudimentary, but I plan to continue working on it to make it the best mod it can be.

-Due to complications in the modding engine and problems (like crashing and corruption) that I've experienced, the mobs in this mod do not have animations. Please be considerate, I am trying my best to work this out.

-This mod's progression system is fragile, and may not mesh well with other mods. It's best to play this mod with little to no other content mods installed as to keep the progression, but other quality of life mods will make your experience better. These include the standard vanilla improvement mods as well as recipe browser mods like JEI to navigate the recipes in this mod.

-You may notice this mod is in 1.3. This is because I have been working on it for awhile, but that only means more content from the get-go!

-Yes, I also go by Shrek On My Deck, so don't get confused - we are the same person!

TSA has finally been updated to 1.16.5! With it comes a whole multitude of new features! From changes in the caves to new content in the nether, this world just got a whole lot bigger.

-Added the Desert Caves: These arid caverns beneath the sand dunes may harbor more than meets the eye. The remnants of ancient civilizations are apparent, with the occasional urn, ruins, or giant mega dungeon.

-Added breakable urns and tall urns to the desert caves. These may drop random loot. Tall urns have more loot than short ones.

-Added Egyptian-themed dungeons filled with loot, traps, and adventure. Don't try to break in either, an ancient curse makes it so no blocks can be broken or placed inside these ruins.

-The largest tombs are guarded by a great beast. Perhaps a snake-charmers flute will help... [mini boss].

-Added the Jungle Caverns. Filled with plants. Lots of plants. And moss. Also, watch out for man-eating snakes.

-Added brambles which will poke players who blunder into them. Brambles will also convert zombies into Overgrown Lurkers, a denizen of the deep undergrowth.

-Added Overgrown Lurkers, an undead themed around the jungle biome. Watch out for the projectiles it lobs!

-Added several new flora in the Jungle Caverns, such as moss.

-Added Gaiasteel, a nature-friendly ore that appears in the jungle after the fall of the Hypogean Monarch.

-Added a stronger variant of Bone Meal crafted with Gaiasteel.

-Added new content to The Nether. The souls of the dead have been condemned into umbral souls, and when used correctly, can unleash unspeakable power.

-Added a new boss, the Umbradraken. It will come force after a great sacrifice of souls. Be careful though, it's no pushover.

-Added Ignoble ore, which appears after the demise of the Umbradraken. This can be made into mythical equipment and some snazzy decorations.

-Added several new mobs to guard ignoble ore. Infused with wrathful souls, they will make you fear the nether all over again...

-Overhauled the luminous caverns, adding new flora and fauna to frequent these spots beneath the earth.

-Added some new variations to these caves, including small, medium, and large sizes.

-Added the Glowbug, a shiny pollinator which thrives in these biomes, spreading the native flora. These insects will follow lumenliles, and a capable of renewing lumenlilies and luminescent vines.

-Added glowbug hives to house the glowbugs. They need houses, after all. I head homeless glowbugs are less productive.

-Added lumenlilies, which attract glowbugs and can be put into a delicious stew.

-Added a new food item unique to the Luminous caves.

-Added some new cosmic items. They will be used later...

-Added many new weapons and tools

-Added a new tier of equipment that comes from the Ender Dragon, but only after the Umbradraken fight.

-Added about 25 new blocks, for function and decoration.

-Added an item to summon the Hypogean Monarch.

-Boss fights will change with the in-game difficulty. Drop chances are also adjusted.

-The Hypogean Monarch will summon more minions in higher difficulties, and the minion cap is raised. Health and damage are also scaled to difficulty.

-The Umbradraken will summon more Darkened Souls at a time as difficulty increases, and Darkened souls will heal an additional 20 HP for each difficulty level.

-Numerous texture updates to items. Examples include blocks in the End Novalands biome.

-Many, many bug fixes

-The dual-wielding class has been expanded and reworked.

-Some code reworked for better performance

-Some weapon renaming and change in mechanics.

-Compatibility issues between some items fixed

That's it! Hope you enjoy it! The next update is already in the works. Let's just say the Krighemmel will get a lot better...

textures look sick, and the models too. a really good mod of exploration.