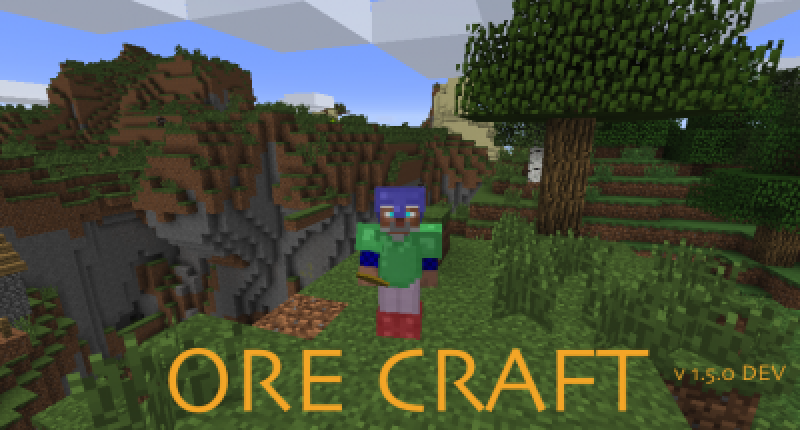 Ore Craft adds many new ores, items, and blocks to Minecraft. Some of these ores are similar to vanilla ores, some are unusual. Please be aware that this mod is very early in development and many new features will be added in the coming days, weeks, and months.

Due to the request of some people and that the modding has gotten rather messy for me, I'm anouncing Ore Craft v2.0.0. This new version will add all new textures and a complete re-make of the current mod. I hope to release a development version in the coming days. Untill then, enjoy the current 1.4.0 version of the mod.

*Generates only on beaches
+Purple Coral
+Red Coral
*Can craft into crystals to make tools and armour. Put coral in crafting table then smelt the 'refined coral' to get a gem.
+Coral Sticks (Required to make tools, used instead of regular sticks)
+Storage Blocks for Purple and Red Corals.
*Crafted like a normal storage block (3x3 of coral crystal)

+Light Lillies, to brighten your oceans at night

+Aquamarine Ore
+Aquamarine Gem
+Aquamarine Sickle, now used to make coral items (put a coral plant in the crafting table with an aquamarine sickle)
+New Storage Blocks for all Gems! (3x3 of that gem in the crafting table)
+Water Block
+Jade Block
+Pearl Block
+Ruby Block
+Silver Block
+Bloodstone Block
+NEW DIMENSION! The Gem Dimension
Frame: Purple Coral Blocks
+Gem Wand, used to ignite the portal
*Portal Texture is not final
NOTE: This dimension will not be in the final version, (there will be multiple) this is just something for you to play around in before the actual dimensions are added.

Water Ore is a naturally occuring ore found between layers 128 and 20. It can be mined with any pickaxe and drops two water crystals.

Sun Ore is a rare are that generates between layers 100 and 256. It can only be mined with a diamond pickaxe and drops two sun dust.

Jade Ore is a fairly common ore generated between layers 0 and 128. Can be mined with any pickaxe and drops itself, requiring smelting.

An uncommon ore, Pearl Ore generated between layers 0 and 130. It drops one pearl and can be mined with an iron pickaxe and better.

Ruby Ore is rare and generates between layers 0 and 128. It requires a diamond pickaxe and drops one ruby. Silver ore is a fairly common ore found between layers 0 and 128. It drops one silver ore, silver ingots are used to make tools.

Copper Ore is currently only used to create Shibuichi. Drops itself once mined and requires smelting to create copper ingots.

A common ore. Drops one bloodstone gem on mining. Can be used to create bloodstone tools and armour.

A very rare ore. Sunstone ore drops one sunstone gem which is a main item for crafting time changers. Tools and armour are unavaillable.

A sun spirit is a mob that can currently only spawn from a spawn egg. It carries a gold sword and gold helmet. It will drop one sun dust on death and will rarely drop a sun stone. They have 13 hearts on health and deliver two hearts of damage + gold sword damage.

Another mob that can only be spawned from a spawn egg, the water chicken has 5 hearts of health and is a passive water mob. On death it will drop one water crystal and will rarely drop a water orb.

Each ore has its own armour set. Sun is the strongest and Jade is the weakest. Ruby is just weaker than diamond, and pearl is similar to chainmail. Water armour is similar to iron armour.

The sun spawner is a unique block which has a 0.25% chance of spawning one sun dust each time it's activated with a redstone signal.

Very similar to the Sun Spawner, the Obsidian Maker creates obsidian dust. When powered with a restone signal, there is a 0.2% chance that one obsidian dust will appear in your inventory. Another common plant. Can be crafted into two purple dye and is an item for crafting the morning time changer. Drinking water is basically a potion. Once drunk, it gives you haste for 30 seconds. Replenishes half a hunger point and gives you fire resistance II. *ALL OTHER ARMOUR AND TOOLS ARE MADE THE NORMAL WAY

+Added tools for each ore set

Feel free to add some suggestions in the comments.

how do you show the crafting recipes like that?

@#3 To get the picture, you have to click on the green button in the crafting recipie area in MCreator.

@#3.1 What green button? I tried the yellowish one that looked like a file with an arrow but it didn't put it in the image format so it didn't work!

I have a problem on the Block creations, all my blocks have a Plant form, not a block form :( can you help me???

@#8 There should be a drop down menu on the right of where you select the texture for the block. Make sure it's set to circular. (Don't ask me why :D)

Hey quez, linked to this mod at my mod https://mcreator.pylo.co/modification/34731/millionores i used some of the textures :D hope you don't mind.