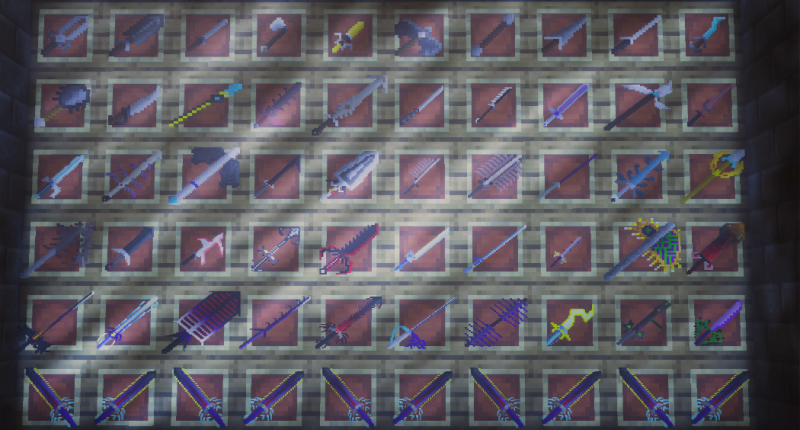 True Weaponry is a mod created by me, Ignition528, that adds 51 new weapons to Minecraft. All the weapons that this mod adds are unique, having a different texture, stats, and even abilities. All the weapons are craftable, and even more, all the weapons have different rarities. The better the rarity, the better the weapon. This mod works for 1.16.4/5. If you'd like to support me, you can give me weapon suggestion, tell me about bugs and most important, subscribe to youtube channel, as it helps me a lot. Also shoutout to MCreator for making this mod possible. MCreator: https://mcreator.net

Mod showcase: ( will be uploaded soon )

There are 5 different rarities:

All the weapons have their own recipes, but there are a 2 important things to mention:

1. Most common+ tier items are created by combining other weapons and some items

2. Most weapons have a core item.

Core items are just some special items that are needed almost always in the crafting of the weapons, and each rarity has it's own core item:

For the recipes, I highly recommend using J.E.I. as there are too many recipes to show.

Mods that work pretty good with this mod:

You are allowed to make videos about this mod, place it in modpacks, anything literally except reposting without my permission, as long as you put the link of the mod and the link of my youtube channel in the description. I would actually highly appreciate if you did so.

This is really cool! Did you make the textures yourself?

Thanks, and yeah, I did so.

I don't like HD textures too much, but this looks really nice.