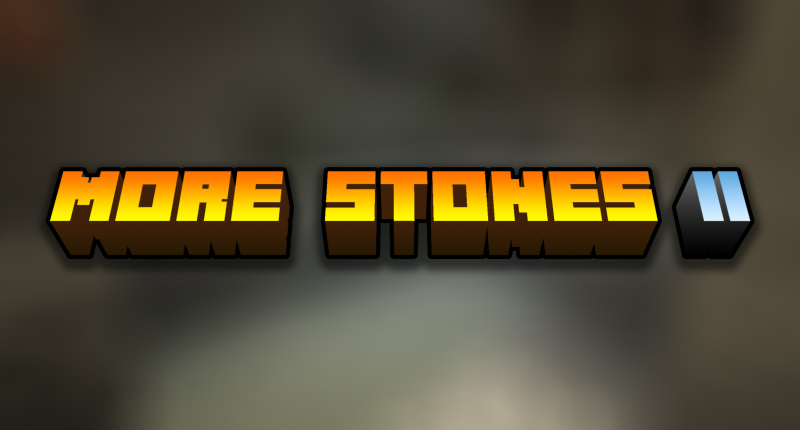 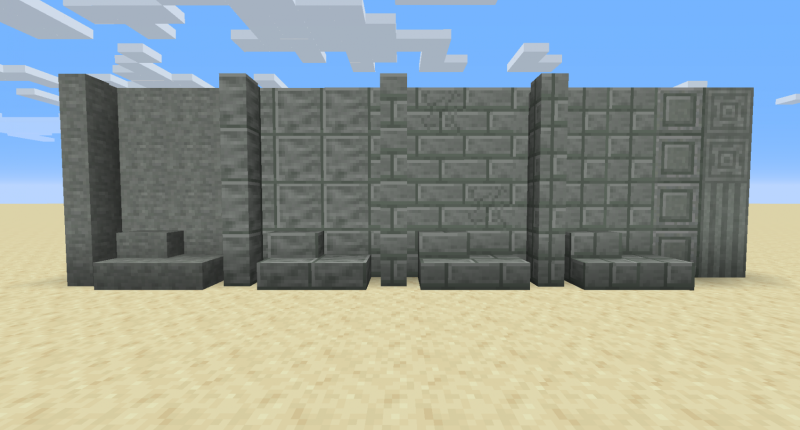 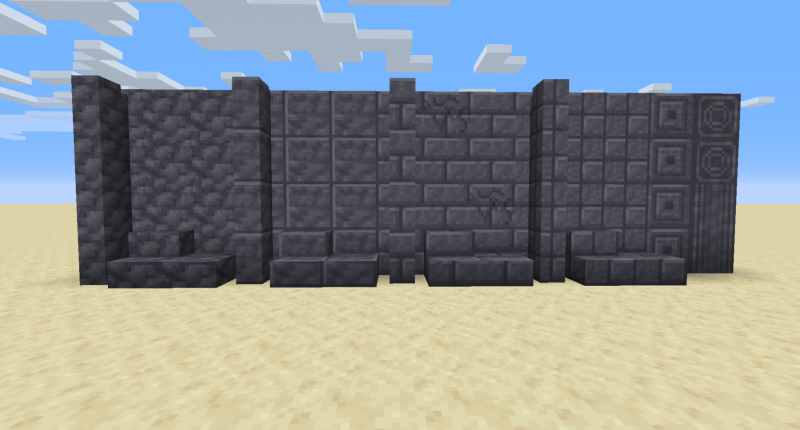 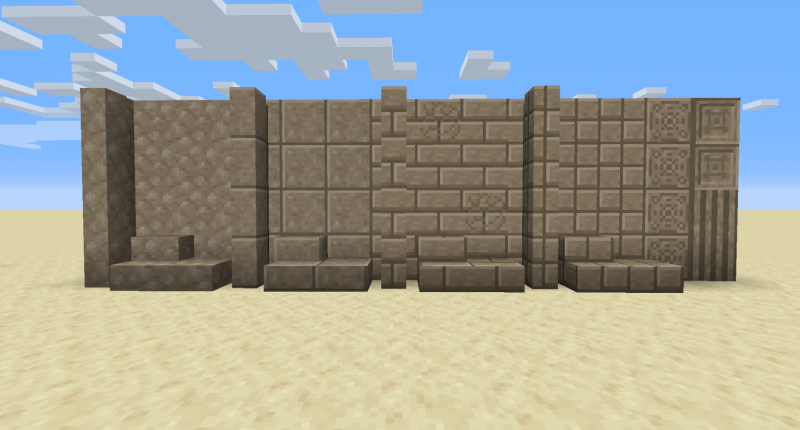 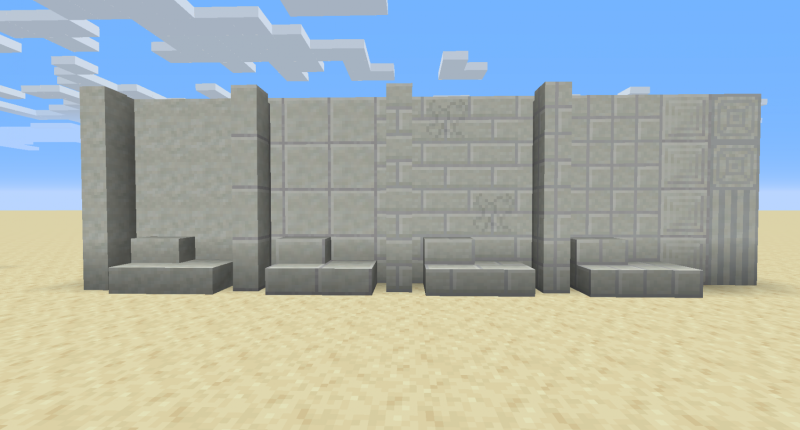 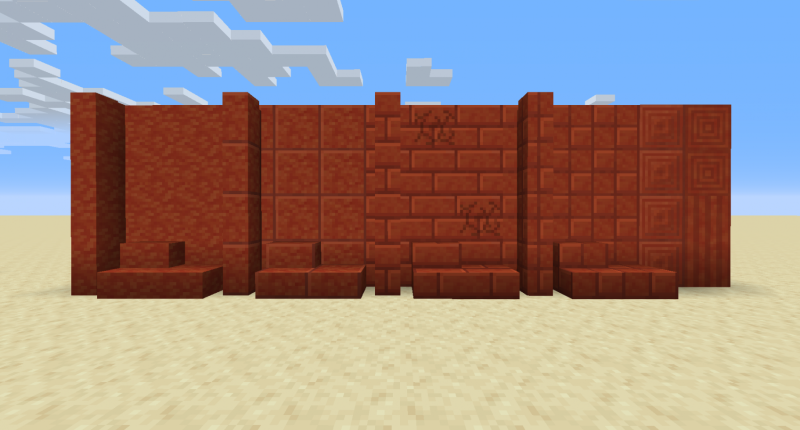 This Mod Is Also Available On CurseForge: HERE

More Stones II adds many new different stone types to Minecraft. All of the stone types in this mod generate in the world. All of the stone types also have variants, these include Bricks, Cracked Bricks, Tiles, Polished, Stairs, Slabs, Walls, Brick Stairs, Bricks Slabs, Brick Walls, Tile Stairs, Tile Slabs, Tile Walls, Polished Stairs, Polished Slabs, Polished Walls, Chiseled Bricks, and Pillars. All of which can also be crafted in survival mode. (Stone Cutter Recipes Included) The recipes follow the same style crafting as Vanilla Minecraft stone types, The Various stone types spawn in veins/blobs almost identical to Granite, Diorite, and Andesite. However, to keep the caves less crowded and to add a touch of realism ALL stone types in this mod spawn in certain biomes ONLY. To find out where you can find a certain stone type check the biome(s) in the parentheses next to the stone type.

About two years ago I (Glitchy) began modding for Minecraft. One of my first released mods was the original More Stones mod, It ran well with older versions but when it came to newer versions of the game, the mod would cause serious problems in worlds. The mod also did not run well with other newer mods. Instead of fixing the many errors of the old mod I decided I would completely restart and create a new and more polished version that would include more features and stone types. If you happen to want to try out the original More Stones I highly advise against it due to the multiple problems it causes with other mods.

If you want to see all pictures of these stone types go to Images on curseforge!

We plan to work on this mod as long as people enjoy it and regularly put out content updates. The point of this mod is to add new stone-based, vanilla styled block pallets that players can use to make builds with. and we want to add at least 25 block families by the time this mod is done with content updates. We also want to add more block varieties such as mossy and cracked versions of these stone types. As well as new blocks we also want to add cave biomes once Minecraft 1.18 is released. We've came up with a few ideas such as "Norite Stripe Caves' and "Verglas Spike Caves" which are exactly how they sound. However, Glitchy is the only one who draws the block textures and he's also the one who creates the initial blocks in the game so we can only do so much at a time. We are always open to suggestions for new stone types and ideas so if you have any either put them in the comments.

If you run into a bug while playing with this mod or have an issue relating to this mod please let us know. This mod is already has been polished and tested but bugs still happen so don't hesitate to tell us. You can let us know by telling us in the comments of this project. We will regularly check this page.

Soul Stone is kinda tricky idea for Quark compatibility - Quark adds Soul Sandstone, and your mod adds its counterpart for Soul Soil, I like it! :D also, I really like the details on each stone - one would say it's only adding coloured stone, but I see the details on each of them and it's really cool.
I'd suggest one thing tho - crafting recipes or renewability mechanics for them, like you can make cobblestone farm or craft andesite from diorite + cobblestone. It would be great, since I really prefer having endless resources, and it's already used by vanilla stones. It can be pricy to balance it being in certain biomes.

I'm glad you like the texture and I thought the same way about them being "colored stone" so went ahead and upgraded some of them in version 1.10. I also considered doing renewable stone recipes but I have no idea what they would be made of so I might have to do some research for ideas.

If you don't want/don't have ideas for recipes, there is always room for mechanics of generating such stones with fluids. For example, if lava flows into soul stone, and there will be limestone nearby, it becomes laterite ^^
I will make 1.17 stones renewable that way, so I think it can be helpful with your case as well

Thank You, I changed some of them in the more recent update but I hope you still like them.