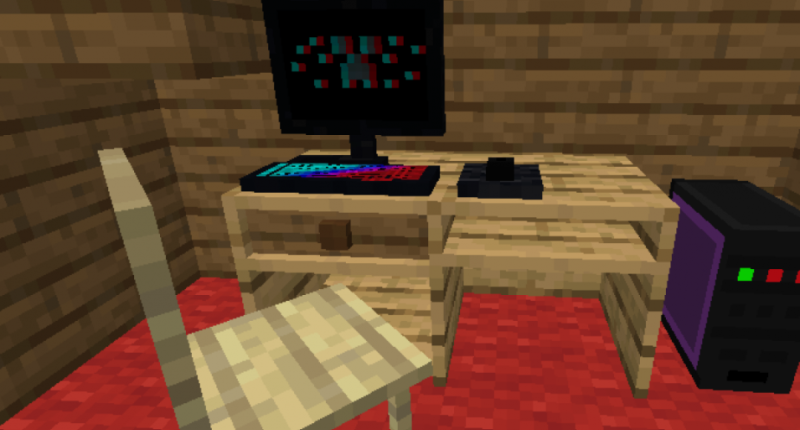 Decoration and Furniture is a mod that adds over 500 blocks to the game, some items, 2 structures and even some food, you can use this mod to build maps or just in your survival world

This mod can be used for servers and modpacks

Currently, this mod isn't getting updated frequently because of some real life problems, lack of interest and a lack of time, but I'll try to update it, even if updates are really small and take a long time, I'm sorry for that

This is what the mod adds up to the newest version:

-A lot of furnitures, like tables, desks, chairs, wardrobes, etc

-More of bricks and new variants of bricks, like crimson and warped mossy bricks or brick columns

-A lot of small decorations

-2 Structures, one spawning in the end and one in the overworld

-Other small things not listed here

-IMPORTANT: Most items/blocks ids have been changed, so if you have an existing world with this mod, do NOT update the mod, if you do so, most blocks will disappear, be careful

-Added variants for deepslate, blackstone and other bricks

-Added a new igloo structure where you can find ginger

-Renamed the tab "Halloween" to "Seasonal"

-Changed the names of some items

-Changed the model of brick piles in the inventory

-Fixed a bug where you could duplicate iron

-Gardening shears sometimes did the wrong sound when used

-Some blocks had an incorrect harvest level

-Fixed some other bugs

Changes:
-Changed the recipe from the traffic cones: Now you get 2 instead of 8 cones
-Ebony and ghost planks can now craft sticks

Very nice but the living wood is very scary