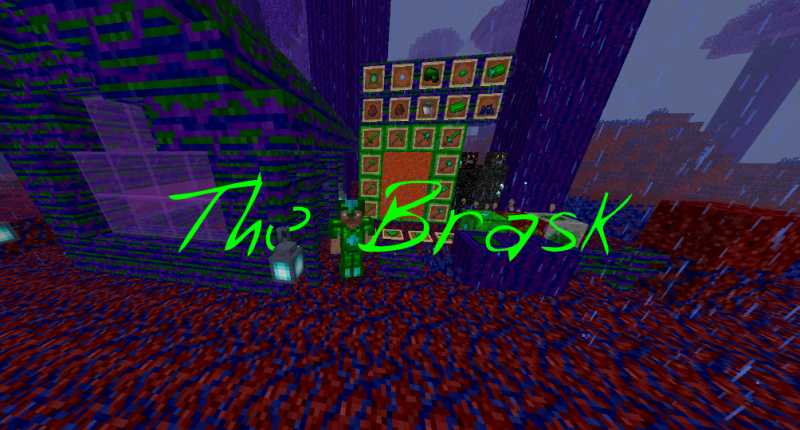 A few items from The Brask 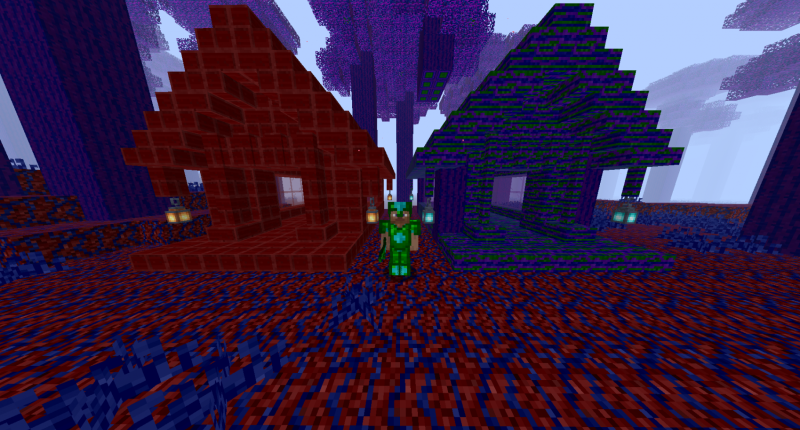 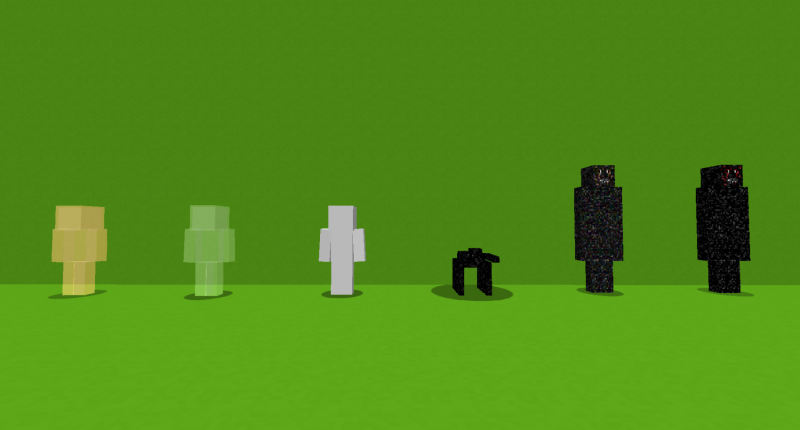 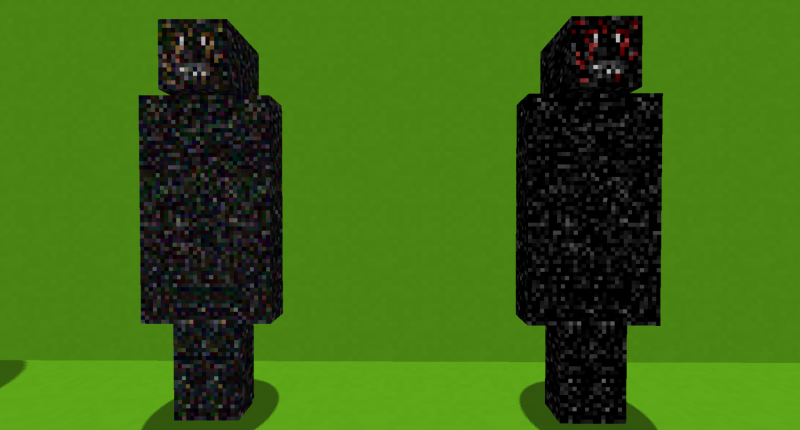 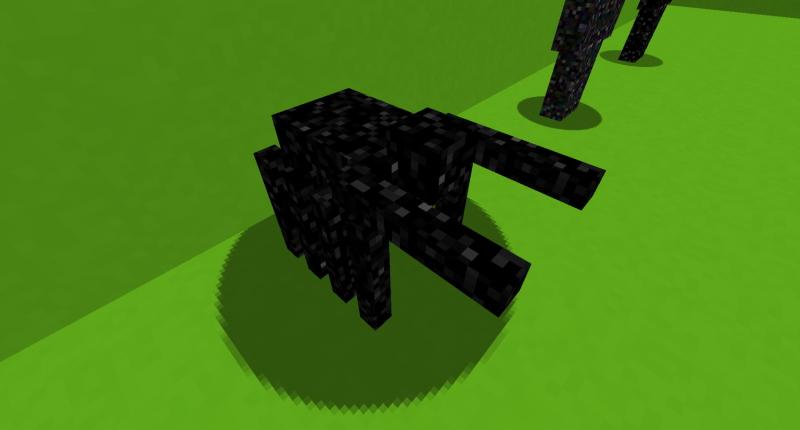 IMPORTANT: GEMINES TOOL CRAFTING RECIPES ARE BROKEN IN 0.8.0. USE 0.8.1 FOR FIX! YOU CAN UPDATE WITH NO ISSUE.

Also check out my other mod: UNT! - https://mcreator.net/modification/87116/unt-unrealistic-nuclear-things

MCREATOR NOTE ONLY: I HAVE NOT COMPLETED ENCASED SOUL SOUNDS. THE HURT SOUND IS THE SAME AS THE WANDERER AND THE DEATH SOUND IS THE GHAST DEATH SOUND. I WILL FINISH THIS NEXT BETA BUT THIS STUFF TAKES TIME. Welcome to the Brask! This dimension mod adds many new items, blocks, and entities. Enter the Brask by traveling through a portal made of Gemines; the coolest thing in this mod. Gemines can be found underground in ore veins. Mine and refine it to obtain pure Gemines ingots! Combine Gemines with Glowing Cores (which are made from Netherite and some other stuff) to get Glowing Gemines which is stronger than Netherite! Gemines has a very high enchantability rate, meaning you can easily obtain the best enchantments for your new shiny, green armor! Can't find enough Gemines to meet your desires? Craft an Igniter and enter the Brask to find far more Gemines than you will ever need! 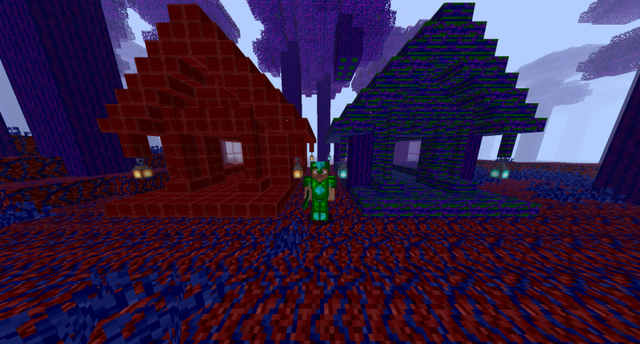 In the Brask, you can make houses and buildings out of the different variants of wood and stone that are provided. You can also find structures such as the Forgotten Library and Wanderer Safehouses that will provide you with many useful items (and shelter!). You can also make Srakened Glass by smelting Barren Srak in a furnace to add to your ambience. 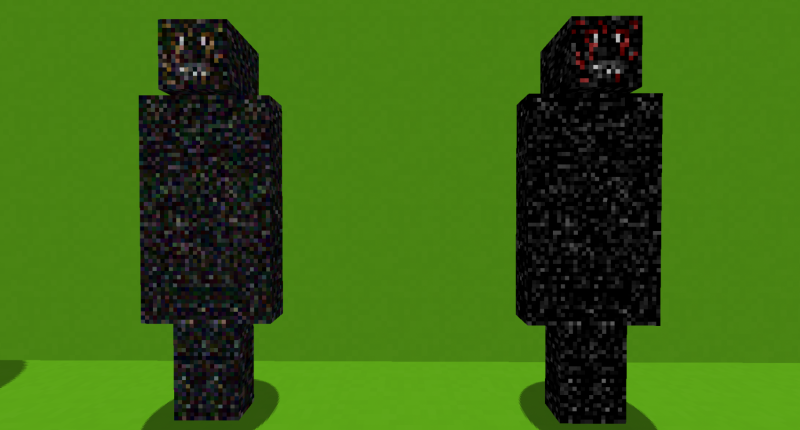 When journeying through the Brask, you will need to watch out! Brasken Wanderers lurk around all throughout the Brask! These hideous entities will attack on sight and call all of the nearby Wanderers to attack you. They are insanely fast, so be on high alert. Not afraid of Wanderers? Introducing the Brasken Crawler! This little spiderling will knock you super far and deal a fair amount of damage! You definitely want to stay clear of these guys! Also their whispers are super creepy. You're welcome. Bored of the Brask? Well you shouldn't be since I add things almost every day... BUT if you are, you might want to start creating Encased Souls (all variants on left). When you place a Soul Box and click it, you will be presented with an invulnerable entity that will do nothing. To activate it, simply click it with a Soul in a Bottle (read Soul Bottle lore for information). If you give it a normal Soul, it will be passive and just stand around (DON'T PUNCH IT THOUGH!). If you give it a Dark Soul (PLEASE NO!), it will summon a beast that will destroy anything in its path! You can also create this beast by punching a passive soul. PASSIVE SOULS WILL HAVE TRADES AND STUFF SOON SO STAY TUNED!

If all of these reasons don't convince you to try the Brask, then why are you still here? Go download it now below!!

I'M MAKING A WIKI! I will link it here once it has enough content.

Upcoming Features (Next Update): New passive mobs. Another type of ingot/gem with armor and tool variants (I like to add colors for cosmetic purposes so the next one is blue). Two new plants! Also if you guys have any ideas please share!

Check it out on CurseForge! - https://www.curseforge.com/minecraft/mc-mods/the-brask

Check out my Discord Server for exclusive updates! - https://discord.gg/FW9me3ggG3

NOTE: THIS MOD IS IN BETA SO PLEASE DON'T BE RUDE ABOUT ISSUES. PLEASE REPORT THEM INSTEAD AND I WILL DO MY BEST TO FIX THEM!

Latest Version - 0.8.1 - Fixed Gemines Tool recipes (I'm not going to call this a micro update since this is a big problem)

0.8.0 - The Cutest Update - Added the Doron; a new and very cute passive mob that can be found in The Brask! They will drop Doron Meat of death which can be cooked for the highest saturation in the game! Also added Gemines Stairs, Slabs, and Walls. Also I forgot to mention that I added a crafting recipe for Gemines Dust although it does nothing at the moment (IT WILL DO SOMETHING SOON!!). Also added lore to many items. You can now upgrade your Gemines armor to Tintium armor and vice versa so that you don't have to have Glowing Gemines before reaching the same protection as Diamond which is a problem I thought of. Have fun!

0.7.0 - The Shiny Update - Added Tintium with Ores, Tools, and Armor. Also added Tintium Block. Added Brasken Stick. Make Tintium tools only craftable with Brasken Sticks. Added Brasken Trapdoor and Brasken Door recipes (somehow I forgot to make them previously). Added recipes for all Tintium Tools and Armor, as well as Smelting recipes for Gemines and Tintium Ores (only the raw variants could be smelted so I had to fix that). Added a lot of Advancements (FIND THEM!!)

0.6.0 - The Stalking Update - Added Brasken Stalker. Brasken Stalkers are a new mob that will watch you from a distance and try to avoid you. If you manage to hit them though, they will attack you. Thankfully their health is fairly low so it is not hard to kill them. Made Withered Brasken Wanderers spawn in the Overworld occasionally. Trust me they are rare. BRASKEN STALKERS WILL GIVE YOU A BAD EFFECT WHILE THEY LOOK AT YOU IN A FUTURE UPDATE. PROBABLY 0.7.0. Have fun!

0.5.1 - Completely removed Brasken Fluid. It just didn't meet my expectations. Water is now the primary fluid in The Brask. All water in the brask is now red. Also if you guys didn't notice, 0.5.0 changed the fluid to water but I didn't say anything because I forgot. NOTICE: IF YOU HAVE A BRASK DIMENSION IN YOUR SAVE, IT IS RECOMMENDED TO MOVE EVERYTHING OUT AND DELETE IT BEFORE UPDATING TO 0.5.0 or 0.5.1. WATER-BRASKEN FLUID MECHANICS WILL CRASH YOUR GAME. I don't know what will happen to worlds that HAD brasken fluid but now it is removed. Expect issues if updating. Added Brasken Vines. I wanted to for a while but I was still figuring it out lol. They do not generate naturally yet. Expect that in 0.6.0. I am currently working on The Brasken Guardian (and a new mob), so stay tuned. Sorry for the wait! It takes a long time to model and script a boss!

0.4.0 - The Perfectly Balanced Update - Balanced Gemines Armor and Glowing Gemines Armor as well as all Gemines and Glowing Gemines tools. Regular Gemines now balances well in between Iron and Diamond Armor. Glowing Gemines now balances as better than Netherite. Also added Brasken Crawler. The Brasken Crawler is a new spider-like entity that whispers in a very creepy tone. They can easily swarm you and eliminate you. This is not the final update for Crawlers, so stay tuned. BOSS COMING IN FIRST FULL RELEASE!!!

0.2.01 - Fixed Gemines generation. They now spawn from Y 0-64 with 18 veins per chunk and about 3 ore per vein (each ore yields four raw ore). Previous versions do not seem to generate ore, so please use this version or later for Survival.

Beta 0.2.0 - The Beta Update - I have decided to go ahead and migrate to Beta. Not much has changed since the last Alpha, but there are a couple. Added "Gemstone" Creative tab. Moved a few items under the Gemstone tab. GEMSTONE IS NOT OFFICIALLY ADDED. IT IS A PLACEHOLDER. IT DOES LITERALLY NOTHING. If lightning strikes a normal Brasken Wanderer then it will instantly kill it but spawn two powerful Withered Brasken Wanderers (WBWs still spawn naturally, but rarely). Added Srakstone Coal Ore. Added a lot of various tags. Random Bugfixes.

Alpha 0.1.3 - The Structure Update - Added three new structures: Wanderer Safehouse, Ruined Wanderer Safehouse, and Forgotten Library. Safehouse aren't extremely common, but they provide valuable resources if you can find one! Forgotten Libraries are extremely rare and are great structures to build a base in. Also you might want to check the attic... Also did various bugfixes and added Srak Glass, Srak Glass Panes, and Brasken Trapdoors.

Alpha 0.1.1 - Added Srakstone and variants. Still working on getting the above-ground Wanderers to spawn...

I love the avocadoes!

What are you smoking? I don't have avocadoes lol.

Lol. I fixed generation btw so make sure to get latest

If you like the mod, please upvote it! I am adding new things every day! (NEXT BETA WILL ADD A NEW MOB!!)