MCreator for Minecraft 1.9.4 is finally here. The delay with this update was due to large amount of bugs that we decided to fix and some of them took some time to figure them out. This update is therefore not only Minecraft version update, but bug fix and performance update too. It also introduces some new and neat features. Check it out!

This MCreator is made for Minecraft 1.9.4 and uses recommended build of Minecraft Forge 1976. All mod types were updated to new version. We have cleaned up the code of MCreator and its libraries and removed large portions of unused code. As a result of this will be better performance of MCreator, smaller resource consumption and increased speed and responsiveness of the interface. 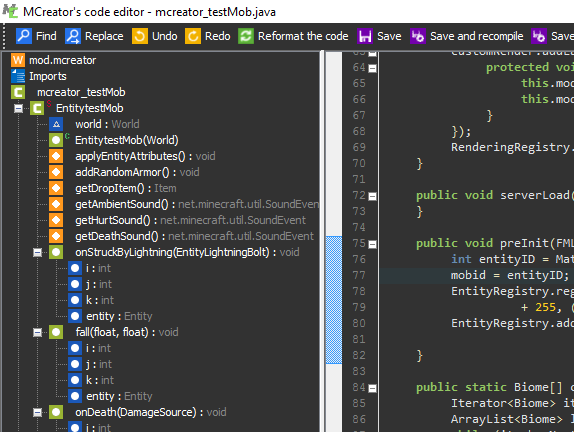 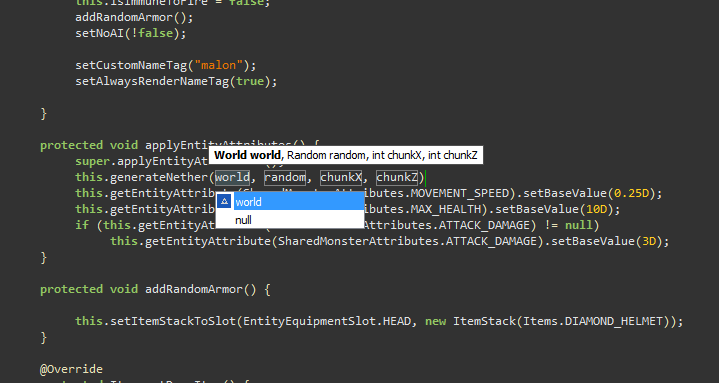 New autocomplete assistant is much smarter and better

We have improved code formatter in code editor. The code generated with MCreator is formatted by default using code formatter similar to the one found in Eclipse IDE. On top of that, we made import formatter which removes all the unused imports from generated code. As a result of this, code generated by MCreator now looks really nice, professional and is also much more readable which makes it great for new programmers to easily understand the code. Code editor was also improved. We have added back autocomplete which now works much better and is faster. We have improved the outline generator and added error bar which shows the location of the errors in the code itself.

We have also made some small interface improvements such as new colors and new icons on some sections. Due to large amount of changes in the core of MCreator, you cannot import old workspaces into this version. This is partly also due the fact that many things in Minecraft and Minecraft Forge changed and it's impossible to automate the update task.

Many mod types now support items and blocks with metadata which introduces many new options for the mod creation. Gun bullets can now also be blocks, user can now set potion effect levels as the event result, custom mobs can now wear equipment in both hands and much more. We have fixed custom sounds which didn't work, we have fixed some events and conditions, custom trees in biomes didn't work, mob equipment was not visible and many other fixes. Check the changelog below to see them all:

Please leave a comment and share this post if you liked it and don't forget to leave your opinion on this update. We have also added internal website search if you haven't already noticed. You are welcome to use it as you can find many useful information with it on our website and our community.

please add a local variable on blocks and items

@#2 Good idea :) In fact we already plan to do something like this in the future so stay tuned for this.

@#2.1
oh, thanks.
still it would be nice to add the creation of potions, enchanted books...
localization

I get compilation errors when adding certain tasks to a mob. It seems to be specifically tasks that involve interacting with other entities, like watching or attacking.

@#3.1 So in case you don't select EntityPlayer, it works. Could you please send a bug report with error log so I can inspect the problem?

@#3.1.1 OOOh, I see what happened. You made a typo in the task for being aggressive against player. It says EntityEntityPlayer when it should just say EntityPlayer

nevermind, no big deal, I can just edit that

Oh by the way, th@#3.1.1.1.1 EntityEntityPlayer wasn't the only typo. I noticed it with other vanilla mobs as well. I forgot to mention it because I never really used them.

Oh and to add to my idea of have ranged mobs, maybe even have options to make a mob shearable, milkable, tamable, and rideable (with a visible saddle when placed), No rush though. I'm more interested in ranged mobs, to be honest. There's already way to many animal mob mods anyway.

@#3.1.1.1.1.1 We might implement these ideas. And I have noticed that Entity bug is present for all types and already fixed that.

Isnt it possible to link mcreator to eclipse code editor? like a plugin.

@#4 You can export the workspace to Eclipse but the better option is to wait for the next update which will integrate MCreator IDE which will be in fact similar to Eclipse but made specificaly for Minecraft mods.

@#5 Sorry, but this is true. There was no other option right now.

@Klemen did you fix the keybind and the overlay on server bug? because if i create a overlay and join a server, minecraft crashes :/ that also happens with keybinds!

@#7 I think the server might just be preventing any client mods...

I've been seeing many people have a bug where the select texture popup doesn't pop up for pretty much everything except blocks.

@#8.1 Klemen! Why me not allowed to write in forums?
That's why I ask you : how do I upload my model of techne on mcreator ? (block)

When I Click MCreator.exe it don't open the mcreator please help ;(