After 3 months of break, new and big update of MCreator is here. MCreator 1.7.1 for Minecraft 1.10.2 introduces many new features and bug fixes and greatly improves mob creation. Click read more to learn more about this update right now!

You can find MCreator 1.7.1 download link in our downloads section.

The first and the most important thing base on many user requests are many changes regarding mob creation. Now your mobs can have particles spawning around them, mob drops are optional, we have improved mob AI system, mobs can be ridden, ranged or breedable if user selects so. You can choose the bullet type for the ranged mobs, select item that will trigger breeding process and much more.

Another big change are many improvements and fixes on the user interface of MCreator. Major changes are greatly improved code editor with much better project browser and improved workspace view. A new tab in workspace view was added and is called resources. Here you can find all the resources that belong to the current workspace. You manage them from there and this includes removing them if you don't use them or even editing them using integrated picture editor which was also improved. If mod uses textures, MCreator will try to recognize them and in case if it manages to find a texture, this texture will be shown in mod element list instead of the generic mod element icon so the user can easily navigate through his mods.

Workspace management system was improved. We have fixed many bugs that could potentially break workspaces of users and made MCreator more reliable because of this. Workspace switching is now faster. Mod element removal system was refined to fix some problematic bugs. Now each workspace holds its own resource set so they are no more shared between workspaces so each mod will only have its own resources that are required by mod elements. This will reduce the size of the final mods made by MCreator and also protect your resources that you do not want to include in the specific mod.

Clear workspace button was added which will clear your current workspace (remove all mod elements, resources, models and sounds) so you can start you work on specific workspace from ground up without having to factory reset or reinstall MCreator. 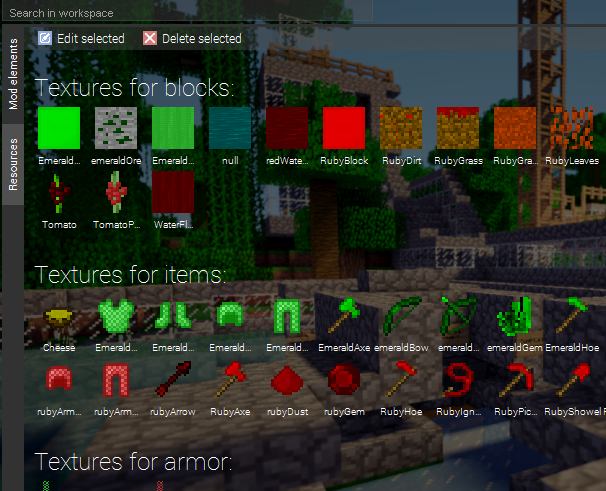 As I have already mentioned, project browser in code editor was improved. Now you can open decompiled source code from it so you can view and learn from it so you can make better mod or even add new functions based on existing code. Search in the workspace file tree was also added alongside with search in all files option that searches for the given string in all files of the workspace including decompiled source code. New packages and classes can now also be created from the project browser.

Jump to declaration function was also added inside code editor source file view. If user Ctrl clicks on part of the code, MCreator will try to find the declaration of the selected code part and open it for you. This is a very neat feature for advanced mod developers but keep in mind that only limited set of declarations is supported for now.

Some error logs in MCreator's console are now clickable and in case if the user clicks on them, MCreator navigates him to the location of the error inside the code.

Full changelog can be found below:

Don't forget to comment this post to let us know what you think about this update and which added feature is your favourite. You are also welcome to share this post with your friends so no one misses this update. Stay tuned for new tutorials that will be posted on our YouTube channel soon.

PS: If you missed our website update which introduced user points on MCreator's website, read more about it in it's official release article.

Can I import 1.7.0 workspace without errors?

This update is bigger than i thinked!

@#3 Well this is one of the reasons why it took so long for this update to be released.

@#4 Yeah, actually some things have changed since the pre-release version you got :D

Nice, but could you improve events someday? A function that will execute many events in a specific order would be really cool to have.

@#5.1 What about adding a tick so there may be a delay between the stacked events? And yeah, I downloaded MCreator 1.7.1 official because I knew that would be best. I used all my data though :( lol

@#5.1.1 Sorry to hear this :( I have tried to implement tick delay but I have not found working solution yet.

@#5.1.1.1 Its nice to know you have at least looked into it. I just know that it would offer more control over how your stacked events work :).

@#5.1 what about item cooldown? Is it possible to achieve this with variables? I mean something on the lines (item may activate if 0) when you click (item gains 20 sec or 100 ticks, so then variable states that? Sorry not the best of explanation. Basically, is it possible to make item (gun,staff etc) cooldown in MCreator 1.7.1?

@#5.1.2 I think that without manual coding, this would be kinda hard to implement right now.

HAHAHAHA!!!! Finally i can return making my mods!

Klemen THIS IS AWESOME. My Blue Mod now can have a wolf that's tamable and a pig that's rideable, tincture :-):-D＼(^o^)／

Some Features here are the ones that i really want Klemen like the Mobs Update. But can you made some Dimensions and World Type Updates like a certain Dimension has Multiple Biomes in it instead of just one? or add a new world type on the "More Options" section before you made a new Minecraft world?

@#8 Multiple biomes in one dimension is a feature available in a few recent versions of MCreator. Just use + sign to add more biomes in dimension creation.

I got caught up in, plugins, maps, and other things in Minecraft, so i ended up putting my current mod (which i almost finished on hold) Soon i almost just stopped Mcreator entirely, but when i came back onto the website and saw that the next update would have the new mob features i decided that i would finish my mod when the new update came. Now i plan to do just that. I am very happy with this update, great job Pylo!