The biggest change in this release is full and official Minecraft 1.18.x support for Java and Bedrock edition. The generator builds on 1.17.x generator and improves it, so the code of this generator will be even cleaner and more performant than before!

One of the most requested features we have seen in the past year is now here. Support for nether biomes! With a single check on a checkbox, you can now make your biomes generate in nether alongside other nether biomes. See a demo below.

And nether biomes were not enough for us. So we have also added support for custom overworld cave biomes. Below you can see a custom cave biome we added to the Minecraft.

We have extended our offering of built-in models with the following new models: cod, ocelot, piglin, salmon, witch. 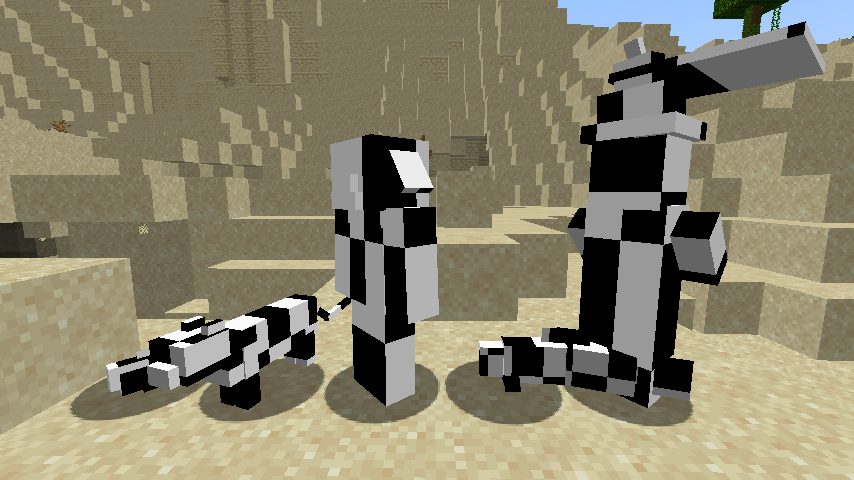 Alongside new models, new entity model conditions were added that allow you to procedurally make the entity transparent and/or shake similar to how striders shake. 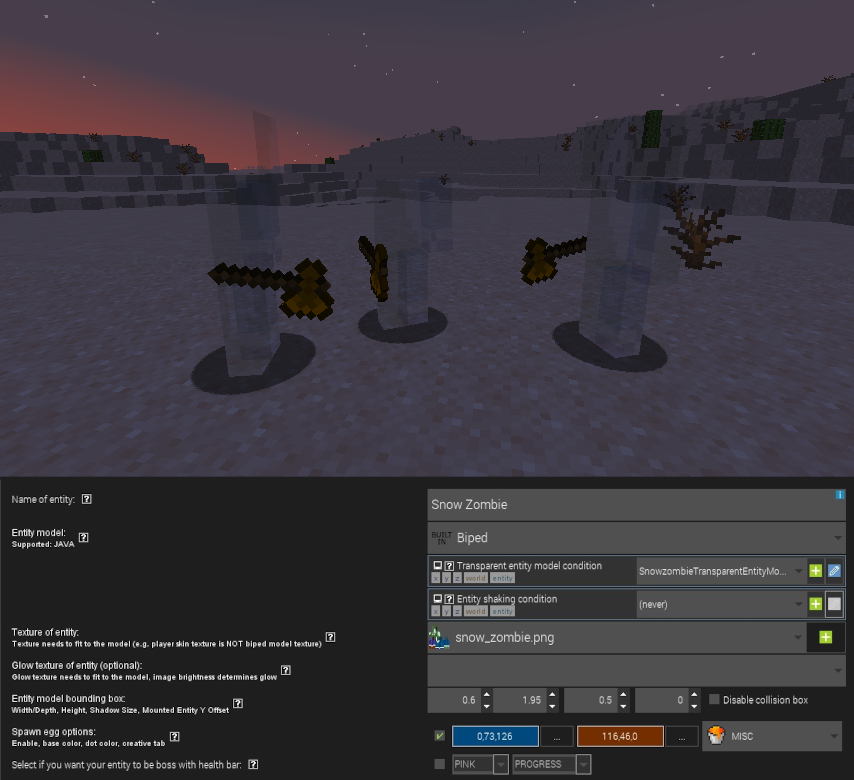 New Minecraft 1.18 features allow for different ore generation shapes and levels below 0. We have made sure to support that for custom mods too.

Did you want to easily add new items to your project file structure? To make this possible, we have moved the toolbar of the project browser to the adaptive context menu that shows different entries depending on the element you have selected. It adds some new features too, as you can see in the video below.

Did you happen to get the "undefined" list entries bug in procedure element selectors, such as entities dropdown? Well, this bug is now fixed, but we have also improved the selection process to include a search bar and icons for custom elements. Check it out in action below!

We have added a new local variable type: entity. This variable type can also be used in return values and called from another procedure. This should make writing complex entity selection algorithms, for example, easier. 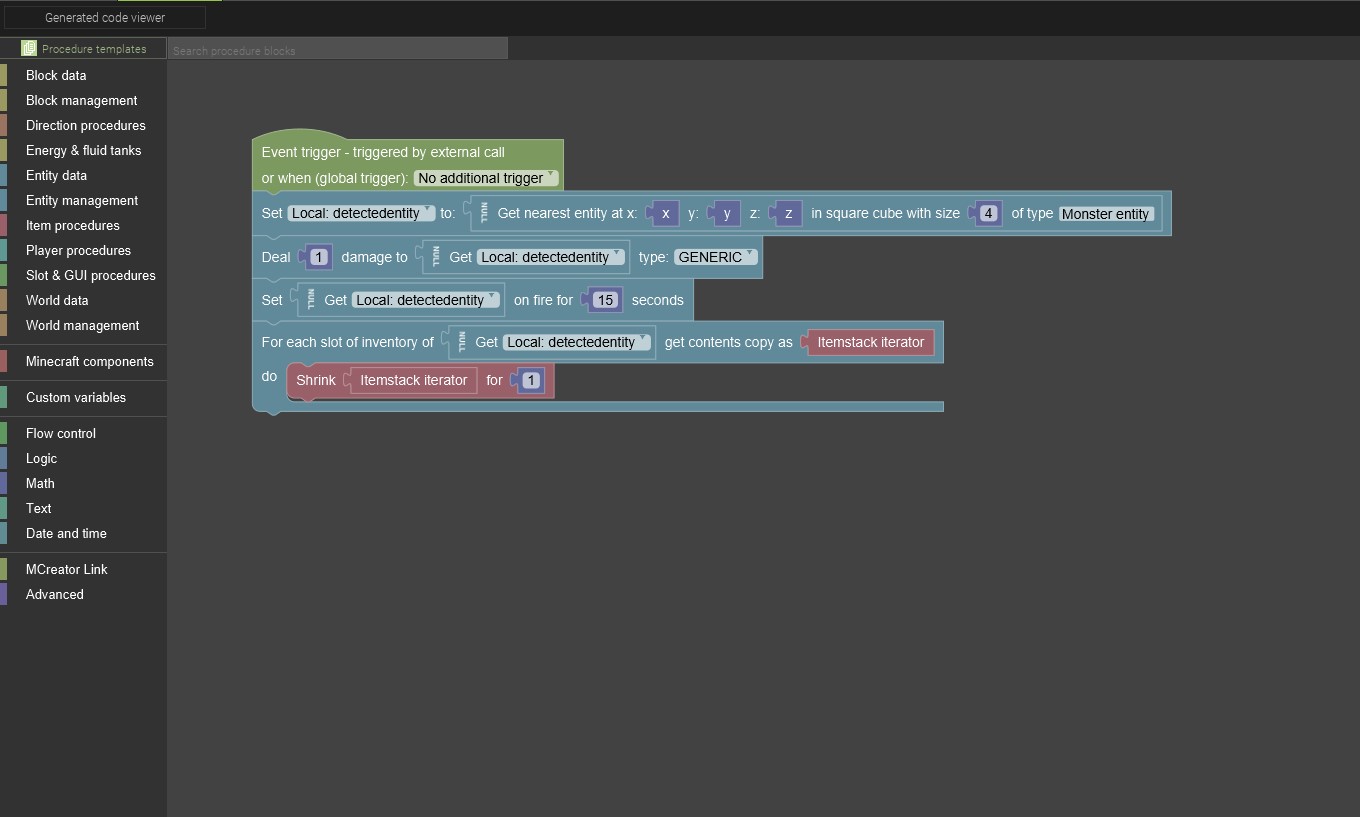 You wanted random in-range procedures more easily and we listened. Now you can generate numbers or integers in range with a single procedures block. We have also added procedure blocks to obtain a random item from the item tag or a random block from the block tag. 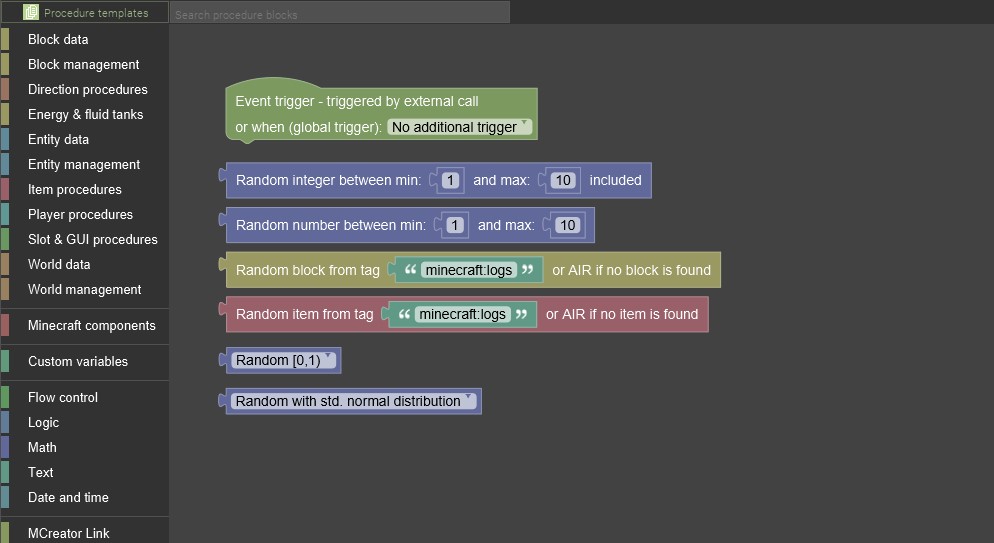 Tell us what you think about the update in the comments! If you like what we do, consider donating to help us keep this project up.

UPDATE: We have released a patch update to fix some bugs found in the 2022.1 release:

To install the patch, re-download 2022.1 and install it again. Make sure to uninstall the current version first.

and the fact that biomes in the upper world will not spawn is it a mistake or is it just me?

Why is there no food

And can you please merge some of the pull requests into Creator on GitHub?

I love this new version, it adds so much and is a lot better than the previous, but kind of sucks that the food element was merged with the item element :/

It gives much more opportunities to foods... so this is in your interest.

Will it be possible to put cave biomes into a custom dimension?

Note: I may have said this before, but what I got as a reply did not work, and it still doesn't on the release.

So, I updated my mod to 1.18, it stopped compiling correctly. It keeps giving me the error: package <mod id>ModPotions does not exist.

Any help would be appreciated

In most cases, regenerating the code should do the work

I was playing around with it a bit, and the edits I did to the root always reset when I rebuilt the code. Is there any way to lock the root? It won't be ideal, but it might work.

(It tries to register the potions package, but does not import it)

I have tested it that if I edit the same file in visual studio code and save the working code after it resets, it does work.

If possible, please open a github issue and attach your workspace that is causing this. Thanks!

Im having a problem where if i try to test my mod out it says that the data pack was made for a older version of minecraft, any ideas on how i fix that?