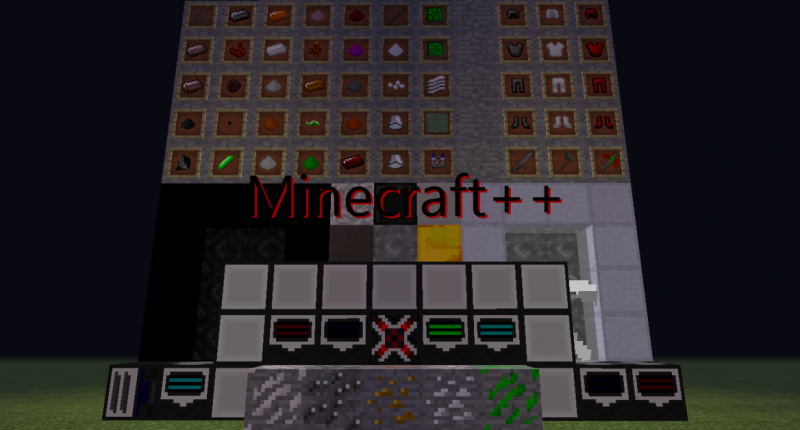 It has been more than 5 years since I created this mod. While it has its flaws, I am still proud of it and consider it to be a pretty decent mod, especially for what both I and MCreator were capable of at the time. I noticed that it has gained downloads since I last checked (over 1000, which I guess is a milestone), and is still occasionally recommended on this site. As people are clearly still looking at this, I figured I should finally get around to changing the project status, as the project has not been "in development" since 2017, and offer some sort of explanation for the future.

So why am I here?

Armed with a newer MCreator version, actual Java knowledge, and an extra braincell, I have returned to create a new mod, much larger and more polished than this one (and hopefully without as many game-breaking bugs), that will still include many of this mod's core features. It will be updated to 1.18.2, and will (eventually) contain a massive amount of endgame content, the slightest quantum of game balance, and one or two actually functional energy systems, while retaining the technology, humor, and general spirit of overkill of Minecraft++.

Development towards this new project will only last as long as my attention span and other responsibilities allow. I may never get the project to a point where I feel it is worthy of being published. That being said, I will try to throw at least something out there, hopefully better than Minecraft++, that people actually feel like playing. I might even continue my MOTW streak, you never know.

Until then, feel free to download this mod for whatever reason.

Yes, RRF is a poorly implemented global variable that can be easily abused. There is no Ore Dictionary capability whatsoever. The Singularity Storage Unit doesn't work as advertised. Epaxitite will lock you in an infinite death loop if keepInventory is on. The Redstone RRF Generator makes way more power than it's supposed to. The Nether Star Generator, Bedrock Extractor, and Understone Tools are ridiculously overpowered. Almost nothing has a GUI. And a lot of the textures are terrible or just straight up weird.

Play it anyway. Break things. Find even more bugs. And if you ever do beat the game legit, by successfully reaching the Underworld without having an aneurysm due to being repeatedly slaughtered by the naturally spawning ludicrous-speed boss with more health than the Wither, let me know. (I'm not even sure if it's possible.)

The remainder of this description will be left as-is for posterity, even if it does hurt to read some parts.

Good luck, and have fun. Thanks for playing.

I GOT THE MOD OF THE WEEK! YES!

Thank you people for downloading! We have now hit almost 450 downloads!

If you have suggestions, write a comment or something. Thanks! I appreciate new ideas. :D

Currently I have suspended working on the mod... if anyone can give me a really good idea I will definitely add it.

1.1.1 update - adds a few new things, like the bedrock extractor and promethium stuff. And a new dimension.

This isn't exactly a mod that will kill you. (Well, it might if you hold energium for too long...) Just make you overpowered. And all those little things, like an automatic cobble generator that is way easier than trapping a wither. This mod adds in a new kind of power system, that will probably help out a lot. It allows you to store items easier and make way better tools than diamond. And kill physics and stuff.

You probably will need to download something for the recipes (at least temporarily).

If you want to put this in a modpack or whatever, go ahead, you don't need to ask or anything (just give me credit).

This mod is a work in progress, I am publishing this as a finished version but I will add more later. Have fun! :D

Hey man, i really LOVE your mod. I would like to make a picture for your mod! A proper good picture with text, pictures, author names, whatever u want! Reply if u'd be down with it! :D

@#1 I will try and get around to that at some point, that sounds like a good idea.

Omg.. This is one of the best mods CREATED WITH MCREATOR EVER!

And if u want i can make for you a more clear mod image, with better quality :)

@#5 Well basically, I put one slot in the GUI for the machines... and one slot in the inventory for the block. The GUI was bound to the block, and the on update tick function for the block I added if it has a certain item in the slot, remove the item and add to the power level (or whatever you want).

The storage system was basically just a block with a giant inventory... I turned it up to the maximum on both. :D

How did you made the RRF possible? did you used variables?

@#8 Yeah, it's basically just 1 big variable. What happens is the machine checks if there is enough RRF in order for it to work, if there is then it does whatever.

Not bad at all. May use this in a modded survival world. :)

Suggestion! Make it so the rrf overlay shows up only when a specific item is held like the rrf monitor maybe!

And where does the singularity go?