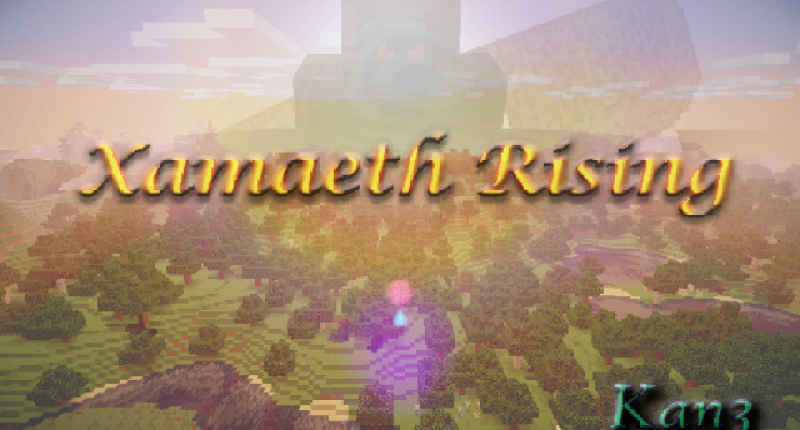 Are you ready to encounter your worst nightmare? The fallen death angel Xamaeth is coming for you!

Hi guys! This is my mod entrely made with MCreator (+ 2 codes taken from this website :P)! What it adds? Easy! ----> New armors, new weapons, new tools, new ores, new recipes, new mobs and a new dimension!

The main objective is to find how to recall from the dead, Xamaeth! The boss of this mod! Will you be able to defeat him and retrieve the ultimate secret weapon?

I will tell you a little secret... Some weapons have fantastic enchantments*, just make it! And armors? Have secret potion effects! "Craft them all!"

Note* = In creative mode, if you take weapons from "inventory", you won't see any enchanment, you have to craft them!

New recipe for make a redstone ore since it could be very hard to find "silk toouch". But why this? Simple!

A new redstone ingot! Use it to make new weapon and new armor!

You already know what it means!

And what do you think about lapislazules?

It could be really hard to make this ore without "silk touch"!

First one! Stronger than diamond!

Fullerite! Where to find this block? Easy! You have only to search in the deep!

Better than a diamond one like all the other tools!

And here the 2nd one! You can destroy your useless diamond pickaxe!

Wurtzite! Tougher than fullerite! It's the rarest material in the world, you could find it only at a certain altitude... p.s. It's really hard to find so... search higher than 80 blocks

Chromatixium! "Lovely" new ingot with all the colors fo light!

A magic staff with strange powers! You need all the colors blades! Is it worth? Find it by yourself!

Don't worry about its thinness, it hides a very powerfull magic inside!

While Here it is the last ore!

Lonsdaleite! You can find this new material only in the new dimension! Pointless to say that it is really tough!

The stronger axe in the game with a secret power!

Let's talk about the End!

End Crystal! Use them to make...

It may appear weak, but has a strardinaty power!

Not very tough, but like the sword, has a fantastic power!

This could be 1 of the more useful tool you can make! Do you remember: "silk touch"?

But now let me introduce a new material!

Try this Katana! Strong like an iron sword but with more durability and secret small power!

This material could be useful for something else too!

For a special helmet!

Do you have enough of your weak bow? Try this!

To start the hell on earth with this weapon you only have to right click on Arrow stack when you have your Autocrossbow in inventory and it's done! You have now a Loaded Autocrossbow ready to shoot!

And its upgraded version!

Starcrossbow! But you have to use these stacks! In the middle you need a NEW Loaded Autocrossbow or it won't work!

These are all night earth mobs!

New dimension is here! With his mobs and special meterial for the strongest weapons and amor!

You'll need this Hell's Hearth to enter the dimension! (Don't worry, the recipe is shapeless)

You just need 10 block of soul sand and it's done! Welcome to Inferi!

These are the Inferrack blocks, they are indestructible if you try to break them with pickaxe! So you need...

With it's special mobs!

Hell's Lord This terrible guy could drop a rare material that you'll need to create the powerfull armor and weapon in this mod!

That's what you need!

Hell's Lord ingot! The tougher material in the world

The strongest sword you can make!

And here it is the strongest armor!

And now, let me present... Xamaeth!

Xamaeth Angel Cross. You need this mysterious item to summon the fallen death angel, but don't you need anything else? Maybe some angel's "tears" from the sky.

Xamaeth The fallen death angel His strenght is legendary! Be careful.

But if you kill him, you have a chance to receive his broken scythe! So you can craft his perfect weapon! An indstructible Scythe with the power of a God

New blocks! You can make them easly with the same recipe as the other blocks (iron, gold etc.) easly with 9 ingot of the material you want!

It's the same for all the other bricks!

And you can get back your block!

Hope you enjoy my first Mod! Tell me what do you think and if there is any bug!

Looks incredible for being your first one. Good description and concept, Its content is truly massive and its a whole achievement for this to be made in MCreator (no offense to klemen but this program still haves quite some bugs). Also great textures, specially the tools, weapons and the ''Lonsdaleite'' armor. It really seems like its worth all the trouble to get the materials and gear to summon that boss. Just one question: Did you make ALL the textures?

@#2 Thx a lot!
Yeah I did :) It has been the hard and long part of the work but I liked to do it.
"hell's hearth" and angel cross a part (for cross and wings i've used 2 real pitcure and fused together, then risized)

Very nice mod!
How you mad this Textures?
:D

wow man what an amazing mod I love all the designs but the design I love the most is the lonsdaleite armor that's something I really couldn't do and I love designing but man...that's like beyond my level lol anyway great mod I rate it all the way to 100

Did you make the 3d models with techne?

Here is my review http://bit.ly/1guVhSN