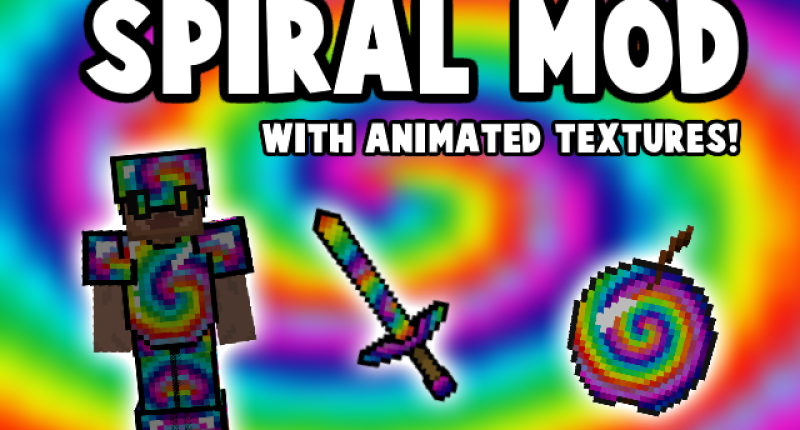 If i get enough comments to not cancel this mod, ill work on it.

If it doesnt get any comments, im gonna come back to this mod later or just cancel it.

Thank you for reading! :D (Im also making other mods of course!)

Hello! This is the Spiral Mod! It adds basic stuff like swords, armor and tools.

I didnt have much Ideas, so i thought you guys could help me out a bit and give me ideas in the comments!

Also i really took time to make the textures, some are even animated! The armor took about 2 hours to make, So i would appreciate good rating & comments!

For the textures, i used the items from the faithful resourcepack, then i added those spirals to it and edited it a bit. The armor was the hardest to make, it took me around 2 hours to make the textures for it.

For the Big Spiral Sword i used the Sword from the faithful resourcepack and pixeled the new blade into it, and added the spirals.

- Spiral Dimension (Done, doesnt have the structure for a boss yet.)

- Animate All Weapons and Tools (Done.)

- Spiral Apple (Probably not gonna do it. The Normal one is already op enough...)

Here's a little Preview of the Spiral Dimension - Spiral Armor (All Animated, except when wearing.)

- Gives you Night Vision. (Also its pretty good itself.) - When weared: You're god. You're almost unstoppable. You have probably 100 times the strength of any armor from the Superheroes Unlimited Mod. - Insta-breaks every ore. Obsidian is easy to break. - Almost insta-breaks any kind of oak. - It literally insta-breaks every type of "Shovel Blocks" (Blocks that you break with a shovel.). Its like an efficiency 32767 Shovel. - Actually, it does nothing special. Its basically a normal hoe. Maybe you could give the hoe some love and write ideas for it :C - You're even stronger than the Spiral Armor. To be exact: Extreme Resistance, Extreme Regeneration, Speed III and Fire Resistance. Also it fills your hunger all the way up. - Drops the Spiral Gem. Spiral Ore is also really rare, so dont give up if you dont find it! (Altough you can find it in mountains. Actually if there are mountains around its pretty easy to find!) Spiral Sword (There are some bugs with the crafting of the spiral sword. Will be fixed next update! But it should work fine.)

I know the mod itself is not that creative, but like i said i want to get ideas in the comments!

If you find any bugs, or need help then contact me somehow... (Maybe post it in the comments :D)

Again give me ideas and i will try to implement them!

Thank you for downloading! :D

Appararently this mod was downloaded 241 times ._.
Thank you... wow

Great Job! I love your textures!

For the ideas: If you combine nine spiral gems you should be able to get a spiral block.
Then you can make a spiral portal igniter and the to go to the spiral dimension you need to build a nether portal (But instead with spiral blocks) and right click the portal with the igniter to light the portal to spiral land. In spiral land there is only spiral blocks
and spiral ore.

And one more thing: You should make a spiral mob with 20 health and 3 attack damage. It should be called Spiral Traveler and it will attack you.

Thank you so much for the ideas and nice comments! I will try to implement all of your ideas! :D
Also im now mod of the week! :D

Nice looking mod! Congratulation to the Mod of the week. Maybe you colud add dimension where will be only spiral staircase and in middle of it will be some sort of boss.

@#6 Wow, that idea is just amazing!
Maybe i will try to make like a structure that generates, and put some sort of block into it that spawns a boss!

wOULD YOU LIKE ME TO DO A REVIEW? i WOULD BE HAPPY TO! Ops CAPS, lol ;3

@#8.1 The video is uploading right now, Ill send a link once uploaded ;D

What about a randomly generating structure? That could be cool

@#9 And your the maker of practical pranks! That mod is cool :D