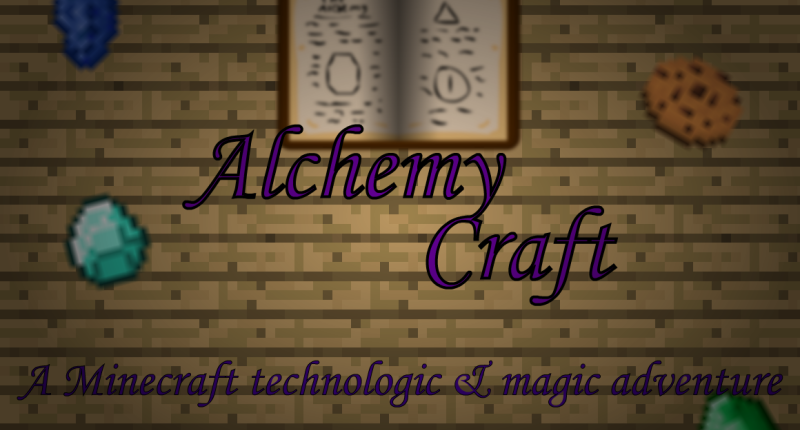 AlchemyCraft is a Magic-Technologic mod, that will add too much things to your minecraft, from new ores (all them with special magic power), until high tech heavy machinary.

With this mod, you can select 2 ways to play, The Magic Way, were you make enchantments, special potions and too much more; Or The Technical Way, were you use the same items to make heavy engeenery, or play these both! as you want!

Wait a Minute... What is the Alchemy?: In real life, the Alchemy was an art (The father of the Chemical) that tried to find the Escence of the things and the life, Why is the gold... gold, What is a diamond, Why the diamonds are diamonds, Why are we alive, What gave the live to the first human, How to create life with our hands, etc.

Why this mod is AlchemyCraft, if this also adds technology?: Because the Original idea was an Alchemy mod, and will have more alchemy than technology.

Ideas for this mod:

Remember: This mod is in Alpha (Very very early development) and may have some bugs, an all/some of the parts of this mod (mentioned before) will not be until the full version. PLAY THIS MOD WITH FORGE/MODLOADER OR ANOTHER MOD LOADER

DONT TRY TO PLAY A GAME WITH AN OLDER AlchemyCraft IN A NEWER VERSION!

DONT PLAY VANILLA SURVIVAL/WORLDS WITH THIS MOD WITHOUT BACKUPS, MIGHT GET CORRUPTED!

Hope you liked it, its meaning too much working, peace out!

Remember to Report Bugs/Human Errors to fix in the new release of AlchemyCraft.

We (me) are working on a new release buggyless and bountier, be patient

Oops! i updated the text without the new version! *facepalm*

All ready! Here we go!

The Removed Herobrine was just a joke xD like a "Too-Lated" April Fools, an April 24th Fools! xDDDDD

A new update will become soon, not today, we and my friend (XxXANONIMOUSXxX) were talking about the mod, and he gave me truly good ideas, i think the next release will be released the next week, obviously if there is not a problem :b