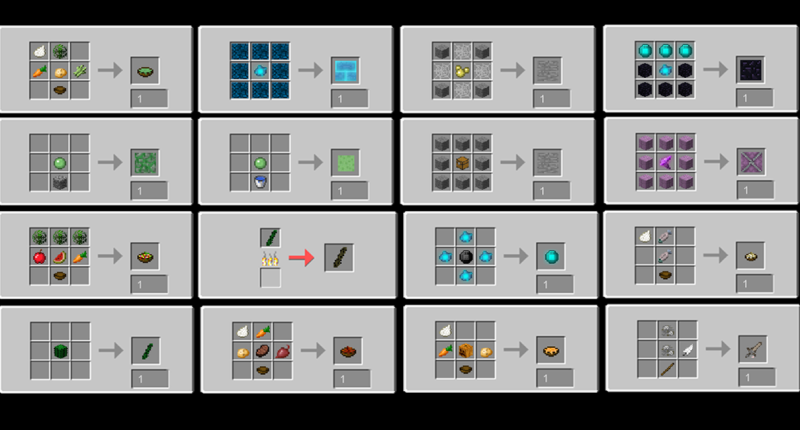 Just as a quick introduction. Me and my brother were playing through Vanilla Minecraft again from start to finish. It had been a while since either of us had played so it was a bit of nostalgia for a while, but we soon came to realize that even though all of this awesome endgame content had been added It still felt like the game was a bit top-heavy. What I mean by that is that most of the excitement comes from the Endgame such as Strongholds, End Cities, Bossfights, Nether Fortresses etc etc. So we found the mid-game a bit of a bore. Once we had discovered all of the biomes and several villages of different shapes and sizes in a few hours it all became about Grinding Enderpearls, or Grinding Wither Skulls or the merciless boring effort of mining quartz for XP.

What we realized was that even though Minecraft has an Awesome end-game and start point, exploring runs thin really really quickly. We went to look for some mods but they all pretty much drove too far from Minecraft's core. So I decided I would do it myself, and even come to you (the community) to see what you would like from it too.

Craft Horizons is pretty much as it sounds. I aim to add a LOT of features that make an impact in the places that matter. They offer alternatives to the current in-game grinds for something that is much more fun and adventurous. It expands the core of many of minecraft's under-worked features such as the food system. Making fishing more relevant and adding tonnes more structures to explore.

There is a lot of expansive content in this mod (And I mean A lot!) So I may aswell explain some thign category by category.

I decided to add extra tools to the game. But the issue standed that Diamond is just too accessible and a well rounded to add anything above or below it. So I decided to add an alternative route into attainaing some special endgame tools. Ancient tools are definitly the fastest mining and hardest hitting tools in the game. But they are uncraftable, and only found deep within the mines, and are rare. They are also very flimsy, so that Better-Than-Diamond feeling wears off very quickly, then more need to be found. Meaning diamond tools are still useful and valuable, but not redundant.

I wanted to make an impact on mining. It quickly gets very dull. This mod adds a huge range of fun ores that make alternatives to grinding Withers, Endermen and so on.

This was a biggy for me. The food system is really unabalnced in Minecraft, the best food is also the eaisest to find. Making fishing and farming basically redundant. These new special meals and recepes are the best food in the game. But they require an expert chef!

There are a lot of ghostly features in this game. And they build up to an alternative endgame location. There are just another fun thing to drive for while playing the game.

Great mod, What I like about this is your idea of adding more items, but keeping the new items from overpowering or making current items useless. Looks like you have done a good job at making the items works and the new foods. Looks like a well deserved Mod of the week.

This is the first MCreator mod in a long time that I've actually downloaded and played for myself. It's super fun and I intend to play through a world with it in survival. I really like the fact that you saw a lacking in mid-game content and added a ton of cool new stuff to fill that gap. I had a similar idea about a year and a half ago when I realized that after the end dragon was defeated, there was next to nothing left to accomplish, so I made a similar mod, Double Vanilla, to fix this problem. I think that if you were to update this mod, you could try to add some post end-game stuff in to really make this mod stand out (more than it already does). Super great job; I get really excited when I see a mod this good that somebody actually put effort into. Peace

Did you steal my Malachite MOD

Will you update this mod? :(

I always thought the logo of this mod was a screenshot (using barrier blocks), now I realized it actually is an edited image! The screenshot was cropped and added to the background of the dimension XD

It was MOTW (it isn't displayed because it is old)

So raolcraft 2 is also mod of the week and that’s why it is not displayed?