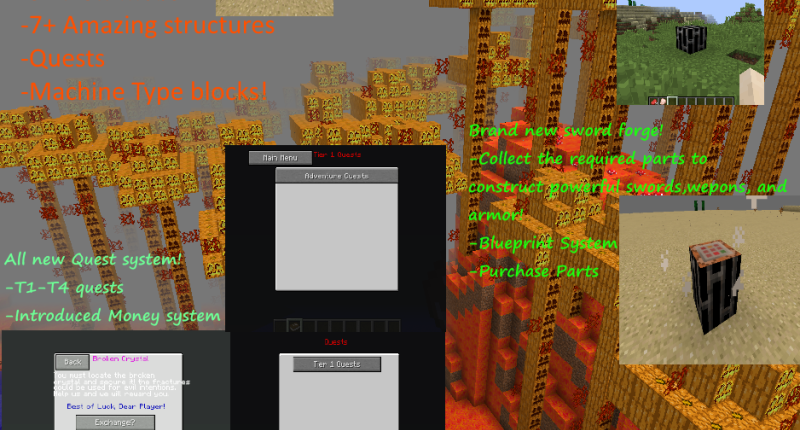 this mod will add many new items to the game for you to try out. its been about 2 years Since I have uploaded a mod due to

personel reasons, but here it goes!

Sadly, Due to MCreator acting strange and not allowing me to view or edit code, or remove "problematic mods" this mod will be discontinued. I tried to fix it, but a new problem arised, causing the console to not show any error and it just pops up saying theres a problem after 10 minutes. it also takes about 30-50min to compile. Please enjoy this mod, despite this.

I plan to create a new mod, maybe a little less complex? But, i will still implement alot of ideas from here and from my other mods. Thanks for helping me get Mod of the week.

Summary of the mod:

Now with the Rodent trap you can catch small rodents for loot and food! be careful as the trap may collapse and if you dont want to hurt the poor animal then use a special key to open

the cage and release the animal, will one of these animals become your best friend? You can now catch magical particles inside a special block, but it has to be raining! you can harvest the block for stardust and infuse them into weapons and armor for amaizng abilities! Finnaly you can try out the heater! being near this handy device will help you see in the dark and even warm you up!

These are just a few of the amazing machines and mods in this, download it to check out everything! Finally you now can now access QUESTS, complete them to earn rewards and Bronze,Silver or gold coins so you can visit the reward shop.

to do with holidays. I will try to update regulary and keep the mods reasonable (Sorry no OP weapons or armor)

I will try to fix any problems in the mod and will always strive to make it better. I love trying new things

and anything new that I add in, I will post below in the changelog with explantions if need be, I will also

test the mod before release and make any changes as needed. Thanks and enjoy!

Note: all types of items that can be found in Minecraft will have same recipe here, IE: sword is made with stick and 2 ingot types, so will mine, they will be made in same patter as well

-Halloween dimension is now made out of pumpkin grass which is found in the Hallow biome.

+25 New GUIS (all used for Quests, and reward pages)

-Fixed spawn of all mobs and AI's

This section will include much needed information on the mod and special ideas I have added in.

the azure staff upon attacking it has a 21% chance to inflict double the damage on top of the orignal 5 damage it does.

the Evil Pumpkin Head is dangerous!

The terror Mob spawners will spawn anywhere and will spawn evil pumpkin heads. destroy the spawner for surprise!

more secrets with the azure staff, look for them!

The axe of speed is great for harvesting, but be careful when attacking!

heater requires flint and steal to start, use water bicket to quench the fire

unfused block needs to be under rain for it become fused, use empty bucket to collect stardust from it

Rodent trap can collapse which means it resets, it has small chance to fall apart completely also.

PLEASE NOTE: ALL THESE USE 5-20 SECONDS TO TAKE EFFECT, The rodent trap may even take up to 30 seconds to catch something!

the Halloween Dimension now uses Pumpkin Grass to create and you need the spookie lighter.

The Quest system is a heavy work in progress. 1 quest can take up to 10-15 minutes to implement, the next update will of course have tweaks, but will focus heavily on Quest system and rewards.

The Sword forgery will also receive high prioity as it takes a while to set up 1 Forge blueprint.

(All future staffs will be created like this, with respective items to craft)

(Only this crossbow is created as is)

I have a huge update coming out soon. 35+ New mods, including tools, weapons, mobs, structures and machines!

I currently get an error everytime i try to upload a mod file so it may be a couple more days.

New update is out, Version 0.0.3! this mod introduces many new concepts and challenges! download now to check them out, and if your curious go ahead and read the summary on top for some of the cool feutrues.

Working on pushing out new update, this update will contain main, much needed fixes and new systems such as an in depth quests system and the begging of a new sword forging system to create powerful weapons. The quests will come in 4 tiers (only tier 1 in this update) with each tier offering better rewards. A new money system has been brought in so you can earn coins to spend in the rewards shop!

0.0.8 Update has been Published, Preview of the quest system can now be tried out.

If anyone has ideas for Quests or sword forge, please let me know. Also any bugs reported would be great help.

The Next Update I plan to add at least 30 New Reward types, and 25 New types of quests ranging from t1-t4. I will also be working on a new type of rodent trap that behaves differently than the current, Finnaly I will fullu implement the sword forge with at least 10-15 forge blueprints.

You still haven't lost your touch.

This is an original Mod to participate in the upcoming Universal feasts my account.

My excuses, he participate !