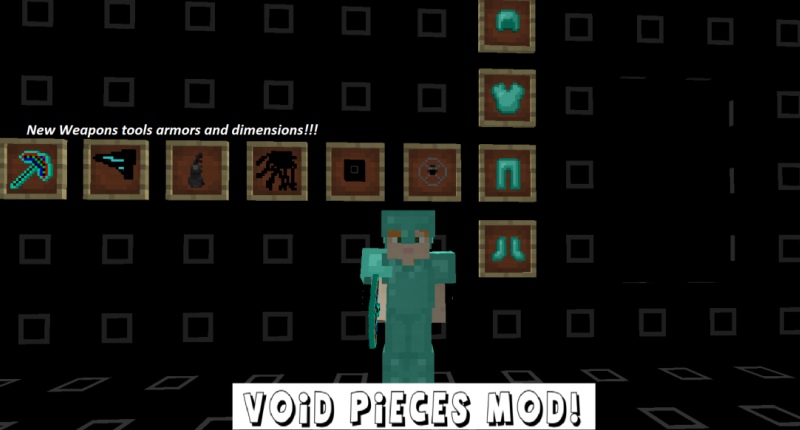 Welcome to the void peices mod! This mod adds alot of usefull yet hard to get items. This is meant to be an end game mod requiring netherstars for most of the crafting recipes. I'll add a recipe list if this mod gets enough support! Try it out it has alot of stuff you can explore with including a gun, pickaxe, dimension, and some crafting recipes that are meant for end game players.

The main resource you will be using is called "Void fragments". You can get these from void chunks which is the main ore in this mod. Void chunks spawn at 0-6 elevation in the world. Keep in mind only 1 spawn in each chunk so they are extremely hard to get and this is why it's an end of game mod.

The next resource is called "Nether infused void".

Here is the crafting recipe..

This is the ingot of the mod. You can use these as the main resource when it comes to building your items. You can make armor using this ingot if you put the ingot in the respective order.

The first item is the void pickaxe. The pickaxe is made like so->

This pickaxe is way stronger then a diamond pickaxe and can break almost any block instantly.

This gun uses void fragments as ammo and can shoot up to 6 hearts of damage. Upon contact with a mob or player it will inflict them with mining fatigue.

This armor has a 99% protection from damage. It is extremely difficult to gather the supplies to create Void armor. You create them by putting nether infused void in the respective crafting patterns.

This is the dimension of the mod. The dimension is called the void. Can you guess what spawns in it? Nothing! It's just void. There is a very low chance for it to spawn a plains biome of obsidian offering a extremely supple amount of obsidian if you have the void pickaxe to mine it all. To create the portal put Void chunks in a nether portal fashion and light it uses the void igniter which is made like so

You can make void chunks by putting 9 void fragments in your crafting table.