Hungrixx: ready to eat all who oppose it! 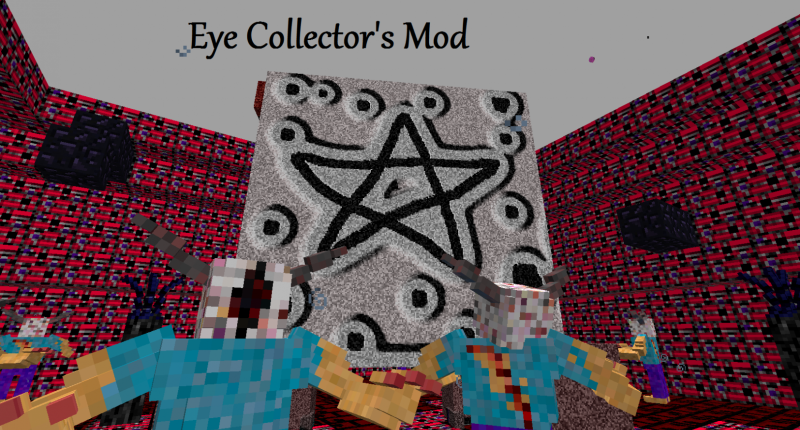 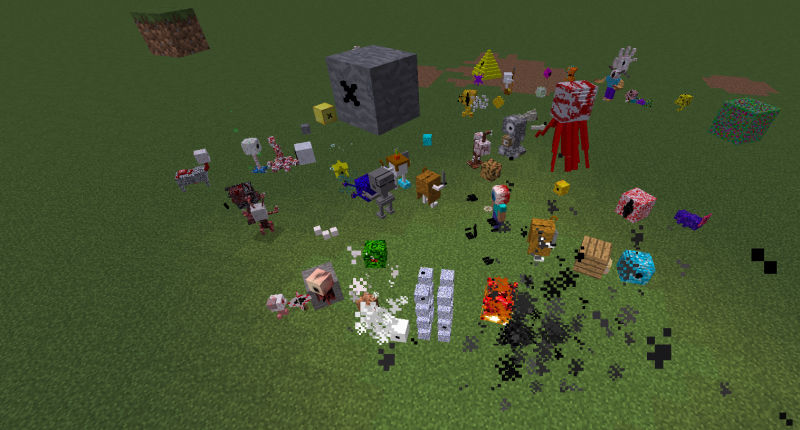 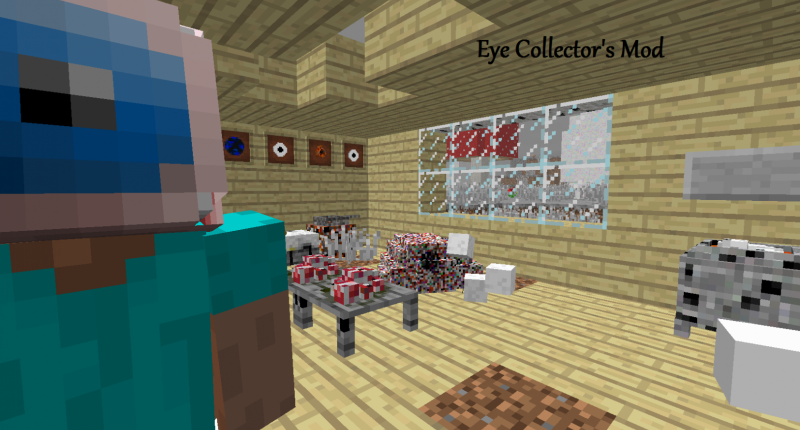 Due to size of the mod, you will have to download it from my Google Drive. Sorry for the inconvenience.

Do you want to start an eye collection of your very own? Of course you do. A mod filled with surprising and spooky eyes Is just what you need!

-Loads of blocks and items

Now tell me, can you collect the Eyes?

+Made crafting recipes to make use of Eyewood

+Added a rare [and deadly] rare drop for the Cookie Eye Spider.

~Removed spawning of Boomeyes as they are a WIP

+2 New Biomes for the Eye Dimension!

+The Eye Forest with new trees and a new rare eye mob!

+The Dark Eye Biome where Eye Terrors lurk around every corner!

+ Added Mutant Flesh Blocks and Ingots! [currently do nothing...]

+ Added a new mob: Rotting Eye! A passive mob that spawns only in the dark eye biome! However it has lost the ability to breed...

~ Changed the Eye Monster's Texture and added custom sounds for it, to make it seem more fitting!

+A rare Eye dungeon with loot and Eye terrors!

+A... art monument? with weird art and a interesting statue!

~Nerfed the rarity for the Gold Eye Mob and Rotting eye.

+The passive, yet freaky, Eye Abomination that drops new eye meat and loads of XP! Also it only spawns in the dark eye biome!

~Gave the art blocks custom models that allow you to hang them in Item Frames like Paintings!

+A collapsed building with loads of trash and new Eye Art!

+A weird Sponge Eye Castle with lots of loot and...

+A (expensive) block that processes trash into helpful loot.

+A Eye Animatronic which you can trade Iron Nuggets for Grilled Eyes!

+Made beautiful new sounds for many Eye Mobs!

+4 New and difficult mini bosses with great loot and interesting mechanics! [except for one that is passive]

+Kashulkin is powerful yet slow, defeat it and its babies!

+The Eye Tarantula is quick, and deadly, use your wits to kill it!

+Satatrixx, a atrocious fiend, uses the power of lightning to become an almost unstoppable force!

+Collossus, a gigantic passive boss with a thousand health!

+Cacteye can be melted to be made into ink or blocks!

+Eye polish made from eye tears and melted cacteye.

+Freaky Blue Eyes are creatures with a interesting way of communication!

+Invisible Eye Mobs that sneak up on you to attack! Also they screech like monkeys.

+3 new mobs for this biome:

+Lucky Braindead eye that drops quite a bit of gold!

+The Christmas house, a family ready for Christmas... to wake to an unpleasant surprise...

+An Eye Fungus plant that spreads through the air until it dies!

-Improved the loot on the Trash castle, and trash house.

-Remade the eye terror's model and texture to be much better, and fixed it's bugged death sound

+The Bloodshot Eye Biome that has a gory tone to it.

+Magic Eye that flys and teleports around and... sounds oddly fimilar...

+The Eye Beast, a sheep-like eye monster that drops wool!

+Jaw Eye that is horrible and terrifying. Can be found only in the Bloodshot Eye Biome.

+The Ikkquid which is a weird squid-like pile of bloodshot eyes.

+Mau'lukshin a very rare eye mob that constantly teleports! Can be found only in the Bloodshot Eye Biome.

+The Thanksgiving House with a eye-hungry family of eye humanoids!

~Fixed a lazyness-induced bug where you couldn't craft the Flint and Eye used to get to the dimension!

~Trash Eye Mobs are now hostile, so watch out!

~Redesigned the trash eye cane to be a very useful tool for clearing out trash!

+The Hollow Eye Mob that drops interesting food items and has echoing sounds!

+2 new mobs that come out of the Eggsack!

+Keshulklings that are very cute yet still hostile

+Fleshy eyes that sit in one spot waiting for Keshulkin to eat it...

+Gold Eye Terrors, A rare neutral mob with not much health. [WILL KILL YOU IN ONE HIT!]

+Hermit Eyes are passive eyes that love hanging around ruins!

+Ice Eye Mob that Chills out in the Cold Eye Biome!

+Cozy House with a fireplace and hermit eyes!

+The Overgrown House which has been completely dismantled!

+Eye Pot with eye boiling away! Includes a interesting treasure...

+Anniversary House with all kinds of stuff to see!

+Trash Island a island floating in the sky with trash eyes guarding loot!

+Gold Eye Island, a rare island in the sky with Gold Eye Thingys!

+The C'Illoth Raid home to one of the new mini bosses...

+The Trash Eye Assassin which stabs and strikes anyone who touches their trash!

+Eye Prophets whom can foretell a ancient prophesy about the land's past... (Also they are hostile and really don't like you...)

+Eye Ghosts which are very dangerous attackers that speed up when hit! Also... are they the ghost of an eye, or of a person?

+Eye Worms are very gluttonous for eyes to eat... they might want to eat you too!

+Eye Worm Queens are only found in the hives. They are much more powerful than normal Eye Worms!

+C'Illoth The Blessed who as a boatload of health. He can shoot stars at his enemies and heal himself!

+Conglomaristacrats which have a powerful bite and can vomit toxic barf when hit!

+Trinkets which give the player many buffs when in their inventory!

~Changed the way mini bosses spawn. Now they spawn more frequently and they no longer despawn!

+The Eye Pot will make you giggle with delight!

+Sunbaking Table allows you to sunbake eyes! Not as healthy, but it saves coal!

+Breading Table allows you to bread eyes which you can fry with the Eye Frier!

+Eye Wheat which can be used to make Eye Bread or Breading Flour! (Can be planted too!)

+New Mob! Veyerus which spreads and multiplys quickly, it's quite a pandemic!

~Now that this mod can be as big as I want it too, the Eye Jukebox is fixed!

+The New Mythic Eye, a bizzare eye that's healthier eating it raw than eating it cooked!

+The Mythic Eye comes with a Mob and Overworld Ore.

+Mythic Eye Mob that spawns in swarms an is a very tricky mob to kill!

+The Solitudinarian in his New Raid! When fighting him, be sure to listen for his dangerous gas attack!

+Added Hyper-realistic Eye that's made up of the eye spectrum and two emeralds, quite a powerful eye to eat!

+Added a Alter to C'shan! A block where you can make sacrifices to C'shan and he can slowly fix your tools! Don't displease him...

~Flint and Eye can now be used to upgrade the Multipleye Blocks, a much less tedious way to get to the Eye Dimension!

~Buffed C'Illoth's Raid, you can find the Alter to C'shan inside! Be ready for more Eyes!

+Boom Eye Items which are a explosive snack!

+Magic Eye Items which make you uncontrollably levitate! When grilled can give you a random potion effect!

+Red Hot Eyes which are already cooked! Can be used as fuel or to make Hyper-Realistic eyes!

+Mysterious Stairs standing or floating in the middle of nowhere! [A very subtle reference to the Search and Rescue Creepypasta]

+New Satatrixx Raid! Can you uncover the secrets of Satatrixx?

+They don't want you to know about the Dispose Site Structure...

+Boom Eye Mobs which fly away and drop bombs during combat!

+C'shede'Arken, a flying mob surveying the landscapes and skies!

+Terxixx'xeter which hovers around. They love slamming into you!

+The Converted... are powerful mobs in the satatrixx raid!

+They don't want you to know about the Failed Conversion.

+Hollulixer a very scary mob that can grab and attack you, so don't get too close!

+Kerrip'Chede is a... unique mob that can attack you through the wall!

+Loads of Things and Improvements!

~Satatrixx no longer spawns in the wild.

+A Start Island, Only one of these islands spawns for you to explore!

+Halloween House with cheap decorations and another trapped family.

+Satellite Array which is interesting... and also a good place to find iron!

+New Mini-boss, Hungrixx, who isn't damaged by anything?! How do you kill it!?

+The Second Anniversary House Structure with new blocks and mobs inside!

+The Crazy Eye Car is a cluster of eyes morphed into a car-like monstrosity! It mostly speaks for itself...

+Ceilinlgolix'Hangrashal is based on a... childhood fear of mine...

+Morphalix'Fhuter wants to replace you! It will take your shape and copy what you're holding, then it will kill you!

“You feel an evil presence watching you”

This is going to be a terrible night...

Why do I hear boss music?

Praise to C'shan, the God of the Eye Dimension! May all of his enemies perish!

*Place on them all WIRES*
bye
*trun the lever*

This mod is so unique and I love it! I look forward to future updates! :)

This mod is getting scarier XD

2: has this been updated to the latest version of forge?