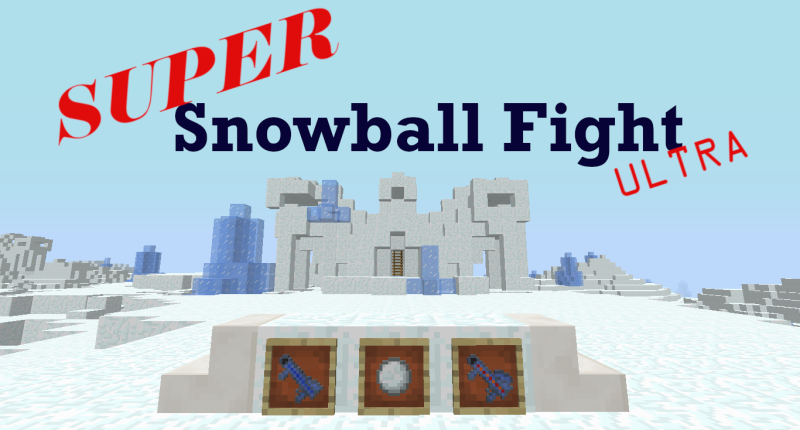 Come one, come all, to the magical land of Super Snowball Fight Ultra, created by the creator of Mod of the Week 2016 The Four Elements, along with The Slingshot Parable!

This mod will cover all your wintry combat needs, but is still in early development. Eventually, there will be an entire snowball combat dimension with different biomes holding different types of arenas, but for now, I'm focusing on getting the early snowball madness ~fun~ rolled out!

Currently in the mod:

Snow Battlefield - A cold landscape inhabited only by the thick-coated. Polar bears, wolves, and rabbits make their home here. In the wastelands you can still find the remnants of legendary snow forts left over by a forgotten civilization. You can also find all kinds of icicles and snow bunkers to hide behind, just in case you want to have a snowball battle with your friends!

Snowball Gun - Your run-of-the-mill snowball gun. Nothing too fancy. Fires with little damage and little knockback. Uses snowballs as ammunition.

Matter-Conserving Snowball Gun - A snowball gun with a twist - it has a 50% chance to conserve the snowball you just fired while still firing the projectile! It has a little more damage and knockback than the original snowball gun, but nothing incredible. The crafting recipe is shapeless, do it in any order you want.

Iceball Gun - A more powerful firing mechanism for the heavy iceballs. You don't want to be hit with the projectile coming out of these!

Yellow Snowball Gun - Ever wanted to make your friends poisoned for 5 seconds and nauseous for 12 by hitting them with a snowball? Well now you can!

Iceball - The condensed snowball that hurts so much to be hit with in a snowball fight!

Yellow Snowball - Eww! They say never to eat the yellow snow, but no one said anything about shooting it from a snowball gun!

Winter Armor - Suit up in a woolly suit that keeps you warm and cozy. (In the crafting recipe, the wool can be any combination of any colors.)

Yellow Snow Block - They also never said anything about making your house out of yellow snow.

For now, that's all, but I hope you all anticipate the next update!

Thanks for your interest in the mod, and I hope you enjoy.

What does that mean lol

You're back! :D
And your mods are always cool :)

Yeah, I'm back! Hopefully more active too. And thanks!

good job you earned a sticker :>

Why thank you, I accept this sticker with pride