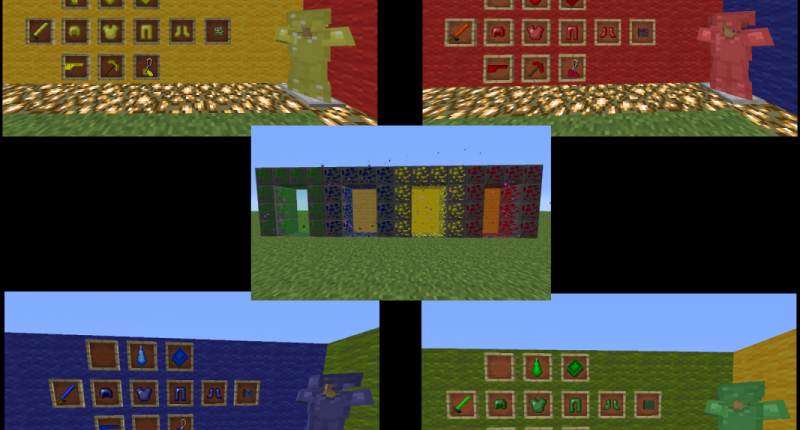 With 4 armor sets available to craft along with 4 dimensions to explore and 9+ tiered soldier ranks to battle through. A new reason to go out and explore your Minecraft world. 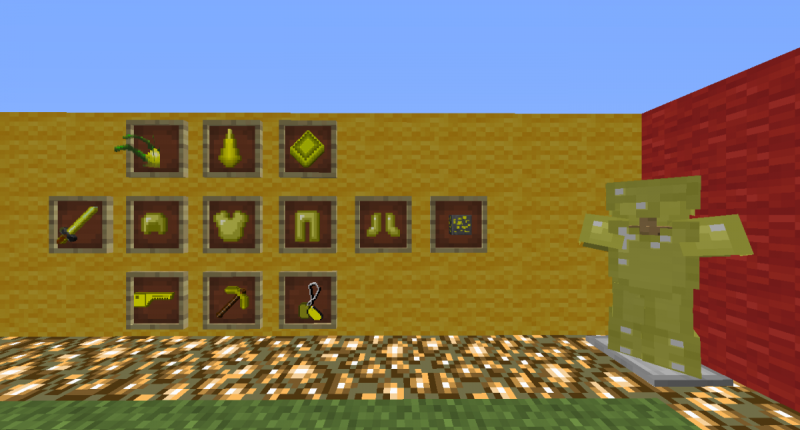 Yellow being the weakest of the four and easiest ether to aquire. 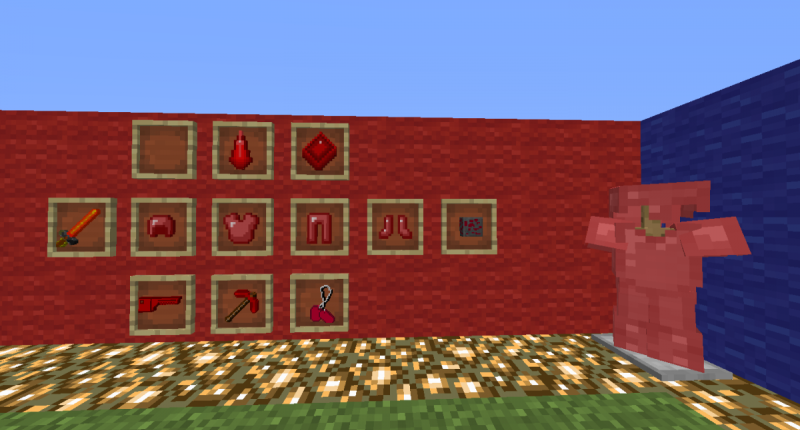 Red is stronger than yellow. ( Any one of the armor four pieces gives Fire resistance, Great for Nether exploration.) 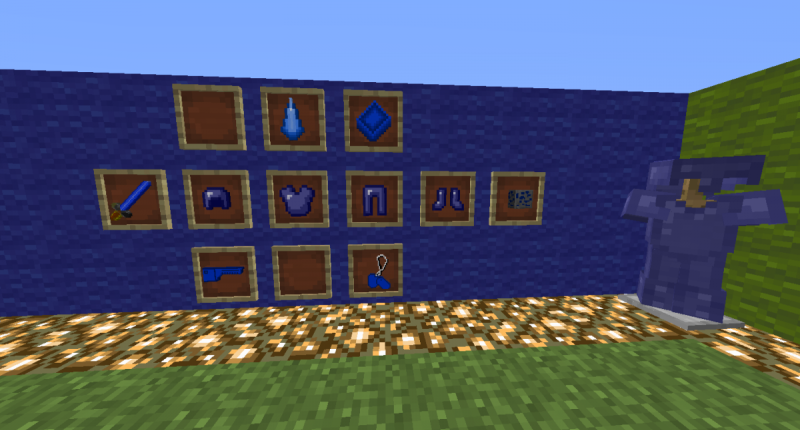 Blue is stronger than red ( Any one of the four armor peices gives Water breathing, great for exploring a water monument)

*** If you get stuck or have a question on the mod or if you see a bug just comment below as I do check frequently. As for recipes using a JEI or something similar will help a great deal. Creating a WIKI when the program is changing would be counter productive and when I have time I'll tackle that in the future***

I would like to point out here before we go any further that this mod may add the usual items, however the whole Idea of the mod is that it's an adventure. You'll be traveling the land looking for yellow, Red and Blue Ether plants and soldiers to collect ether to craft weapons, tools and armor. (NEW) Wacking grass has a chance to drop Yellow, Red and Blue ether nuggets that can be combined in the crafting table to get the regular ether. This will help you gather enough ether to craft your first pick-axe to be able to mine the ores in the Over-world.

The mod is set up in a way that in order to reach the green Dimension you will be required to get through the yellow, red then blue dimension .In the yellow dimension you will have soldiers that will drop red tags and red ether. That will give you the materials to open a red dimension portal. When there you'll find soldiers that drop blue ether and again you'll have the opportunity to build a blue ether portal.

To make things a bit easier at the beginning, breaking regular grass has a chance of dropping y/r/b nuggets or you can break some of the ether plants and battle the scourge to gain better ether rewards to build your first red or blue ether pick to have access to mining the ether you find around the world.

Just think of all the new worlds you can build in and battles you'll engage in. You can save up the ether to craft special armor that will give you additional skills like Fire resistance or if you wanted to clear out a newly discovered Ocean monument the blue armor grants you water breathing. The options are endless.

Just don't expect to have it easy. The low ranked mobs such as the Re-con scouts are fairly easy to kill and they are in every dimension, but as you go to the other 4 dimension the game starts to get more challenging and I'm sure thats what people are looking for. New Ideas are always welcome just comment below.

The portals are made with an Iron block and 8 dog tags that drop from the scourge and soldiers. 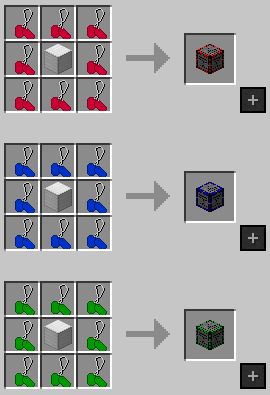 Yellow, Red and Blue Ether plants generate in the Over-world.  Be careful though, as some of them have the scourge inside as once they are out they attack. Scouts also patrol around the plants at night as well. Being caught in the rain can be dangerous, as the rain has a boosting affect on the ether plants and if you're caught outside the could swarm you. The worse part of the scourge is how they cut down on the durability of your armor very quickly, you'll notice that after a few quick battles and need to craft another armor component.

I decided to have the ores placed in the Over-world however mining them will require you to craft the pick of that harvest level. Crafting recipes are straight forward and easy. Again by breaking the regular grass will drop Y/R/B nuggets that can be combined to start you off with the materials required to build your first pick-Axe. If you can handle some battles breaking the ether plants yield more ether but more dangerous.

Ballast ore being the newest ore found in the Over-world requires a diamond pick-axe or Red ether Pick-axe to mine and will be required to craft enchanted books.

The scourge also drops gray dog tags with yellow ether, that can be crafted along with 8 yellow ether's to form a Yellow dog tag Identical to the soldiers tags.

Guards are not very loyal and tend to wander off and disappear. So I basically use them to get out of tough spots. Just try not to hit them as they do carry a great deal of HP and they do some heavy damage. I guess I should change their names to Mercenaries.

The Spiders are my favorite, They are fast and skiddish they attack quick and run if hit, but always leave nasty scourge in their wake to fight they're battles. Also unlike the scourge they do have a great deal of HP so most of the times chasing them is fruitless and waiting for them to regain some courage to attack again will get them closer to you so you can kill it.

I am presently playing this mod myself and tweaking it as I go, adding things I think are needed to help or make it more fun to play. Trying to make it in a way where anyone who plays the mod finds it challenging. I think that makes it more compelling to play.

NOTE: Open portals 3 chunk distance from each other and make sure portals are in your starting world. I find if you don't  the co-ordinates get screwed up, like spawning inside blocks.

If You would like to contribute to the mod with a structure that I can place in one or four of the dimensions I'll need them in Schematic form 1600 blocks per volume (10 x 10 x 16  as an example) is the limit that Mcreator will accept. I will give credit and link to your mods.

Thank you for your interest

April 1 - Rebalanced the the armors to reflect normal values.

Yellow - Desert, Beaches and so on Mostly Dry hot

- Added the possibility of the scourge to spawn from ether gravel

- Lowered the attack strength of the soldiers as they were a bit too Over Powered.

April 18 - Working on adding sentry's - Decided to go with a spider as the whole floating head did not turn out the way I thought it would.

April 21- Added an Electric Trap- (Reconsidering on keeping this)

May 4 - Added a new Ore Ballast that as of now can be used in crafting enchantments for Books that can be used in an anvil later to apply on  Items. There are two ways to obtain the ore, 1) Mine it when found 2) Combine 9 ores 3Yellow 3Red 3Blue to gain 1 Ballast. The generation of the ballast ore is similar to the Green ether

May 6 - Added a recycling program where if your armor is close to breaking you can place it in the furnace to retrieve 1 ingot of the material that the armor was created with.

May 7 - Increased the armor values

May 12 - Added the Blue Ether Spider.

May 16 - Adjusted spawning of spiders from Soldiers and reduced natural spawning in world. More like added the Red and Blue spider spawn chances on soldiers.

May 16 - Added attacking instructions for the new Scourge and spiders to Guards so they can recognize them and attack them.

May 17 - Replaced the textures for the Plants that generate in the Over world to be more visible.

Thank you. much appreciated. I will be uploading the updated mod with new AI settings and added some more rewards for the tougher mobs in the other dimensions. After this comment
Thought I'd FYI that now in case you just downloaded it.

I have Uploaded an update, Increased the rate at which the dog tags drop for the weaker soldiers as in Yellow and red.
Also some other things you can read up in the change log

https://i.imgur.com/60Ksusz.png
Almost have my yellow Ether Portal done and soon starting my base in the new yellow dimension, can't wait

Updated April 7 - Added 1 additional scout and a Silverfish that pops out after destroying a plant that drops gray tags that can be combined with yellow ether to craft a new Yellow tag. Identical to the normal dog tags that drop from soldiers

https://i.imgur.com/aNpkgwC.png Setup base in Camp yellow.lol Letting my dragon do all the killing around the base. haha

Thank you, I just updated it now with new skins for the soldiers and a few other tweaks. Might want to download it again. Mostly aesthetics nothing dramatic where items or blocks were removed.

btw Congratz on the numerous amount of mods you have had hit Mod of the week. Nice work and alot of work too. I read your profile I'm Italian as well but I don't speak it or write it as good as you are with English. haha

I'm changing a few things guys, I removed the spawn nuggets from the picks and added them to the reg grass drops as a seed but only yellow, red and blue. However I found that if you use a pick while mowing grass down you can cheat and get free ether. So that had to be corrected. However I have some other Ideas and next update will be fun.

If you like Night of the dead April 29th upload is your cup of tea. In other words I reduced the amount of spawning of the Scourge entities by 50% when it rains as It seemed to me a bit excessive. So May 1st upload is only different due to that. Enjoy and thanks

Thank you, I'll be uploading a new update to the mod with an additional ore for enchanting books and a great deal of new recipes. Possibly in a day or two depending on the amount of time it takes to adjust a few things. but yea this next ones a big one.

Came across a small snag, I tried to set up a new ore to generate in the Nether ONLY but as usual things don't work out as I expected so I'll have to set it up as something that will be needed to craft by adding the 3 ores together to produce the ore. I'm not sure if it's a MCreator bug or not but It does seem like it. So after I set this up I'll upload the new update.
Thanks

Oh BTW You might want to stay out of the rain. ;)