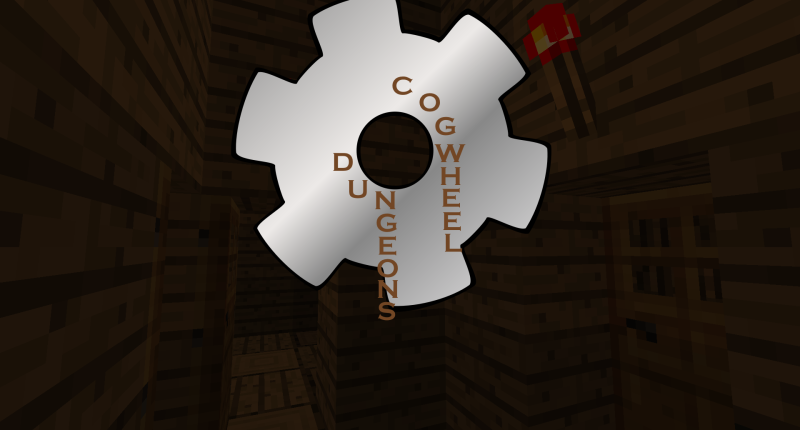 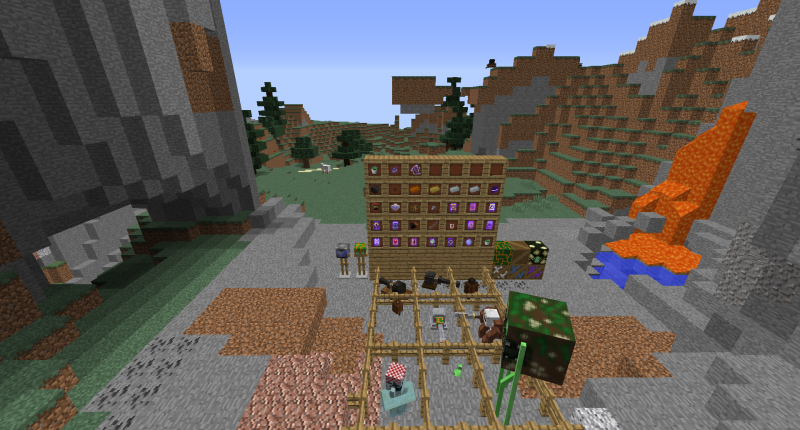 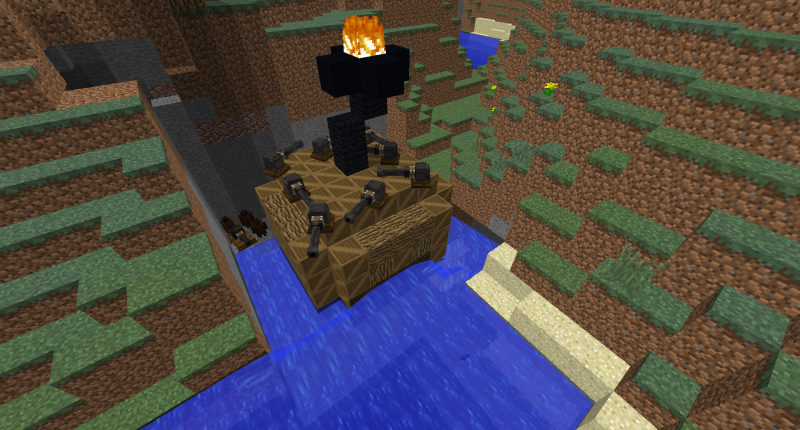 One of the 14 new dungeons 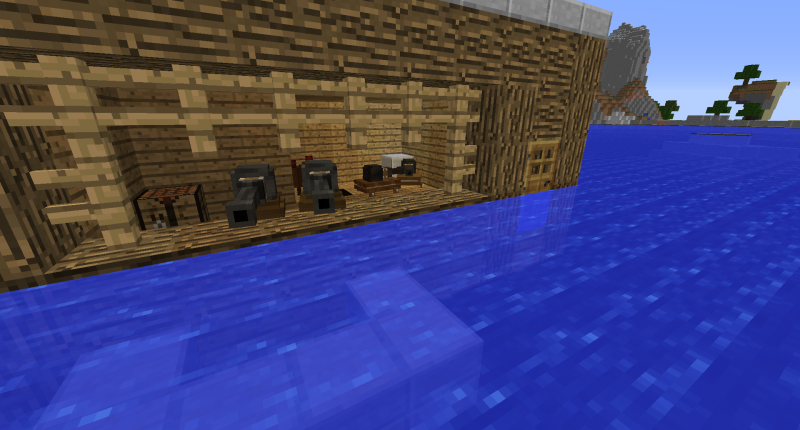 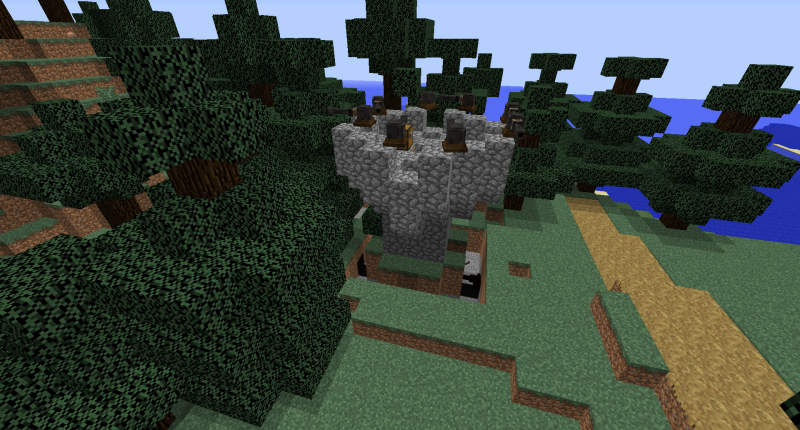 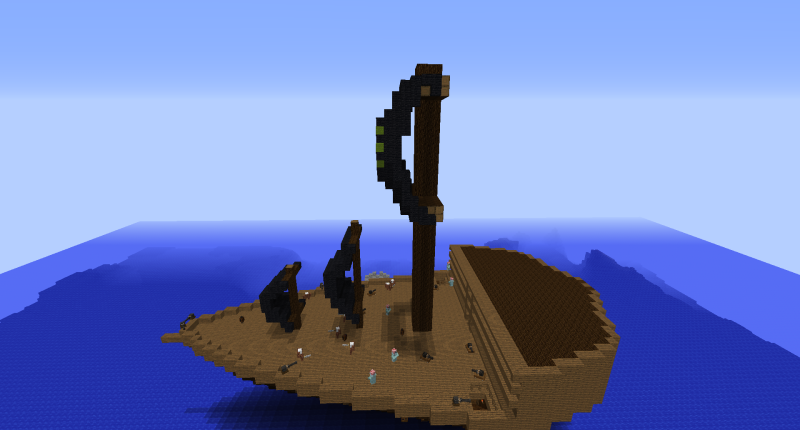 I want to hear your feedback on this mod!

Find a forum about it here! Any ideas for future updates would be helpful :)

This mod adds many new dungeons, based on technological themes.

*PLEASE USE JEI FOR RECIPES

Note: These mobs do not occur naturally, only in Dungeons. However, they can spawn rarely as part of the world generation, but will not spawn again.

Note: This mob was inspired by the troop of the same name in Clash Royale and Clash of Clans.

This is a moving mob that attacks the player at range. It is a dangerous enemy, dealing high damage.

It spawns a cannon on death.

This mob cannot move, and does a relatively large amount of ranged damage.

A mob that has high health and medium damage. It uses melee attacks.

A hostile mob that is very dangerous. It does medium damage, runs very quickly and explodes on death. Sometimes they may explode shortly after spawning.

A very powerful, but slow mob that wields a cutlass. It does extremely high damage, and has high HP. Stay away from it.

Note: The Ghost Pirate Illager was suggested by RaolTheBest. It is also the only mob in the mod that can spawn naturally.

A relatively powerful mob that looks like a ghostly villager. It can spawn naturally.

A ranged mob that cannot move, and does very high damage. It has a large amount of HP.

Note: I did a mob tournament using the Epic Siege mod, including some other mods such as Thaumcraft, MoCreatures and Raolcraft. This boss came out top, closely beating the Giant Taintacle boss from Thaumcraft. That just goes to show how powerful it is.

A melee mob that deals very high damage. When attacked, it leaves behind Nightmare Slime, which deals damage, and spawns Nightmare Slimelings, which will attack you. It has a high amount of HP.

Spawns in the Ghostly Galleon.

A block that, on being destroyed, determines a rarity of its loot. This will be apparent through the colour of the crack that appears in it after breaking it, and through a message sent to chat. White is Common, Blue is Rare, and Purple is Epic. It is only found in dungeons.

I'll leave it to you to find out what items randomly generated loot can be.

A block that is an essential crafting material in Augments and the Thinking Helmet. It also acts as a redstone insulator: Redstone cannot flow through it. It is craftable.

These blocks are used in Dungeons to spawn mobs.

Found in the Ghostly Galleon. Not saying what's inside it. It's a surprise :)

A fluid spawned by Davy Jones' Chest when it takes damage. It gives Wither, Nausea and Slowness when touched.

Note: The only weapons currently in the mod are ranged.

A high-damage ranged weapon that sets enemies on fire. It uses cannonballs for ammo. It can be found in crates.

A medium-damage gun that has good range. It uses musket balls for ammo. It can be found in crates.

Note: There are no armour sets, only helmets.

A craftable helmet that grants buffs whilst worn. It also has high defence.

A helmet that has very low defence, but can be combined with Augments to give bonuses. It can be crafted.

Note: Augments are items that can be combined with a Neo Augmentation Helmet on a crafting table to give bonuses when the helmet is worn. They can all be crafted. TO remove one from the helmet, simply put the helmet with the Augment in a crafting table. The Augment will be removed, but you won't get it back.

A powerful Augment that stops you from taking damage below a power of 5 when you have an armour level below 5.

An Augment that gives you fire resistance and sets you on fire (because it's awesome).

An Augment that makes you completely immune to all status effects.

An Augment that grants a large amount of non-combat bonuses.

An Augment that lets you press V to create an explosion that you will survive.

An Augment that lets you press V to switch dimensions between the End and Overworld. THIS CAN GET YOU LOST, SO KEEP THE COORDINATES OF YOUR HOME AT ALL TIMES.

An Augments that allows you to fly.

An Augment that increases your damage when using a sword.

An Augment that increases your damage when using an axe.

An Augment that increases your mining speed.

An Augment that allows you to press V to heal for 1 Nightmare Goo.

A drink that gives some hunger points, removes all status effects and gives regeneration. It can be found in crates.

Note: Caches are items that give you items when right clicked. These will drop from all bosses. There is currently only 1.

Dropped by the Experimental Cannon. Right click to get items from it.

Dropped by Davy Jones' Chest. Right-click to get items from it.

An ingot used for some crafting recipes, including Circuit Boards and some Augments. It can be found in crates.

An ingot used in crafting some Augments. It can be found in crates.

An ingot used in crating some Augments. It can be found in crates.

An ingot used in crafting some Augments. It can be found in crates.

A crafting material used in crafting some Augments. It can be found in crates.

Ammo for the Hand Cannon. It can be found in crates, crafted or dropped by some enemies.

Ammo for the Musket. It can be found in crates or crafted from a cannonball.

Not normally attainable without cheats or JEI. Used simply as a texture for the Experimental Cannon to shoot.

A crafting material dropped by the Experimental Cannon's Cache. Used to craft some Augments.

A crafting material dropped by Nightmare Slimelings. It is used for some Augments, and as fuel for the Nightmare Healing Augment.

Removed in 1.1.2. That update was originally going to fix it being impossible to craft. However, on testing, it was discovered to be overpowered, by making you have huge regeneration by reaching full hunger, and almost making you invincible. So it was removed.

Removed in 1.2.1. An Augment that allowed you to press V to spawn Cursed Slime, which dealt damage to entities not wearing the Neo Augmentation Helmet for this Augment. It was removed because it crashed the game when it dealt damage.

Removed in 1.2.1. A fluid spawned by use of the Cursed Protection Augment. It dealt damage to entities not wearing a Neo Augmentation Helmet equipped with that Augment. It was removed because it crashed the game when it dealt damage.

Note: The word in square brackets [ ] is the dungeon's ID.

Note: Tiers are defined by loot and enemies. Tier 1 has only chests as loot, and has Cannon, Cannon Cart and Barrel Bot as enemies.

An underground dungeon consisting of several rooms. It is very common, and has 2 chests hidden behind walls.

A surface dungeon that looks similar to a village blacksmith house. It has 2 rooms and 1 chest. It is quite common.

A surface dungeon that has 1 chest and several cannons at the top. It is a castle-like tower of cobblestone. It is quite common.

A tiny surface dungeon with few enemies and one chest. It consists of a few spruce pillars and a double stone slab. It is very common.

Note: Tier 2 has crates, and sometimes chests. It has Cannon, Cannon Cart, Barrel Bot and Powder Kegbot as enemies.

This dungeon is a small 3x3x3 cube of oak wood planks underground, with a crate in the middle. It is quite common.

A small half-built house of clay on the surface with some crates and a chest.

A small pile of crates on the surface with few enemies. It is quite common.

A reasonably large pyramid of crates on the surface, with a high amount of enemies. It is fairly rare.

A small 3x3x3 cube of obsidian underground with a crate in the middle that has a 100% chance of being an Epic Item. It is very rare.

A large bomb-like structure made of wood and crates. It has a lot of enemies, and the inside is filled with Powder Kegbots.

A huge cube of crates on the surface. It is surrounded by enemies.

A 3x3x3 cube of cobblestone underground with a crate in the centre that has a 100% chance of being rare. It is quite rare.

A wooden room on the surface with a high amount of enemies, a pile of crates and a pile of hay with a coal block hidden in it. It is fairly uncommon.

Note: Biome Dungeons are dungeons that only spawn in specific biomes. They are similar to Tier 2 dungeons but can also have Buccaneer Bot as an enemy.

A large tree with a chest on top. It generates on beaches, and in deserts.

A small hut with some crates and a chest. It generates on beaches.

A tiny boat made of jungle wood with some crates and a chest. It generates in Oceans.

A small room made of sandstone with a chest and some crates. It generates in deserts and mesas.

A small post with some crates. It has arrows of weakness in item frames.

A cut-down spruce tree next to a campfire. It has a chest and some crates. It generates in taigas and extreme hills.

A small room made of red mushroom blocks with a chest and some crates. It generates in Mushroom Islands.

A small hut made of jungle wood, leaves and hay bales. It has a chest and some crates. It generates in Jungles.

A small wooden ship covered in slime. It has a chest and some crates. It generates in Oceans. As well as the usual enemies, this dungeon can have the Ghost Pirate Illager.

Note: A boss dungeon is defined as a dungeon containing high-level loot and a boss with a health bar.

A large concrete structure with several layers, a huge amount of crates and a chest at the top. The Experimental Cannon is on the roof.

EMTF stands for Experimental Mechanical Testing Facility. It is quite uncommon.

A HUGE dungeon (I had to invent Nester Blocks just to get it to work, it took me about 8 hours) with a deck, hull and cabin. The hull has several large rooms. It is made of Spruce and Dark Oak planks. Davy Jones' Chest is inside it, but is sleeping. Therefore you will not see the health bar. If you really want to, though, you can wake it up if you find it. The loot is worth the difficult battle.

A note on downloading:

Please download the file with '[LATEST VERSION]' next its name. The others are just legacy versions, and are deleted when the file limit is reached. They only exist in case you want to try something from an older version. If you want to try a version no longer on the downloads page, I can provide a link.

-It took a lot to get this mod out here, and rest assured it will be updated constantly.

Patch V1.0.1a released! Barrel Bot is now completely hostile. The watermark has been removed, Giant Keg is now rarer, and Experimental Shield has been nerfed.

Change description of some advancements

Help... I'm running out of ideas! Please go here to post your ideas and help me out! https://mcreator.net/forum/47075/cogwheel-dungeons-forum-discussion

This is a pretty good mod! :D

Very nice mod page. I just suggest you to polish the mod picture a bit ;)

I have changed the logo, it looks better now. :)

Cool mod and description :D
I think it will win MOTW
PS: is the cannon cart inspired on Clash Royale/Clash of Clans?

It is! I had actually made the techne model a while before working on the mod, and I started working on this and decided it would fit. :)

You were right about MOTW :)

This is awesome. Can't wait to add it to my mods list. :)