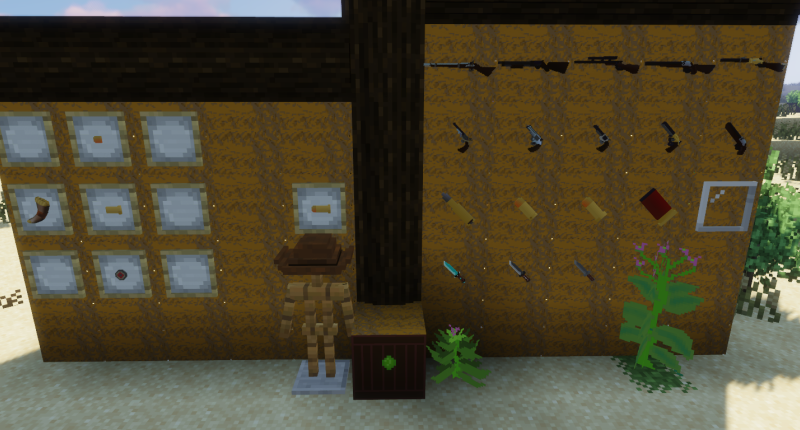 All of the main mod contents, in one picture.

a locked casket found in outlawcamps, it needs to be unlocked with the key dropped rarely from outlaws and a bountyletter

Blast away with some wild west revolvers and rifles, or sell some tobacco for emeralds.

All weapons have an overlay showing the ammunition in the top left corner.

Reload one bullet at a time with R, and Unload all bulltes save with Y.

To avoid breaking your gun you have to clean or oil them on aregular basis.

to do so take the hopefully empty Gun (Y) in your off-hand and the cleaning rag or oilbottle ine main-hand.

Ammo is crafted in 4 parts. Bulletheads, casings, primer and powder stored in an animal horn.

Oil is gained by crafting flowers and empty bottles. Its use is extendet by soaking wool with oil.

You get a nice hat.

Killing Villagers and innocent players will raise your Bounty until you get the Bounty potion effect.

If you get close to a Villager with the Bountyeffect active there is a good chance a Bountyhunter will spawn close by to get your Head.

Killing Outlaws and Players with Bounty effect will lower your Bounty score.

Outlaws drop ammoboxes and rarely bountyletters, wich you can redeem at the selling crate by right clicking the box wit the Letter in Hand.

They also rarely drop keys for the caskets in their camps, wich contain their stolen goods, and sometimes bountyletters.

For cosmetic Modification of your Rifle use the gunsmithing table, the Rifle goes in the Bottom Slot the Item in the top.

tobacco has no use other than selling for now.

the selling crate and further its texture are temporally.

the ammo overlay can dislocate depending on resolution and gui-scale. smaller scale or bigger resolution move it toward screen center and vice versa.

Older versions can be found at curseforge. (Wild West Guns)

2.18: Limited Outlaw spawning to night time, in previous version (2.17) they will overrun you at during the day

2.19: Limited Outlaw spawning to their camps.

Added cosmetic modifikations for most rifles.

Added modification Items to the loot list in caskets.

Changed some recipes and other small things.

Dang, I made my mod just because I didn't see any good 'wild west-era' weapon mod, and now I see yours :D looks amazing! Will it be port for 1.16.4?

on curseforge are several updates that are not yet uploaded here for 1.16.4/5

Easy MOTV, those textures and 3D models are so gooood!

how did you make shotgun shoot multiple projectiles ?