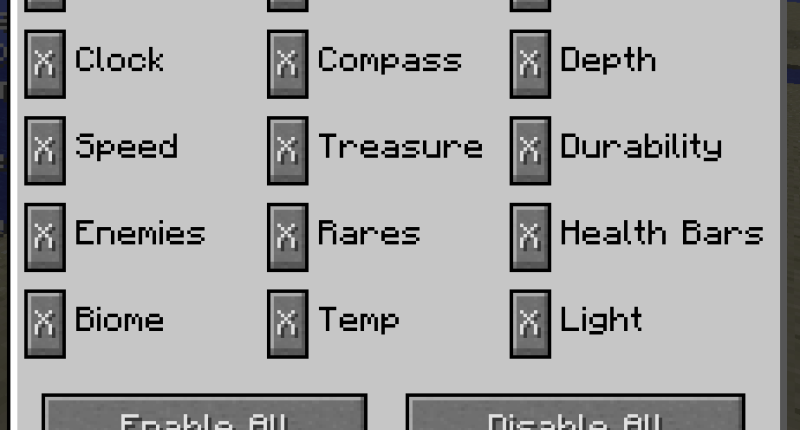 With the PDA, you can control what information shows up on your screen. 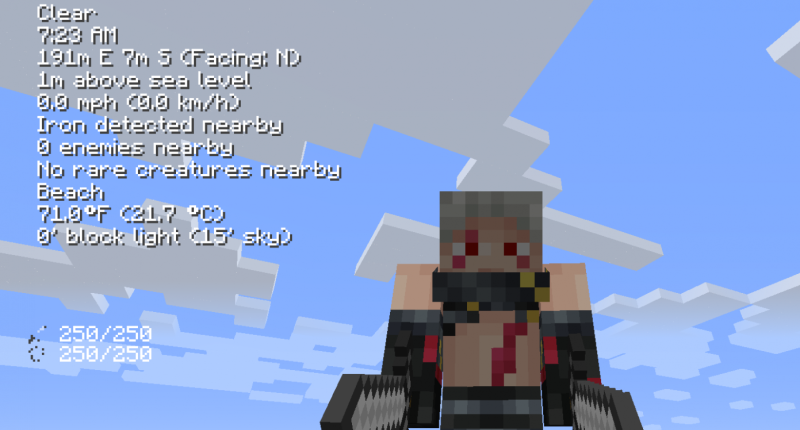 From the Creator of BMod:

Have you ever wanted JUST the informational accessories from this mod so that the content can be separated? Introducing BTech: Information Optimized!

If you like the Cell Phone from Terraria, this is right up your alley. Practically a Minecraft equivalent, this mod is!

Changes from the last version:

Now, for the contents!

Primary level information accessories:
What does primary level mean? These items serve one function at most.

The Calendar displays the current day and, if the world is old enough, displays year, too!

The Sextant displays the current moon phase. Never miss another bountiful night of slime slaughter in the swamps.

The Weather Radio displays the weather on the surface. Catch every opportunity to catch fish at increased speeds during rainstorms, and know when to stay inside for thunderstorms!

The vanilla Clock and Compass have extra features:

The Depth Gauge displays your current depth. It adjusts based on the dimension's sea level. In the End, it is useful for knowing when you are treading into dangerous territory!

The Stopwatch displays your current speed. Optimize your travel times by keeping this number as high as possible!

The Metal Detector displays nearby treasures, even through walls! Ever had the crawling fear of a vein of Diamond Ore right on the other side of a wall without your knowledge? This will tell you if any treasure tries to pull a sneaky move on you!

The Appraiser displays the durability values of your equipment on screen! Now you don't have to open your inventory and make yourself vulnerable to know when to retreat from battle!

The Radar displays the count of hostile creatures within hearing range, which is usually aggression range. This can be the difference between a Creeper getting a sneak up on you and not!

The Rare Creature Analyzer displays the name of the rarest nearby mob! Results determined by dimension. This can be used to locate Zombie Villagers, Endermen, Shulkers, and other rare creatures in their natural habitats.

The Life Sensor displays the health counts of mobs above their heads. Useful for knowing exactly how much damage you've done or knowing how much health an enemy has left!

The Biome Analyzer tells you the name of the biome you're currently in. That's about it. Works with other mods, too!

The Thermometer tells you the current temperature in your immediate vicinity. Useful if you're farming ice or looking for a suitable place to plant crops.

The Spider Amulet detects the light levels in your current position. Useful for knowing if an area is mob-spawnable.

The Magnet attracts nearby items to you if your inventory is not full. Never miss picking up items again!

The Forecaster has the combined effects of the Calendar, Sextant, and Weather Radio.

The GPS has the combined effects of the Clock, Compass, and Depth Gauge.

The Efficator has the combined effects of the Stopwatch, Metal Detector, and Appraiser.

The Hunter Tech has the combined effects of the Radar, Rare Creature Analyzer, and Life Sensor.

The Geo Scanner has the combined effects of the Biome Analyzer, Thermometer, and Spider Amulet.

And finally, the PDA!
The ultimate combination of every secondary level information accessory!

The PDA has the effects of all of it's ingredients. Right-clicking it will also open a menu to configure the information you see.
After all, the amount of information on screen can become overwhelming to some people.

-Changed the Stopwatch speed calculation equation to handle vertical movement of entities better.
-Changed the Appraiser so that it accurately displays the number of uses a tool has left. (Tools break at 0 instead of at -1)

This is a really good mod, i like the textures, but i think calendar may be a little useless because theres a day counter in the f3 menu. Really cool and useful mod

This mod is intended to kinda add the F3 menu to Survival in a more immersive way, if you think about it.
Lots of the tool functions are covered by the F3 menu, but if you are playing with the gamerule reducedDebugInfo, these tools are the only way to get this information! I think it's better for this reason.

Tell us which of these tools is your favorite!