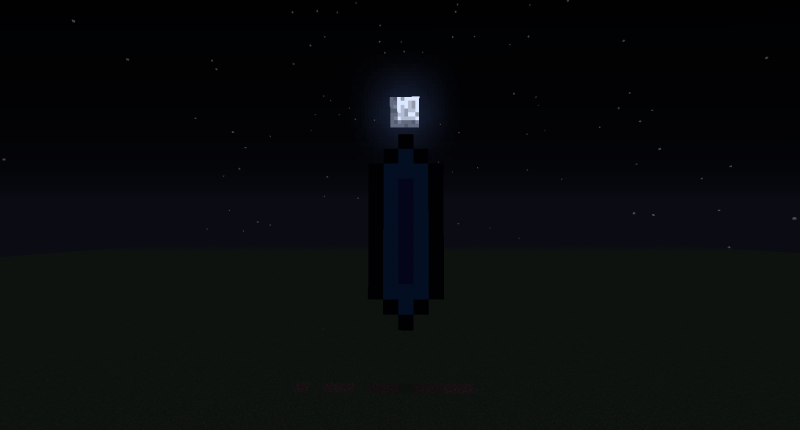 You have been chosen to fight the ruler of all Mobs. 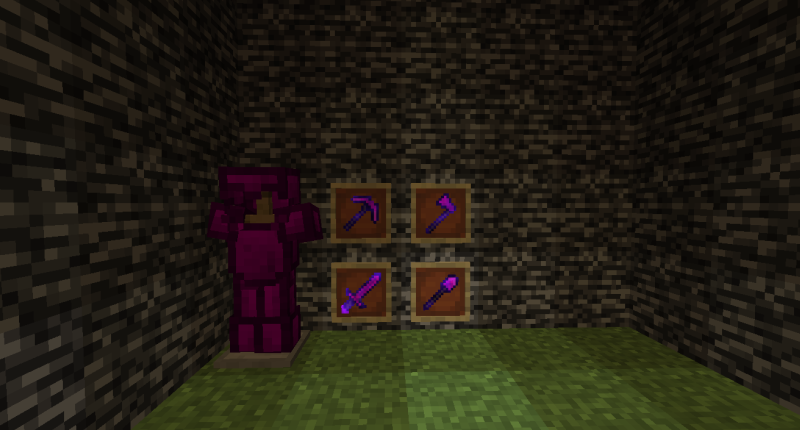 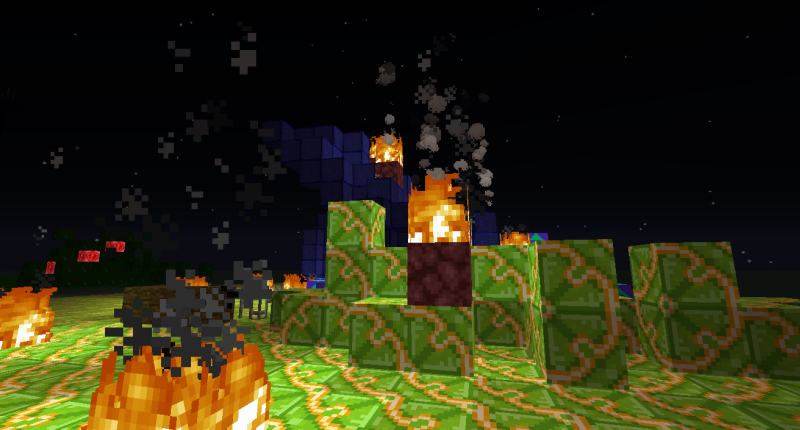 To survive the many terrors. 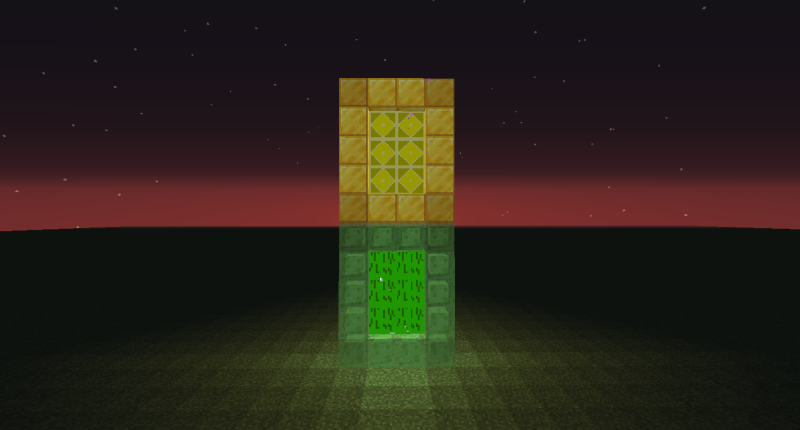 Explore the Overworld and beyond... 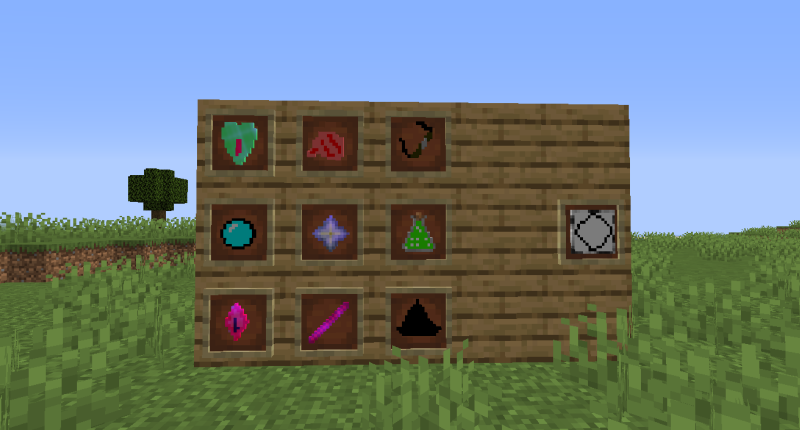 In order to collect the many valuables... 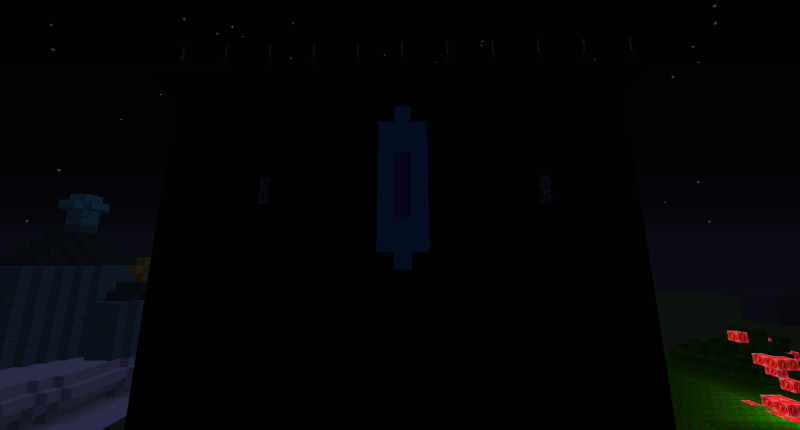 To take the fight to who we fear most.

I have been exploring this place far more than you, and I must warn you about the dangers that lie ahead. As you may know, mobs spawn constantly, but the main mobs' leaders live here too, all reporting to Him. My friends and I once defeated all the leaders and tried to summon Him, but when we did, He was more powerful than anyone could ever imagine. Only I managed to escape His grasp. I'm recording my eleventh and final disc that should tell you about the new leaders, where they live, their weaknesses, and how to resummon our nemesis. I bid you good luck on the journey I've failed to succeed.

The releasing of this mod. This mod includes:

Biome: Cloudy Oasis, (Where the Snuff is found)

EDITS: The top middle space on the crafting table when making His Homing Beacon is now occupied with the Ender Dragon Egg instead of an Entity Crystal.

BUG FIX: All humanoid (Biped) mobs' textures fixed, if anyone knows how to fix the others, (e.x., Mama Bites, Jeb, Bubbles, Snuff), that would be great.

FIXES: All textures are 100% fixed, Clouds can now sustain the Misty Magnolia, and He can now be summoned anywhere.

Happy Nether Update! I'm sorry that this was published so close to it and now runs on 1.15.2, but to make it up to you, I've added brand new mobs into the different boss areas.

FIXES: The Snuff now sniffs out bosses once they're in close range, (not the easiest to do, but you can now do it).

Also, because my ideas for this mod are going dry, (or at least until I find a good sound recording website, if you have any suggestions, that'd be great), I'm now working on a new one, and for all you Notch fans who remember "raqreqentba", see if you can decipher the description of the Zombified Iron. That will be the name of my new mod, hopefully to be released by July.

There is also a mistake on the Gunpower skin. I was thinking about fixing it, but decided to keep it as a good gag. See if you can find it.

EDITS: Jeb can now spawn in the arena, and Mama Bites also spawns in the Spider Barracks.

EDITS: I've edited lots of the bosses' behaviours so they feel a little more lifelike. (e.x., Quickdraw will now stalk you from a 35 block radius, so it's entirely possible that he's right behind you now...)

Two out of four are dungeons, and three out of four hold some cool loot. Or they should unless they don't spawn in, so let me know if anything doesn't seem right.

NEW Blocks: Mysterious Creeper Metal and Deactivated Creeptonium. (Surround it with emeralds in the crafting table to make it active. This is here because since the original will explode if mined, this will let you guys be able to build with it).

NEW Mob: Captain Creeper (You won't see him in Survival, since I was going to do something with it, but decided to hold off until the next update. For now, enjoy the dapper Creeper).

Most of the stuff that has come out in this update would probably confuse you, (mostly what's inside His Crypt, the saucer, and possibly "Is He a Chunky Boi?") but I do have something in my head, and it will all make sense when I'm done. I hope you enjoy it all!

Also, when you log into a world that was made before this update, it will warn you that some very... um... interesting things were removed. Pretty much what happened was that I was messing around with the workspace before I found out I could publish the mod. So this entire mod is wrapped around our favourite Minecraft meme with no pupils being the main boss or enemy. When I went to publish the mod, I read over what MCreator would support and what it wouldn't, so that didn't really go well with this mod. Before I released it, I changed all the in-game names to what is now "Him" and only now did I figure out how to reset the ID. Everything still works perfectly as if nothing happened, so I hope that makes a bit more sense.

I've been looking forward to this update. It's supposed to add in what I think a Creeper is, and this will definitely make pranking your friends lots of fun.

NEW Structures: The Button, Shuttle, and a Potions Lab, (The Potions Lab is just something else I got done. it's not as important in this update).

Hello 2020.4! I've been waiting for this update, because now I can make Enchantments.

NEW Enchantment: The Slaying Enchantment. This can be put on swords and axes and goes up to level two. If you're attacking one of the bosses that I've made, it'll do 10-20 extra damage. Since this would be crazy OP however, I buffed up all of the bosses' health. No more one tapping. (This enchant won't work on the Ender Dragon or the Wither, so keep that in mind).

NEW Blocks: Termite Eggs and the bottom and top halves of a rotten door, (All shall be explained eventually).

EDITS: I've changed the interior of two of the structures, to make them a little more playable. The doors of His Crypt have been changed to be rotten instead of iron, have hidden most of the command blocks within it to be slightly more safe from prying eyes, and on the second floor with all the dispensers, in the original of that, the bats probably triggered one of the dispensers with eggs in them and may have spawned a chicken, which then triggered everything else. I changed what's now inside so there are no eggs or spawn eggs within them, (except for Vexes, but I don't think they can trigger anything), and made it far less painful for me if I have to fill them back up again. Some of the spawners within are different too. In the Shuttle, I've also hidden all the command blocks and have significantly lowered the amount of Creepers inside, since last time I checked, it was practically overflowing. Some of the bosses' hitboxes I have shrunk so I'm hoping they'll be less glitchy. His spawn egg has been removed from the creative tab and can now only be summoned via HHB. When you load up a world, it will say that some stuff is missing, there isn't, I just rearranged the creative tab. Also, I've recently read that an axe does more damage than a sword but swings slower, so I tweaked the Entity Axe. Hope you enjoy this update!

It's here. Finally. I've been waiting a very long time for this update. Everything will now make sense, and all my secrets shall be revealed...

NEW Structures: Endgame Hole (See if you can figure out how to get it open), One-Ten (All they are are just humps of dirt with chests in them, barely a structure).

NEW Steve Entries: This mod has been in my head for a good three years and only around late May this year I began working on it via MCreator. During the three years I've been thinking of this mod, I've also thought up a bit of a story that goes along with it. So I've been trying to put it into the mod. At first, I tried commands, which was a bad idea because it was literally the day after I installed MCreator. Then I tried music discs, which I got pretty far into, but when I tried to contact the person that I wanted to narrate them, they never replied, so I assume they lost my email. After waiting a while, I simply decided to write in a bunch of books and hide them throughout the Overworld. So after a really, (and boy, do I mean really), long time revising all of the entries, I put them in the chests hidden in the lumps of dirt. You can probably come across them while you're mining. Each lump is hidden in and made out of the blocks from the biome that entry refers to. There are eleven books, 201-212, minus the eleventh one, which actually is a disc and is already in the game. They work not unlike how the Twilight Forest expresses its storyline, which I've recently found out after watching a lot of videos, but that was completely unintentional. 205, 209, and 210 are probably the best. If you want to fully understand, get the most out of this mod, or race your friends to see who can get them all, you might want to be on the lookout for these "lumps of dirt".

EDITS: Mysterious Creeper Metal is now unbreakable, (usually), so nobody can escape the shuttle by ways it was not designed for, Flesh and Bone will now do ticks of damage to the living and give strength to the resurrected, The Eye of Him now has a shattering secret, and I improved all of the fighting techniques for the bosses, so Quickdraw can now one-hit you, Bubbles and Crimson now set you and the world on fire, Gunpower will now actually attack you with fireworks, Bewitched's potions now give negative effects, and dealing with Him and His trident is now much more of a pain, and by that, I mean He now deals even more damage, and if He hits you, well, have fun with your blue replicas.

I was planning for this to be the final update, but I think there may be one or two more, mostly to try and make Globulo less laggy so you can ACTUALLY EXPLORE IT, so stay tuned...

Thanks for the feedback. This is my first time doing this and I'm working on new techniques. I'm also hoping to add in different structures for the new different biomes.

if u need some help with textures i can try !!

haven't played it, but awesome story and idea

Most appreciated. The textures are a little altered though. I've tried novaskin but when I tested it, they have no face or legs. Does anyone have any suggestions for tutorials on textures?

One thing I forgot to mention in the changelog is that I changed the recipe for the His Homing Beacon. The top middle space is now occupied by the Ender Dragon Egg instead of an Entity Crystal.

I don't know what I'm doing, clearly, as I also forgot to tell you guys that Amber, Barely Living Life, Luminescent Spider Eggs, Creeptonium, and Glow in the Dark Slime now exist in the mod as well.

does the eye of him drop an egg? if he doesn't, you know that the ender egg is non-renewable, right? so you can only summon him once.

I've thought about that too, and I'm thinking on putting more Ender Dragon Eggs in other structures in future updates. This can give you the option of not fighting the dragon, but you still have to defeat, like, nine more bosses in order to get to the final one. Consider it as a break. For now, sit tight.