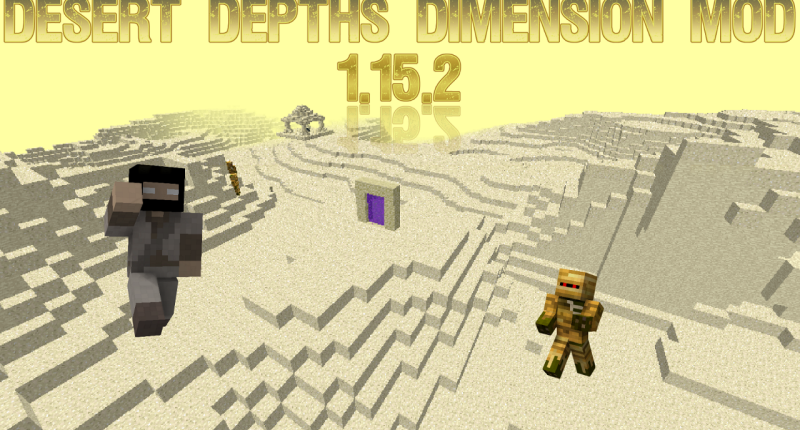 Desert Depths Dimension - A modification that adds a new desert dimension to Minecraft with new mobs, structures, a boss and many other interesting additions. Without extending it, I start the presentation:

Desert Fort - a structure with 2 spawners, a well and traps
Desert Pyramid - the structure most rarely generated and the largest in modification! It has a boss and a lot of traps!

There are three types:

Normal - takes 2 hearts of life upon entering it

Flame - sets fire to it after you climb it

Poisonous - poisons upon entering it

Sandman - a sand man that generates everywhere in the world He is neutral and a normal saber and sand drops out
Desert Spider - fast and neutral to the environment, and golden. A thread drops out of it
Desert Knight - a dimension defender neutral to the player, but hostile to mummy and desert terrorosist. He drops Knight Saber and Shield
Desert Terrorist - terrorist, enemy of everything that moves. He drops a Terrorist Saber
Mummy - The mummy that can be found everywhere attacks most of the mobs, including the player. It drops ashes
Scorpion - a small but dangerous mob that can poison the player when attacked. Nothing comes out of it

Green Crystal Ore - ore that is generated in the Desert Depths dungeons. We can make a block, a sword, tools and armor out of it.

New Boss Pharaoh - The Boss is armed with a Mace of the God's that he can shoot at the player with lightning. He is also armed with his armor, and when he dies, his nether star drops out, sometimes his armor and the mace of the God's rarely and quite a lot of experience points.

The modification is quite small, but it has interesting additions to our game. Feel free to download and evaluate positively and I will make more interesting modifications. See you soon!

This is amazing! I found this because im going to make my own desert dimension mod called the Desolate Wastes Dimension. I love this!

surprised this doesnt have more dwnloads