The Worm in action

The biggest Minecraft-world brains like Stevenson and Stevenstein introduce their newest technological innovation, The Worm.

Worm Industries is a technology mod that offers you the Worm, a Tunnel Boring Machine.

Two Body parts and one Drill control part make Drill body. The recipe works in both directions (control part on the left and on the right).

Drill body with Drill head (recipe is shapeless) make the Drill you can place.

It has to be placed on 3 rails in a row (just under the body, not the head). Arround the rails there has to be space (air) for placing it. Every problem with placing will send you a message (not on the rails, not enough room for placing...).

The rear part is a control console. Open its inventory, put a fuel, rails to place and some rocks (stone, cobblestone, sandstone, andesite...) for making a bridge in case of a hole or water under the drill. After starting the drill it will consume the fuel for its work. Blocks in front of the drill will be mined (except bedrock and obsidian) and put behind it. The drill will place a rail in the direction it is going and in case of some unsolid block (water, lava, air...) under it the drill will build a bridge from rock blocks. 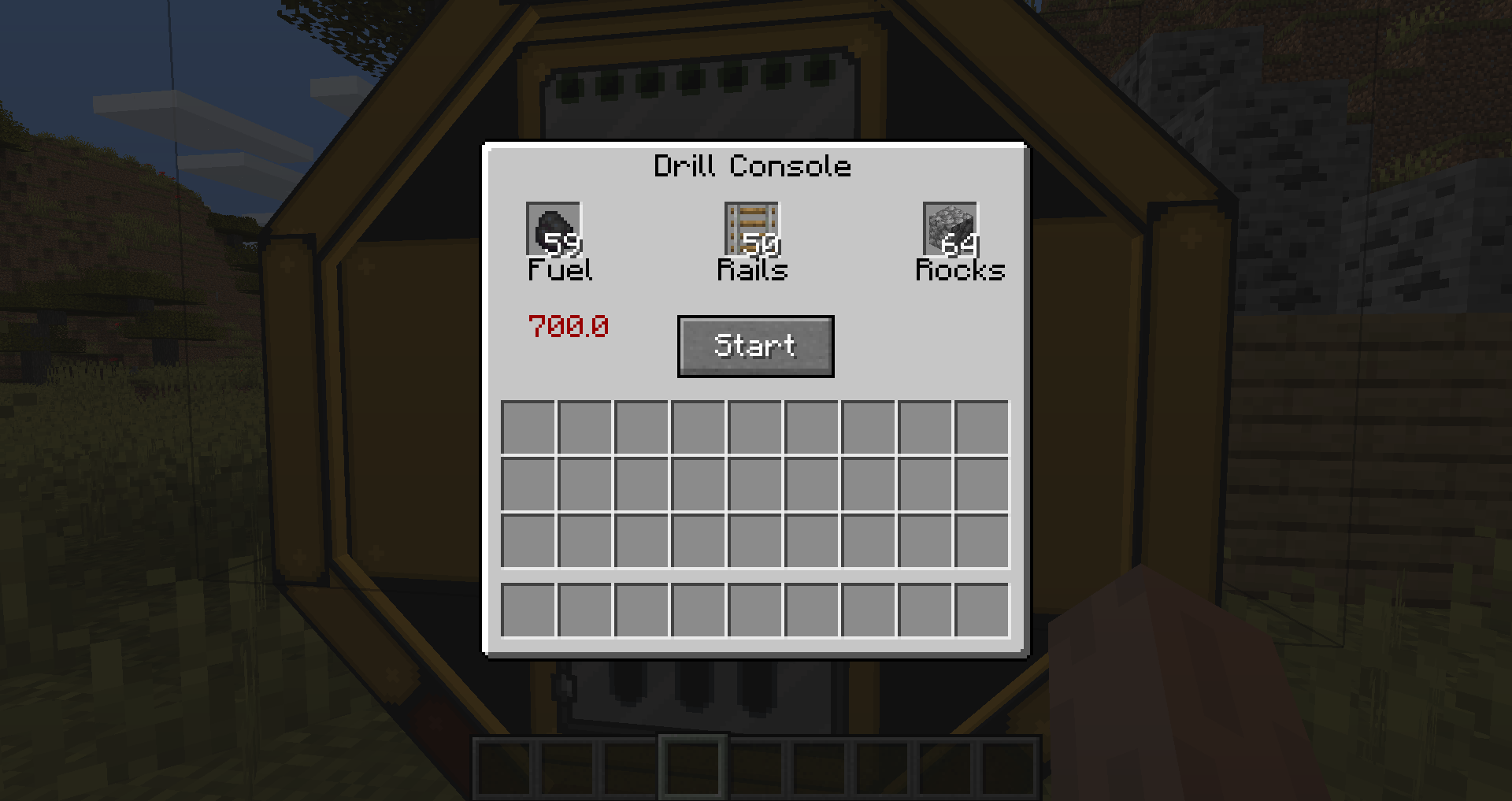 The drill also detects water, lava or portal blocks in front of it and automatically stops when some of it appears. Of course the drill will stop if no fuel or no rails are in its inventory, if it can't build a bridge, if non-mineable blocks (obsidian, bedrock) are in its way, if it's not on rails or if you stop it manually. Every turn off situation sends message describing the problem to players with exact coordinates of this drill (in case you have more than one drill or you are far away from it).

You can take or put items in the inventory of the drill control block only when it is in Off state! You have to stop the drill manually or wait for stopping itself.

When in On state the drill control part emits light (due to burning fuel) like a furnace when on.

When one (or more) part of the drill is destroyed, the whole drill will be destroyed and it would spawn the drill item gem.

Fuel system is based on Vanilla Minecraft and so far it can utilize Lava Bucket, Blocks of Coal, Dried Kelp Block, Blaze Rod, Coal, Charcoal, Wood Logs and Wooden Planks. Burn times are set to Vanilla values and every move of the drill costs you 450 units.

Pictures from the text:
https://imgur.com/a/0lGRXWr
I will repair it soon.

I love the thoroughness put into this!

Thanks. I got several ideas to improve it and make bigger drills. So I think I'll spend a little bit more hours working on it.