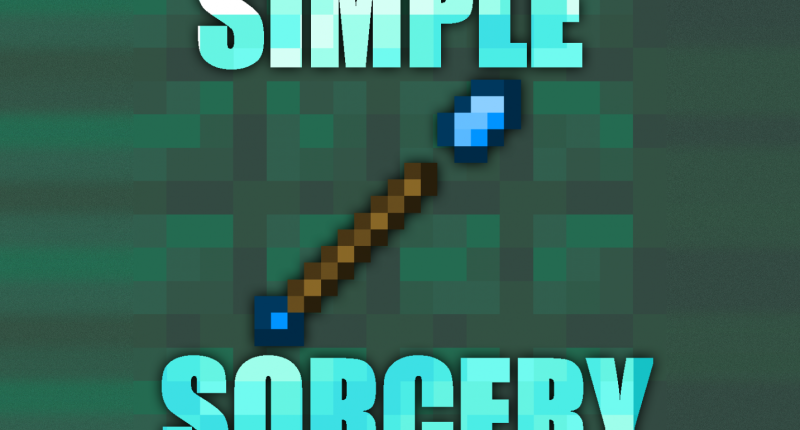 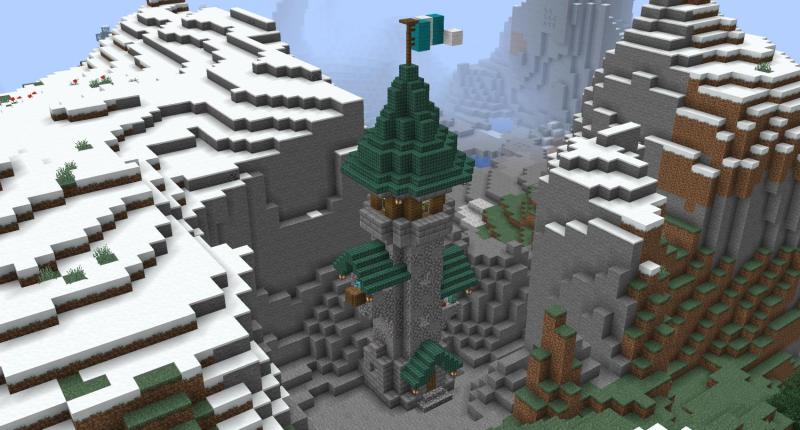 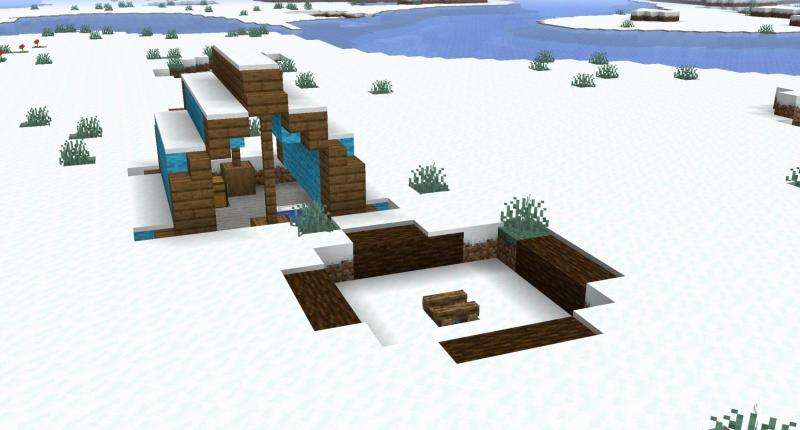 Bard Camp... Partially in the ground 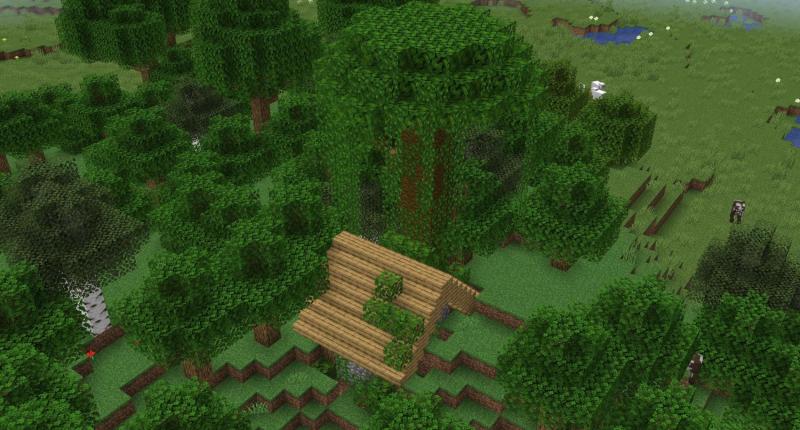 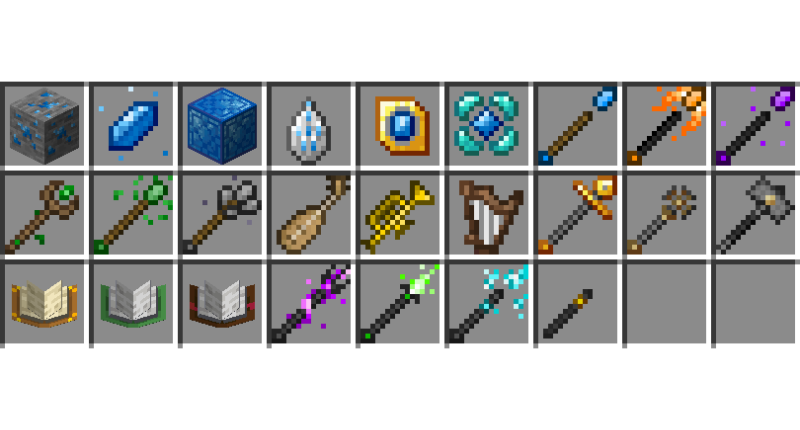 All the items in version 1.2

Later on in this mods development I found out that a youtuber named SystemZee came up with a very similar concept. All but 1 feature in this mod were added without the influence of his video. The 1 feature is the option to use XP instead of durability.

Druid weapons deal with the more nature themed abilities. They do not attack with one exception. Bards focus on area of affect type attacks. When using a bard weapon you don't tend to have to focus on aiming. They are good against crowds. Wizards usually get the main projectile attacks, with a couple of exceptions. They can be good against single targets or groups. Clerics work mostly as a support class, with the ability to heal and strengthen friends and enemies. They also have a few offensive moves. Necromancer mostly focuses on summons, but has a few other types of attacks too. Charms often give players status effects rather than being aggressive with one exception. They are used by being put in an offhand. Multi weapons can have any of this mod's new enchantments (other than wand. Wand cant have charm enchantments), but at a cost. Depending on what Multi weapon
you use, the cost is either the crafting cost or the durability of the weapon.

List of enchants at their max levels are:
Bulking III - Charm: Gives player the strength effect
Swifty III - Charm: Gives players speed effect
Leaper III - Charm: Gives players jump boost effect
Regenerative III - Charm: Gives players regeneration effect
Thunderous III - Charm: Causes it so when players are at 1 hp they will be struck by lightning, to get revenge on who killed you (since you were probably gonna die anyways). Not recommended
Firing V - Bard: Shoots arrows in multiple directions around you
Airblast - Bard: Gives nearby enemies wither and levitation for a few seconds
Flame Zone II - Bard: Sets nearby enemies on fire
Paper Blizzard IV - Bard: Shoots a 'blizzard' of paper out around you to give your enemies paper cuts
Frost Zone II - Bard: Slows down nearby enemies
Pierce Shot - Bard: Shoots a fairly powerful but inaccurate arrow in somewhere front of you
Darkblast - Bard: Gives you invisibility and nearby mobs blindness. Best for pvp
Petrify - Druid: Can turn blocks into stone and gives high levels of slowness and resistance to enemies. Best for fleeing a fight
Antidote - Charm: Removes poison and wither effects from player
Poison Ivy - Druid: Pretty much just a long range lingering poison potion
Bushes - Druid: Places leaves around you
Clearing - Druid: Clears any storm or rain
Storming - Druid: Starts a lightning storm
Passage V - Druid: Changes the time of day
Soiled IV - Druid: Summons falling ___ the ___ depends on the level of the enchantment. Level does not correspond to usefulness
Lightning Bolt - Wizard: Shoots out a projectile that will summon lightning but only during lightning storms
Warpgate V - Wizard: Temporarily places survival mode players into spectator mode. Time is equal to level times 0.5 seconds
Shockwave III - Wizard: Electrocutes enemies. The electric shock can travel from entity to entity and even shock you
Blasting III - Wizard: Causes and explosion at the same power as a creeper
Flare III - Wizard: Shoots a projectile that sets enemies and blocks on fire
Flash Frost III - Wizard: Shoots a projectile that turns water into blue ice, and gives enemies slowness
Royal Gala -  Druid: Turns enemies that are almost dead into apples
Mystic Healer II - Cleric: Gives mobs in a radius he regeneration effect
Unholy Curse - Cleric: Gives enemies one of 3 random debuffs at a random level (1-3) for a random amount of time (0-30 seconds)
Bane of the Dead - Cleric: Deals 20 damage the closest of each type of vanilla undead mob, only within a 10 block radius
Holy Blessing - Cleric: Gives allies one of 3 random buffs at a random level (1-3) for a random amount of time (0-30 seconds)
Healing Ray - Cleric: Shoots a projectile that will heal allies
Heavenly Glow - Cleric: Places an invisible glowing block where you are standing that will disappear after a short amount of time
Vexing - Necromancer III: Summons vexes that will fight for you. They despawn in 20 seconds
Rising - Necromancer III: Summons zombies that will fight for you. They despawn in 20 seconds
Infestation - Necromancer: Summons a toxic spider that will fight for you. It despawns in 20 seconds
Biting - Necromancer III: It summons a group of evoker fangs in a line in front of you.
Skull Blast - Necromancer III: Shoots out skulls at the enemy like a shotgun
Webbed - Necromancer: Places cobwebs at the feet of all nearby mobs, including you. This can be used to remove fall damage from a long distance fall

In addition this mod adds 5 new naturally generating structures, and 1 new ore a bit rarer than diamond. The structures are Wizard Tower, Druid Hut, Bard Camp, Cleric Island, and Necromancer's Tower. The ore is manastone, the main ingredient of all the new magic items.

To toggle if a weapon uses xp and/or durability use the command "/ssconfig" It will switch it between them at every use. You must have cheats enabled or be opped on a server to use it. It defaults to durability and xp upon world creation.

If you have any ideas you want added or bugs you want fixed click on this link to submit them. I cant guarantee everything will get in

The mod is great!m I recommend MOTW.

It probably wont win, but I'll submit it anyways. Thanks :)

You actually did win tho, good job!

I remeber Matej saying if he comments on your mod little before motw is relised it means je like a lot. You'll win I'm sure!

Nice! Some textures can be improved, but the mod is cool :) Does these instruments act as weapons?

I agree on the textures. Particularly the charms, and manastone. The instruments do act as weapons, but just like all the other weapons they have to be enchanted first.

whoa, this is awesome!

Beautiful structure and your enchantments ideas are impressive!