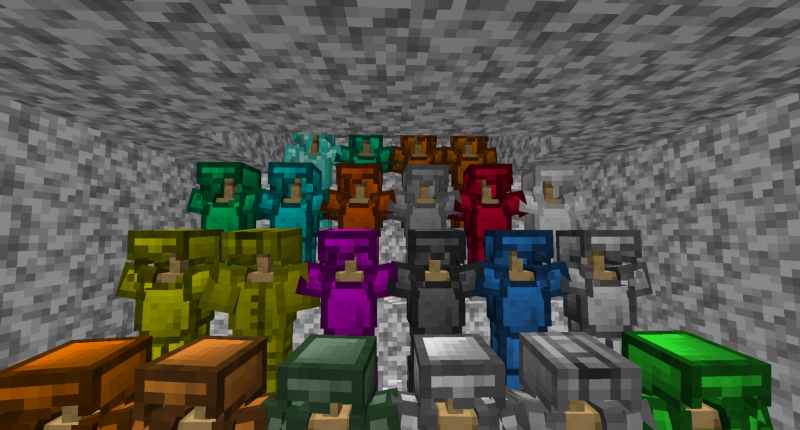 All Armors At this Point (Version 1.3 fix)

Welcome to the Mob Armors! Mod!''

This Mod might stop because of the End of MCreator.

New Mob-specified Armors that can be dropped from them!

Mob Armors have some cool Effects, like shooting fireballs, throwing Enderballs (not Pearls!), or just eating the Armor with custom Keybinds!

"Ability: ###" means a passive Ability with any Part

"Full-Set-Ability: ###" means a passive Ability with the full Armor equiped

"V-Ability: ###" Ability, where you need to Press the V-Ability Button (Look in Controls, Standard: V)

"Full-Set-V-Ability: ###" Ability, where you need to press the V-Ablity Button and have the full Armor equiped

Ignore the Projectlies in the misc section, they are just for V-Abilities for some Mobs!

Mob Armors are only dropping if the Mobs you killed is here:

Have fun trying to get the Sets! Updates are coming fast, I don't think I discontinue this Project! (Fox and Ghast can't drop this Moment)

Send us Bugs here in the Comments!

**Mod Armor Textures CAN be replaced with your help! Try this:**

And Ideas too, of course!

Like I said,
@TeoxexYT I can try it, but I'm not good in drawing :)

I thought this had armour that mobs could wear

@TeoxexYT I can try it, but I'm not good in drawing :)

Giving these armors some special models and textures would go a long way in making this mod more appealing ;)

Thanks for telling me, but im bad in Modeling and Drawing...

Thanks, do you have any other Ideas for the Mod?

Whooo a Developer commented this?

I suggest editing the offical minecraft textures for armour :D