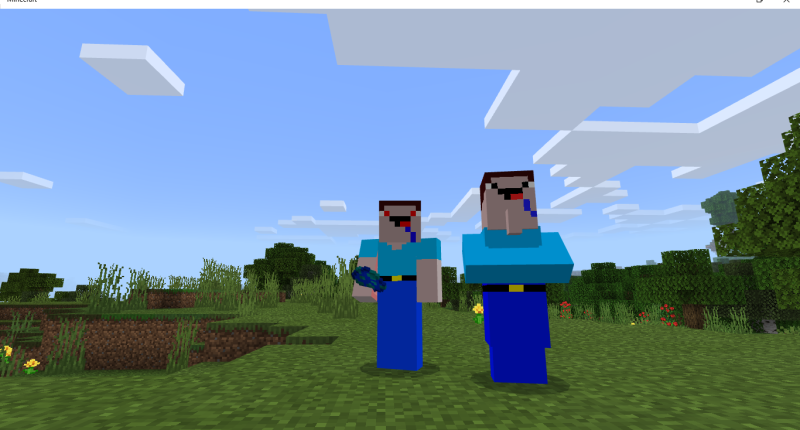 Mobs added are -
1. Buffalo - This mob can spawn in ANY biome and will attack you if you attack it. It also is an alternative food source, it drops buffalo meat which is better than beef and almost just as good as porkchop
2. Duck - Another alternative food source which can also spawn in ANY biome. It drops duck meat but its A VERY BAD food source, so I dont know why will you kill it and not just keep it as your pet :)
3. Mouse/Rat - This mob doesn't have a purpose YET, but it is pretty scary if it comes outta nowhere.
4. Noob - Just a fun mob to play around with, will naturally spawn ANYWHERE, and will drop clownfish/tropical fish. In the picture above, there is me standing with the 'noob' mob.
5. Demon mobs - Demon mobs are the same mobs but with different colour and are MUCH stronger and only have a small chance of spawning in exchange the normal mob
There are 2 types -
(a)Demon Creeper - This red looking beast will not explode, but attack u for 5 HEARTS, it is MORE FRUSTRATING AND SCARY than a creeper as it will finish you in just 2 hits if you dont have armor, and it also has about 7 hearts more than a normal creeper.
(b)Demon Slime - This black medium sized slime with red eyes and green mouth, IS FAST, and does around 3 hearts of damage, and has an equal chance of spawning as a slime.
STAY TUNED FOR MORE MOBS, IF IT GETS 5 DOWNLOADS, I WILL MAKE NEW MOBS AND UPDATE THIS ADDON.