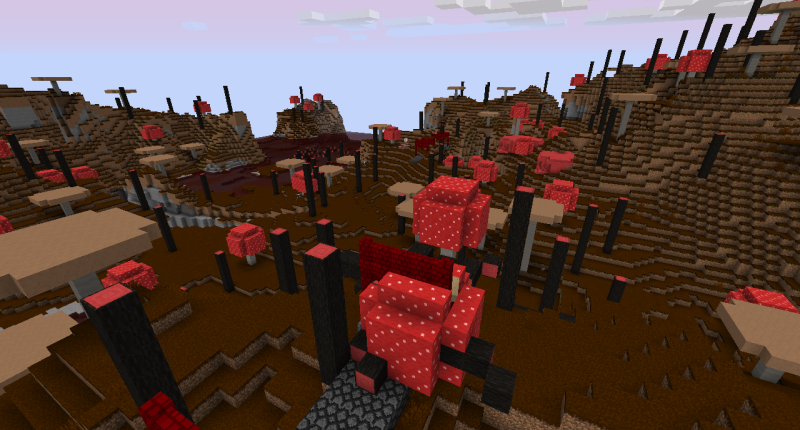 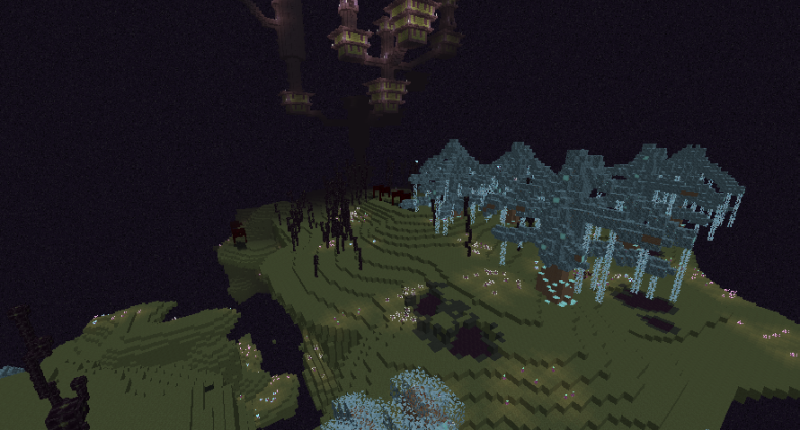 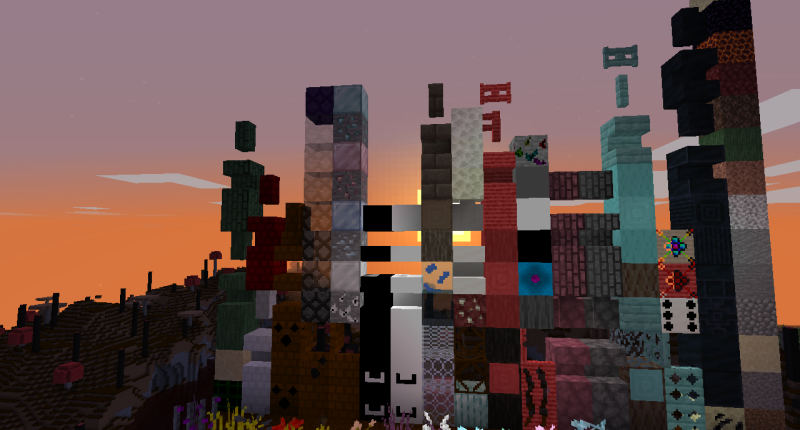 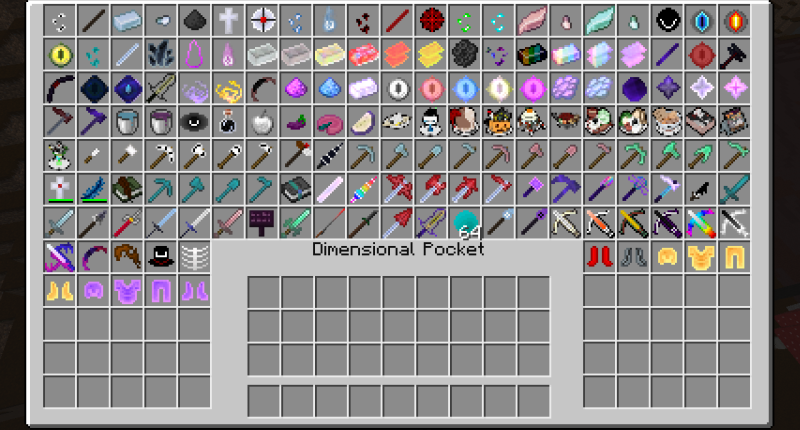 Have you heard of the Len'en Project? No? It's a series of bullet-hell shooting games, and that's what this mod is based on! It's okay that you have no idea what that is, though, because it's not required to enjoy the mod's content! Craft powerful tools such as the Eleventh Staff (switch dimension at will!), the Wings of Magritte (allows true flight!), the Tasouken (a powerful melee weapon!), the Rudhira (a bow that requires only your very life as ammunition), the Satellite Parasol (causes a downpour at its wielder's merest whim!), the Personal Barrier Field Armor (doubles your maximum health!) and much more, all waiting for you! This mod also adds a lot to worldgen, most notably hugely revaming the End dimension. So, what are you waiting for? This incredible mod isn't going to play itself, you know!

Documentation: I'm not going to bother explaining what every single item does, since that's noted in the ingame item tooltips, or detailing the exact steps to every single recipe, since everyone uses JEI anyway, but I will detail everything exclusive to worldgen, since a lot of people don't use JER or some stuff it simply won't show.

Ores and other resources:

Biomes:
The Unlost Woods biome spawns in the Overworld, it has extremely jagged terrain and a large number of giant mushrooms and patches of gravel. For trees, it has the leafless Dragon Blood Trees (which are a real kind of tree, you can look it up if you don't believe me), which require an Iron Axe or better to chop down; it also contains wild Eggplants.

Dictator Stick:
A devtool that has a full Dimensional Pocket inventory of hundreds of slots when right-clicked, switches your dimension like the Eleventh Staff when right-clicked on a block, allows you to fly in any gamemode like the Wings of Magritte and makes you completely invincible (even to the void or /kill commands!) when held, and can break any block or destroy any mob instantly. It can only be obtained through commands; its internal ID is vast_mugenri:dictator_stick.

Shall We Dance? Official Upload: https://youtu.be/m15x3LdusEI

-Salt Ore takes longer to mine, is slightly rarer, doesn't spawn as high up, and only gives one Salt Crystal without Fortune

-Dimensional Stone doesn't take as long to mine, is rarer, spawns in smaller veins, and only requires a Stone Pickaxe or better in order to mine

-Eggplant Stalks drop themselves and can be crafted into a single Eggplant each, or simply replanted

-The new types of wood can craft beds

-Unlost Woods biome mob spawning has been tweaked, most notably Rabbits aren't anywhere near as common as before

-Silver is slightly rarer; specifically, it now spawns in exactly the same way as gold

-Crimson Tool Rods can be crafted with a regular Tool Rod surrounded by eight Dragon's Blood Resin; the accidental omission of this recipe was the reason why I had to rush to get this update out as soon as possible, because it's a fairly important item

-Changes to recipes that use the Chisel and Hammer

-Petrified Groves spawn higher up and are far more common

-Altered the capitalization of some item names

-Unforged Alloy can now be converted to Omnialloy in the Blast Furnace, Glorious Ingots and Steel of Ametsukana are much cheaper, Unfused Elysian Alloy recipe has been slightly changed, the Elysian Armor Plating recipe crafts two instead of one

-The Compressed Dirt recipe has been fixed; it previously incorrectly required eight Dirt and one Podzol, instead of the intended nine Dirt.

-The Icebreaker applies Slowness for twice as long and deals one more damage, an error in its description has also been corrected; the Bankuruwase -DaviD- deals more damage; the Heat Lance -Minimum- deals slightly less damage, but attacks faster, and its ability is properly explained in its description.

-The Unlost Woods is rarer.

-The advancement "The Imperial Capital's Silver Bullet" has been renamed (it was previously "SILVER"), and it is now properly achievable.

-The Heat Lance -Minimum- and the Serpentine Glaive can each be crafted with either vanilla or modded Diamond Swords. -Fated Die structures in the Nether should spawn less buried now.

-Added Nutrition and Saturation denotations to the descriptions of all food, as well as a LOT more kinds of food. Seriously, a lot.

CRAFTING:
*The Dimensional Pocket crafting recipe gives three, instead of two, and the recipe has changed to reflect this.
+The mod's custom wood types can be used to make shields.
-Vanilla armor recipes are no longer overwritten, and the mod's old ones have been removed. The same is true of diamond tool recipes; the diamond tools that the mod adds are now unobtainable, but you'll still have them if you did before.
*Masterwork and Barrier armor recipes no longer require the previous tier of armor in order to craft.

ITEMS:
*The mod's Diamond Sword has the proper amount of durability, instead of just 100.
*Lignum Vitae tools have been retextured.
*Greatly modified Creative tab item order.
*Removed the tooltips of the Haniwa Doors and Trapdoors.
*Removed the nutrition and saturation-showing tooltips of food, because it's assumed you're using Appleskin to show that anyway.
+Silver makes a tool set in between Iron and Diamond in strength.
+*Antimony is a new ore that has been incorporated into many preexisting crafting recipes and makes a tool set equal to Diamond.
+*Aethite is much more common and now only requires a level three (diamond) pickaxe or higher to mine. Many existing recipes have been changed to compensate for this, and it now makes a tool set slightly stronger than diamond.
*The Materia Scythe grants Haste when held in your hand, not simply when in your inventory altogether.

CRAFTING:
*Changed the smelting/blasting time and xp reward for Aethite.
+Antimony Ore can now be smelted/blasted.
-The mod's now-removed Diamond tools can no longer be converted into vanilla ones
+All Silver, Antimony, and Aethite tools can be smelted/blasted back into their respective nuggets.

ITEMS:
*The Music Disk that plays "Shall We Dance?" has been renamed to "Music Disk".

GENERATION:
*Antimony now spawns one vein per chunk, not ten. This was a typo.

UNSTABLE 1.6A changelog
+ is an addition, - is a removal, and * is an alteration.
THIS IS A POTENTIALLY UNSTABLE ALPHA SNAPSHOT BUILD THAT MAY BE GLITCHY OR MISSING FEATURES

CRAFTING:
*Unreal Armor Plating is now more expensive, but you won't need as much, since you'll be upgrading your old Masterwork Armor at the Smithing Table instead.

ITEMS:
*Slightly changed the fun Easter egg that happens when you break a Quantum Hoe.
-Removed the exploit where you could spam disenchant the Materia Scythe or Quantum Hoe for free experience.

ADVANCEMENTS:
+There is a known bug where there are a bunch of advancements that shouldn't exist that are somehow obtainable.
*The advancement "Welcome to Unreality" is now invisible until completed, and its description has been changed.

+ is an addition, - is a removal, and * is an alteration.
THIS IS A POTENTIALLY UNSTABLE ALPHA SNAPSHOT BUILD THAT MAY BE GLITCHY OR MISSING FEATURES

CRAFTING:
+You can use the Smithing Table and one cobblestone to convert your old mod Diamond Tools into vanilla ones, and Masterwork Armor into Netherite Armor. These are temporary recipes that will soon be removed, so convert your stuff while you can!
*Unreal Armor Plating is now used to upgrade Netherite Armor, not Masterwork Armor.
*All crafting recipes that use Aethite have been changed to not.

GENERATION:
-Removed Aethite due to 1.16.x having changes to generation height.

UNSTABLE 1.6C changelog
+ is an addition, - is a removal, and * is an alteration.
THIS IS A POTENTIALLY UNSTABLE BETA SNAPSHOT BUILD THAT MAY BE GLITCHY OR MISSING FEATURES

GENERAL:
+Added tags to various items, such as properly identifying which blocks are types of logs, planks, or wood so that they will work with all vanilla recipes as well as all properly made recipes from other mods. Fences and Walls have also been identified for pathfinding purposes, in addition to which blocks can be beacon bases and which blocks are Dragon/Wither-immune; Ancient Debris can now replace Bloodstone and Ashstone.

CRAFTING:
-The overrides for Iron and Golden Armor recipes have been removed, as have the Masterwork Armor recipes.
*The recipe for Phantasmal Membrane has been slightly changed again to require Phantom Membrane.
*Lignum Vitae tools now require Vital Rods instead of sticks to craft, which are a new item made out of Lignum Vitae Planks.

BLOCKS:
+Re-added walls.
*Dragon Blood and Lignum Vitae logs previously broke faster with an axe, but much faster with a pickaxe. This has been fixed.
*The Shrine Road and Phantom Road no longer give speed when stood upon, but rather are slippery instead; the former is equal to ice, the latter superior to even blue ice.
+Unsmelted Ores now give experience when mined without Silk Touch.

*Fixed an issue with the recipe of the Tasouken.

*Exponentially lowered the amount of saturation given by food (thanks for randomly changing how it works, Mojang)

Thank you! I'm glad to hear you appreciated the mod!

I'm really glad to hear you're enjoying your experience!