Don't Eat too Much! 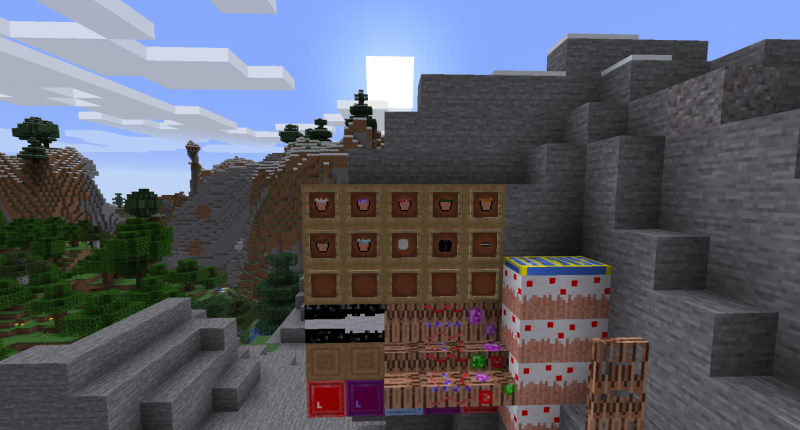 -almost- All the features! 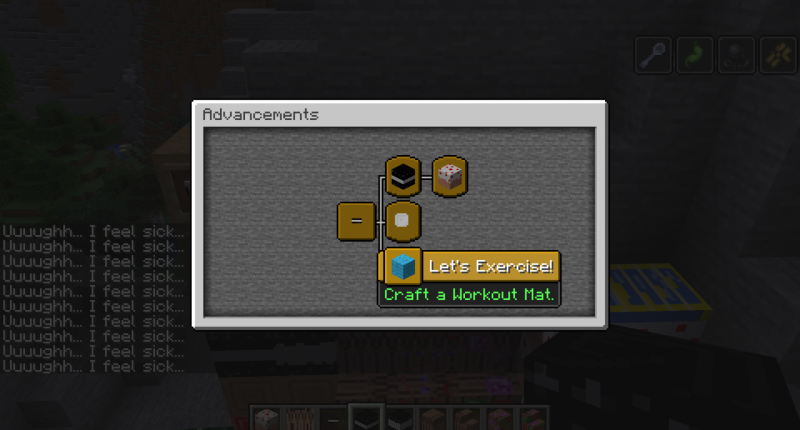 -most of the- Achievements!

Welcome to the Alpha version of

Don't Eat too Much!

A mod about making unhealthy food, eating too much of it, and suffering the consequenses.

Oreos (with a Double Stuff varient) as of version alpha 1.2

Gingerbread, with a door and two varients (stairs, too!) as of version alpha 1.2

A Brand-New Exercise Mechanic in Alpha 1.3

Commands to Clear and Increase Fatness (As of Alpha 1.2)

Seven Achievements! (As of Alpha 1.4)

A Gingerbread House structure made of food. A sinister secret hides within. (As of Alpha 1.2)

More on the way!

Oreos are the first thing you'll make in this mod. (Probably.) Oreos are made of two Oreo Cookies and one Cremè Filling in the middle. They increase the 'Fatness' meter by one when eaten. You can make an Oreo block with nine Oreos, when placed, you can right-click the Oreo block to "eat" it, increasing fatness by 4-6.

Big Cakes! Really, no one should make these. Requiring 3 cakes, an egg, a bucket of milk (the bucket gets put in the cake too), wheat, and 3 Cremè Fillings, it's a waste of resources for a food that behaves the same as an Oreo Block. The good side, however, is the amount of saturation it gives you. You won't get hungry for quite a while after eating this.

Ah, yes. What this mod is all about. Getting fat. Firstly, eat one of the items listed above. This will increase a hidden variable called 'fatness' by a different amount per unhealthy food consumed. When the fatness meter reaches a mark, such as 10, a message will be posted to chat, i.e. "This is delicious." When the message appears,  the consequences will be delivered. From something as simple as Slowness I to Slowness V, Nausea V, Bad Luck V, and vomiting all over the place, the Fatness system will deliver some more excitement to your game.

The Witch's Forest! Rather strangely, witches don't naturally generate here. Maybe it's named after them for another reason... they're houses. GIngerbread Houses.

Gingerbread Houses! These dwellings of witches were made to lure innocint villagers, so the witches could eat them. Eat the house down and free the villagers, before they are smelted!

In Alpha 1.3, this system has fundamentally changed. Now you have to craft a Workout Mat (see Second Disclaimer). Right-click it to open it's GUI. You can do pushups, sit-ups, or jumping jacks. Each workout removes a certain amount of fatness, but also increases "exhaustion" by a certain amount. Once your exhaustion hits a certain level, you can't exercise any more until you sleep. Sit-ups and jumping jacks, while decreasing fatness by far more than pushups, also give you hunger for a short amount of time.

Disclaimer: This mod is not intended for Multiplayer, and it was not tested in Multiplayer. Averse side-effects may occur when playing with friends in this mod.

Second Disclaimer: It may be hard to figure out some recipes without the help of JEI/NEI or Quark’s recipe unlock feature. Please download one of those mods to enhance your playing (and barfing) experience.

Third Disclaimer: This mod is in Alpha. It may not work well, crash, or be buggy. Please report ANY issues in the linked forum.

-Alpha 1.0: Everything you saw on the mod page.

if you add more things it can be a great mod :)

Thanks for your support! I hope to get another update out today, and in about a week there will be gingerbread houses and crafting gingerbread. Stay tuned!

Working on the gingerbread houses now. Thanks for 16 downloads!

Don't eat too much!

Or else you’ll get fat!

Okay, working on adding pics to the mod page!

Technical difficulties... after tutorials, I still can't get the link to work. ): Oh well.

DON'T EAT TO MUCH!!!, or you get fat by eating candy, oreos and cakes and more

Good mod :)
I think the fatness variable would make you suffer hunger less often at lower values (by giving you saturation maybe; the bad effects would still only come once the mark is reached) so the player is challenged to moderate their diet without completely refusing the foods added by the mod

Thanks so much for your feedback! I'll start working on that right now. (Literally.)

I'm nearly done with the Balance Improvements update, including your suggestion! Sadly I can only figure out how to make saturation lower less often, but the food items (and the blocks) now give a high enough amount of saturation that it would be useful to eat them. Also, as a little bonus, there are now six achievements. Thanks for your suggestion, and have a nice day! (:

I meant, I CANT figure out how to make the saturation lower less often. Sorry!

I thought saturation would make you lose hunger less frequently, but it actually is like regeneration for hunger points, so simply making fat foods give higher saturation when eaten (as you did) is perfect :)

Wow, thanks for 7 downloads everyone! Can we get to 10?