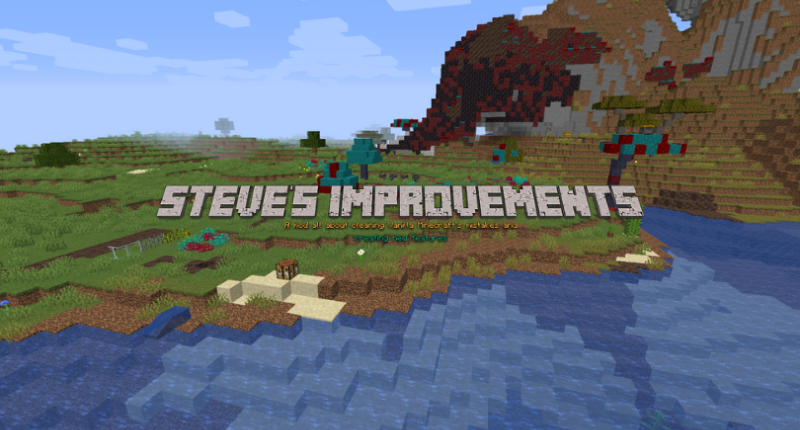 This is a mod all about cleaning Vanilla Minecraft's mistakes and creating new features! Currently, the mod is still in development so everything seen in this version is subject to change! I will add more stuff soon, in the near future, My goal/plan is to add over 100 features, currently, there's not that many... but still plenty of stuff to play around and have fun with! As always, credit and thanks to MCreator for making this mod possible!

+Soul Beads! This is a powerful item that allows you to change the overworld to the nether with a simple right click! Well, multiple right clicks, you can only change on block at a time! Durability will be fixed in a later version if it doesn't work now. Crafted with four (4) Soul Soil surrounding Soul Sand!

+Cheese! Either gives you Luck, or bad Luck! Crafted by putting Milk in a Furnace or Smoker! Cheesy!

+Renaming Table! Allows you to rename any Minecraft or modded item without the italic font, you don't even have a limit to what you can name items! Crafted with two Iron Ingots and two Gold Ingots right on above those Iron Ingots! You can rename an item to have infinite letters! Finally!

+Sand Paths! Darker Sand that is not affected by gravity! Use a shovel on sand to get Sand Paths! You can always use a hoe to revert it back to normal sand! There's even Red Sand Paths! The variety!

+Brushes! Archeology! Sort of! Brushes can be used by right clicking on sand or red sand, you'll either get a Bone, or a Poisonous Potato! Wouldn't recommend eating the Poisonous Potato, or the Bone for that matter! Brushes are crafted with a stick, a feather above that stick, and two strings on both sides of the feather!

+Hay! Minus the bale! Use shears on Hay Bales to remove the straps! Don't worry, you can always get your Hay Bale back by collecting the straps from the hay bale and right clicking on the hay bale with the straps in your hand!

*A cactus will now deal slight damage to you if you try to break it! Even potted ones! Kind of like what they were planning to do in the Alpha days of Minecraft! The nostalgia!

That's it for now, check back soon for more updates!

1.0.1 (Why did it take so long for this update?! It was only created 3 minutes after the creator realized he forgot to put the description on the mod under configuration!)

- Added Lush! A new type of grass with the grass block texture on all sides! Will most likely generate in Lush Caves in the Caves and Cliffs update! Crafted with 4 grass blocks in a crafting table! You get 4 lush from that! Can be made into Farmland by using a hoe on it!

- Added Lush Paths! Made from using a shovel on Lush! Nice! Can be made into Farmland by using a hoe on it!

- Added Roses! They are old flowers that were replaced with Poppies! Now they are back! Can be crafted into 2 Red Dye!

- Drinking drinks now has a chance of playing the burping sound! BUUURRP!!!

- Fixed cake playing the burp sound when shift-right clicking to place another block on top of it!

- Added Prehistoric Rubble! Generates in a new structure found in the nether! YES!

- Added Ancient Tears! Made up of Prehistoric Rubble, and of course... 3 ANCIENT DEBRIS!!! (Something special!) Found in the nether!

- Fixed some sounds not playing!

Look forward to 1.4.0! Needed to get this update out to fix crashes so there aren't many new features! Be aware that there will more than likely be more in version 1.4.0 when it comes out!

1.4.0 (The long-awaited update is finally here! Adding a ton of features, 16 and counting! The new update name feature has also been added and the update name is: Big World Update!)

- Added Sinstealers! They look like retextured silverfish for now, but will be changed later! They also don't spawn naturally yet!

- Added Crarped wood! Only comes with planks and log! This wood is a mixture between Crimson and Warped wood! Can't be used to craft anything beyond planks! That's what makes it unique!

- Added Forgone Lands portals! These are like broken nether portals from 1.16 update but these ones were eaten away by the crarped wood as food!

- Added Baguettes! Extra long bread! You eat a little bit of one at a time! Crafted with 3 bread diagonally in the crafting grid!

- Added Cheesy Bread! Ever wanted a way to enjoy a deliciously cheesy snack without getting the Luck or Unluck effects? Now you can! Crafted with one cheese and one bread!

- Added Locks and Keys! Locks are blocks that can block anything! They can be unlocked with keys! Locks are crafted with 6 cobblestone on the top and bottom of the crafting grid, 2 iron nuggets, and one gold nugget in the middle! Keys can be crafted with 3 gold ingots!

- Added Enderite! Like netherite but EVEN STRONGER!!! Found in the end! Can be made into tools, weapons, and armor the same way you upgrade diamond stuff with a Smithing Table! Craft Enderite Ingots with 4 iron ingots and 5 Enderite scraps! How do you get Enderite scraps? Mine Enderite and smelt it in a furnace of your choice! Either a normal Furnace or a Blast Furnace! It even has a cool new block! Crafted with 9 Enderite Ingots! You can only mine Enderite with Netherite! Upgrade gold stuff with Enderite today!

- Added Glow Rocks! They come in Yellow, Blue, and Red! They can be found DEEP underground!

- Added Chiseled Purpur! Can be found in End Cities replacing some of the normal Purpur Blocks! Crafted with 4 Purpur blocks in a square shape!

- Added Moonstone! Found in the End! Like an ore! Drops 2 Moonstone Chunks which can be made into a block again! To craft the block, use 9 in the crafting grid! It also crafts something very special!

- Added Levitation Orbs! This is that special thing! ^ Anyways, they allow you to levitate as if you were hit by a shulker bullet! Except you don't take damage, can't levitate as high, and you can actually use it anywhere, but be careful, it's not THAT durable! It only has a durability of 6!

- Added End Lanterns! A nice purple Paper Lantern! Made with 6 Popped Chorus fruit! 3 on each side, 2 sticks 1 one the top and 1 on the bottom, and one torch in the middle, or you know, you could find one in the end yourself instead of crafting one!

- Added Purpur Walls! Just for a final new block for this update! Also can be used for decoration! Crafted with 6 Purpur Blocks!

- Added Purpur Lanterns! They are a structure and not a block. But they are using Purpur Walls and End Lanterns!

- Added new advancements! There will be more in the future, for now, advancements only cover some of the mod’s end related stuff!

- Fixed some blocks and items from previous updates not having a crafting recipe! This mod is supposed to be survival friendly too!

- Fixed some issues with some blocks not rendering properly!

That's all for this update! Look forward to 1.5.0 coming very soon! It won't be that big but will still be pretty exciting!

1.4.1 (Speaking of survival friendly in the previous update changelog, forgot to add a recipe for Purpur Walls!)

- Fixed Purpur Walls not having a crafting recipe!

Again that's all for this update! Look forward to 1.5.0 coming very soon! It won't be that big but will still be pretty exciting!

- Fixed the mod desription under the mod configuration menu not having correct grammar.

- Updated the texture for Enderite ingots! They now look unique like Netherite ingots and the upcoming Copper ingots from the Minecraft 1.17 Caves and Cliffs Update!

Looking for mod update changelog? Check the description of the mod!

many little improvements together make minecraft great i guess.

This is really cool, I'm actually excited to see what's next

I can't wait to see your reaction when the next update releases! Trust me, you won't be disappointed! ;)

1.4.0 is out now featuring a ton of new features! I recommend 1.4.1 if you want craftable purpur walls!

I selected it on MCreator.