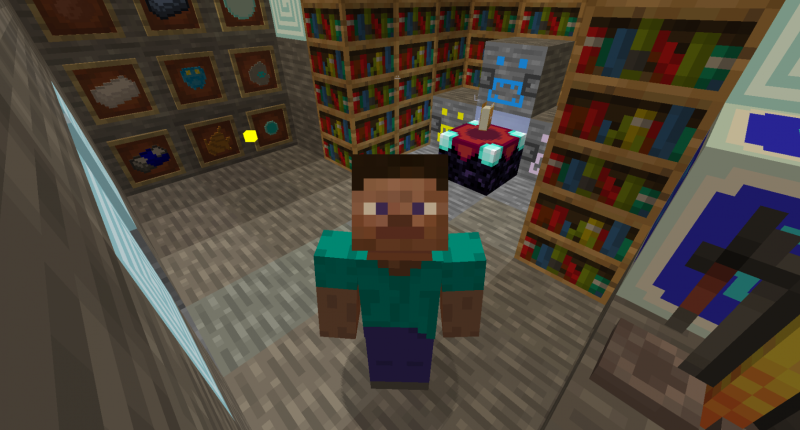 Cover image, a nice little house I threw together 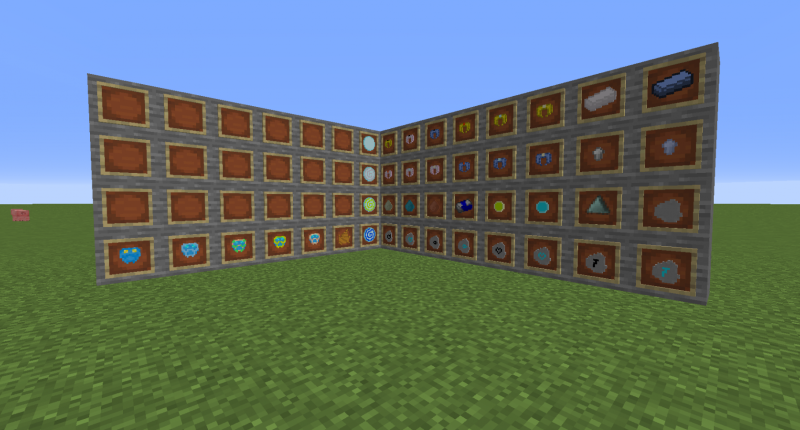 All the items in V1 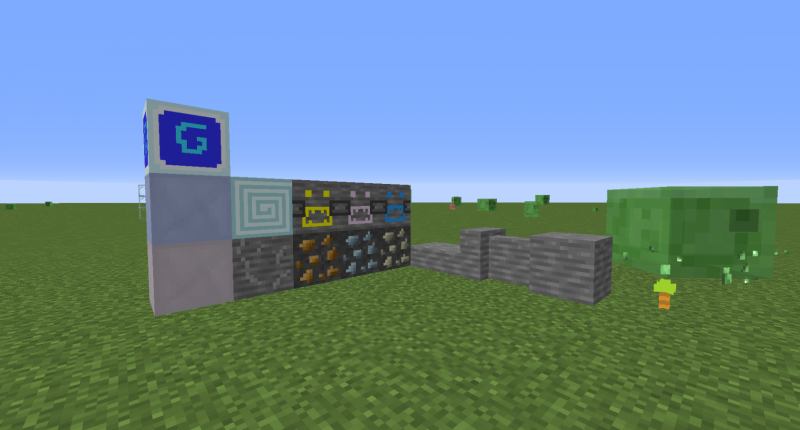 All blocks in V1 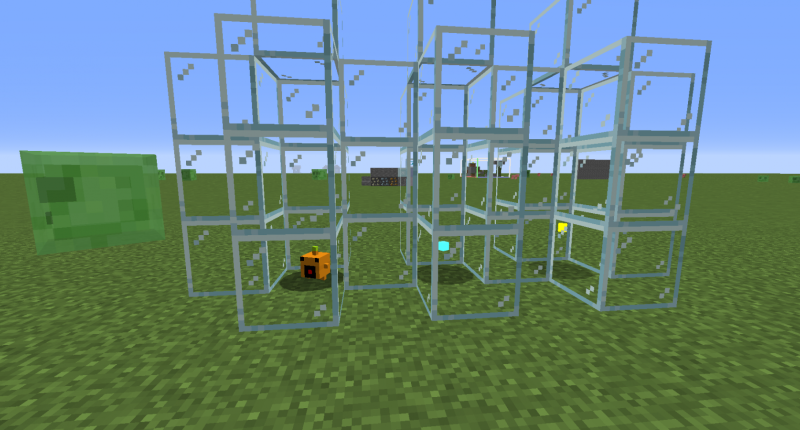 All mobs in V1 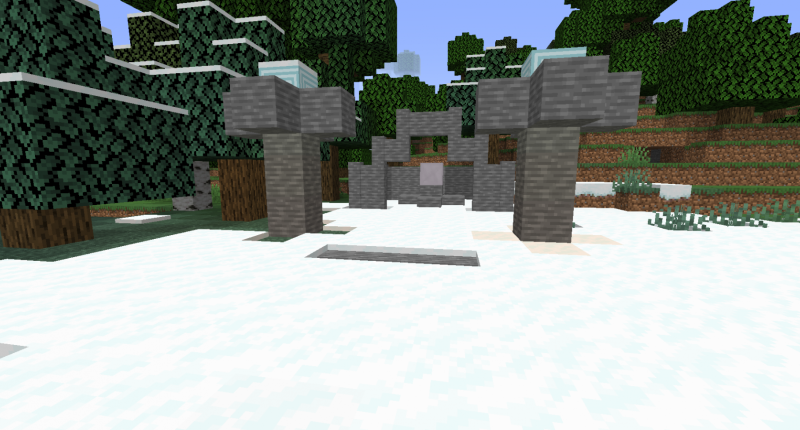 A partially berried shrine in a snowy biome

Welcome, one and all, to Keb's Majik Mod!

Hello and welcome to my best mod yet! It adds many magical objects to make your worlds more, well, magical. Note: Use JEI for recipies

Essence Ores: There are three types as of yet: Fire, Ice, and Thunder. They are fairly common and are found in every biome. They drop three of the corresponding essence. Needs iron or higher to mine.

Mythril Ore: Can be smelted into Mythril which is used for some magic objects. Needs diamond or higher to mine.

Deepstone: Not quite an ore, but it probably fits best here. It looks a lot like Stone, but the texture is the MCreator stone texture. It is found kinda deep in the ground, and has its own stairs, slab, and wall. Needs iron or higher to mine.

Mythril Block: A block made out of Mythril Ingots and glows. Needs diamond or higher to mine. Found in some Shrines.

Blue Mythril Block: A very expensive block made out of Blue Mythril Ingots and produces light. Needs diamond or higher to mine. Found in some Shrines.

Firefly Orb: A block with a light blue swirly-thingy inside and drops three Blue Firefly Bulbs. Uncraftable. Found in some Shrines.

Statues: Comes in three varieties: Gold, Mythril, and Blue Mythril. Drops three ingots of the corresponding material. Uncraftable. Needs iron or higher to mine. Found in some Shrines.

Deepstone stairs, slabs, and walls: Self explainable. Needs iron or higher to mine.

Mandrake (Plant): Spawns a Mandrake (Mob) when broken. They are found in forests and sunflower plains.

Mythril Ingot: An ingot from Mythril Ore. Used in making Rings and Blue Mythril, possibly other things I forgot.

Impure Mythril: A mix of Mythril and Lapis. Smelt to get a Blue Mythril Nugget.

Blue Mythril Ingot: A kinda expensive ingot, considering the fact that you're gonna need more than one stack of Lapis to make. Used in making Rings and Dead Extractors.

Mythril Nugget: A nugget... from Mythril. Used in making Rings.

Rings: Blank Rings are made out of a combination of nuggets and an ingot from either Gold, Mythril, or Blue Mythril. Then add an Essence to a Blank Ring. Gold and Mythril rings provide one effect depending on the essence, and Blue Mythril provides two effects. To use, hold in main hand.

Runestones: Blank Runestones are made with Stone and a Firefly Bulb, which you can then use in a Stonecutter to carve a rune on. Runes provide one or two effects, but need to be charged in a Crafting Table with a Blue Firefly Bulb before use. Using a Charged Runestone in Survival will convert it back into an uncharged Runestone.

Spheres: Empty Spheres are made with Radiant Shards and a Blue Firefly Bulb. You can then put one in a Crafting Table with a Phantom Membrane, Firefly Bulb, or Prismarine Shard to get a Sphere that can make you float, give you night vision, or breath under water. To use, hold in main hand.

Firefly: They spawn in plains and forests at night. They drop Firefly Bulbs.

Blue Firefly: They spawn in plains and forests at night, but are less common and spawn in smaller groups than normal Fireflies. They drop Blue Firefly Bulbs.

Mandrake (Mob): They spawn when a Mandrake (Plant) is broken, or from a Spawner in an Infested Shrine. They are fast, and two hits can kill you if you're unarmored, and they can knock you back a good amount of blocks. They currently make Ghast sounds. They drop Mandrake Roots.

Shrines: Made out of different Deepstone blocks with two pillars that have Radiant Glass at the top. The centerpiece varies from a Gold Block, Mythril Block, Blue Mythril Block, Statue, and Firefly Orb. They are found all throughout the Overworld, and can sometimes be berried partially.

Infested Shrine: A ruined Shrine that has Mandrakes growing around it. The centerpiece has been replaced with a Mandrake Spawner. There are a few Blue Mythril Blocks hidden under a dirt mound. They are fairly rare and are only found in forests and sunflower plains.

Creatures that you can grow and help you depending on the variety.

Enjoy, and look out for possible updates!

Really cool mod! I'd say improve the textures and add some polish and you'd have yourself an amazing product!

Very cool! I agree that the textures could use a bit of work... maybe add in some shading and outlines and that should really help. Items in Vanilla usually have a pretty cartoony outline to them. The blocks look really nice they just need a bit of shading to add some depth to them. Also I'd recommend turning off the search bar in the creative tab, unless your mod is HUGE it actually makes finding items a bit more tedious as the search bar overrides the Vanilla search bar, plus JEI is probably how much people will search through your mod anyway.

I plan on a polishing/texture fixing update. Possibly mix it with the next one?