Im very grateful for over 2,000,000 downloads (on Curseforge), thank you! But sadly I lost the original mod files...

The legacy will continue with the remake.  Click here to learn more.

Undead Expansion is a work in progress mod for Forge aiming to expand undead creatures and not only undead ones in a way that does not ruin the "vanilla" experience. The mod just got remade from a scratch (mainly because of my mind changes and MANY bugs)! There's less content than before but more fresh and detailed. It's still not finished and just I want to let you play with currently refreshed features I made for this mod. Version 1.16.5 will no longer get updates (constantly switching mod workspace versions from 1.16.5 to 1.18.2 is pretty risky and bugs can appear very often, so I decided to support 1.18.2 only as for now)! Always make sure that you download the LATEST mod version! 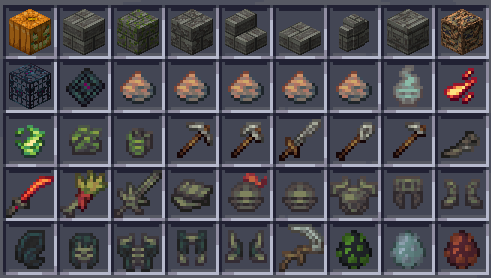 A brief look into some of the  features (note that it only applies to content from versions 2.0.1 and above! If there's a feature that is mentioned below and isn't available in game, the new file/s are most likely being processed, wait a bit):

In order to get started with creating your own mob spawner (currently 5 mobs supported: zombie, skeleton, enderman, creeper) you'll need:

- Monster Ashes -  a new item dropped by Zombies, Creepers, Skeletons, Endermen and Spiders rarely if they burned to death. Try to seek for the ashes at dawn when most undead creatures begin to burn! Enchanting your weapon with Fire Aspect will work even better. You will need 4 ashes of a specific mob type to make one functional spawner.

- Ectoplasm - an item dropped by Haunters.

- Spawner shards - now conquering dangerous dungeons has an extra reward - spawner shards! Breaking a monster spawner will now give you a shard. Combine 4 of them with some other items in a crafting table to get a Hollow Spawner block.

After you put every ingredient in their respectable slot, close the GUI and sneak-right-click the spawner with Ectoplasm to activate it!

- Revenant - spawns similar to phantoms, if a player didn't sleep for several nights. At first you will notice only a pair of glowing green eyes floating following you which can make it harder to spot a Revenant also making the encounter slightly more scary. After being damaged or when it attacks an enemy it becomes visible showing itself. If you aren't lucky and get hit by an invisible one you will get Death Blight effect which makes you rapidly lose health but for a very short time. They also won't burn at sunlight. But if exposed to sunlight they won't be invisible until they find a dark place. They drop: always Bones, Blighted Remains 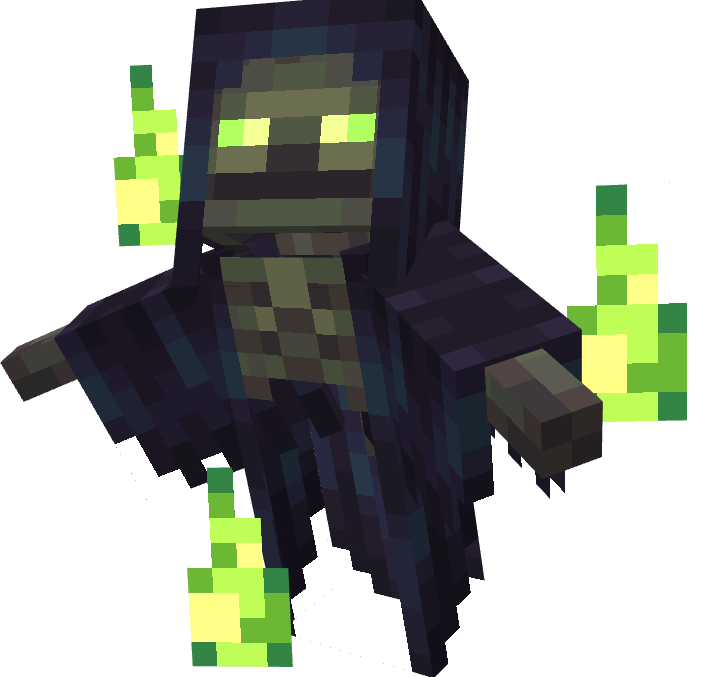 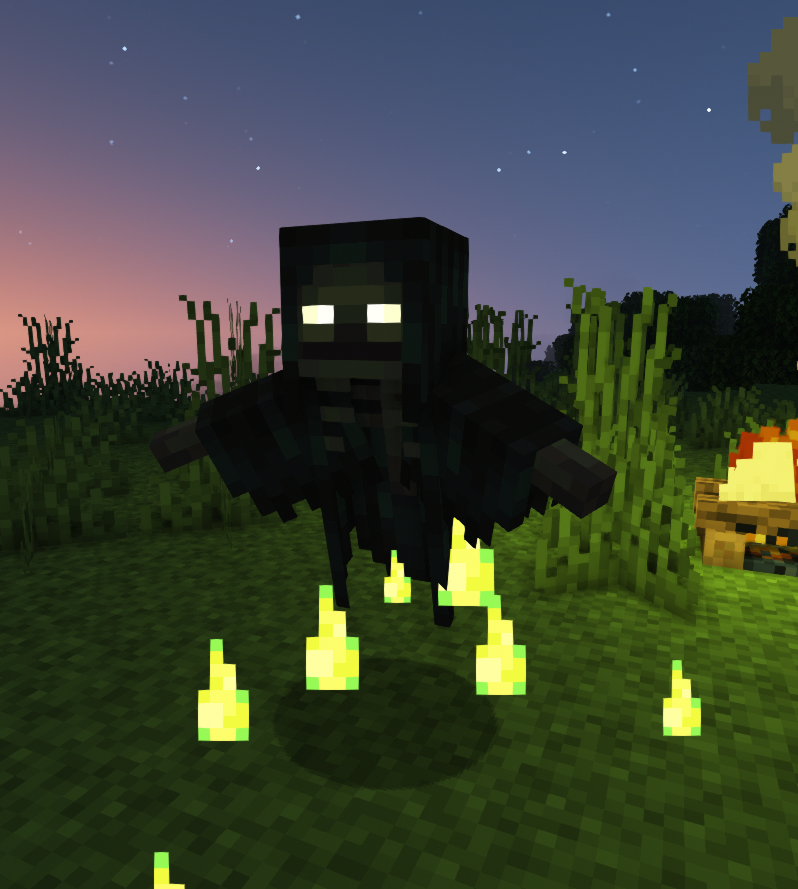 - Demon - a fiendish creature living in the Nether. Immune to fire and knockback. Taller than a player. Hits hard with great knockback making him dangerous near pools of lava. Can heal itself after hurting it's target. Can set attacker on fire for a short time. Drops: Nether Wart, Embers. 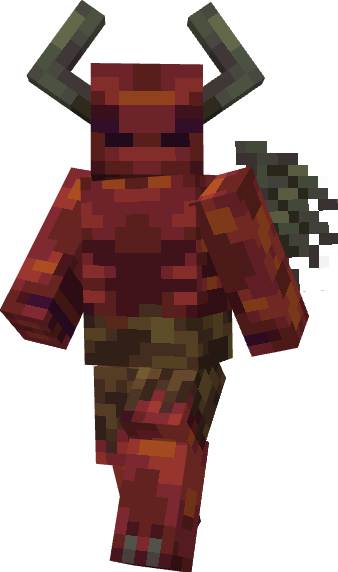 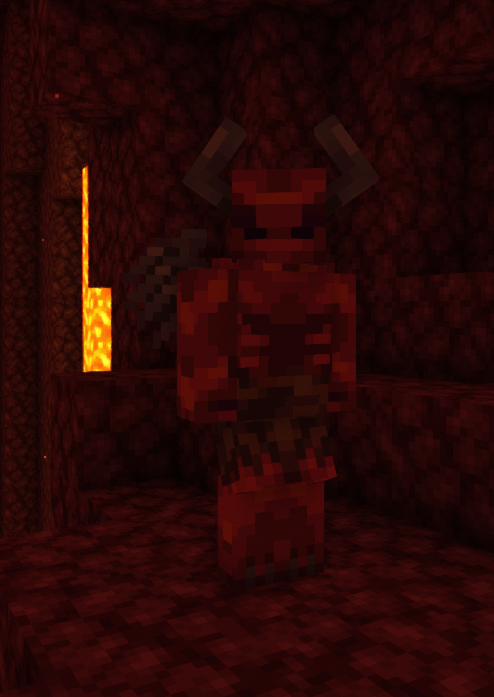 - Wandering Knight - a tough armored humanoid enemy. Immune to knockback. Has a rusty sword but can hit pretty hard. Spawns from spawners in lost chamber dungeons. Drops: Fractured Plating, occasionally a part of their equipment.

- Wandering Knight Leader - an even tougher, stronger version of the Wandering Knight. Is required to be alive to Wandering Knights to spawn. Spawns only an underground dungeon! Has more health and damage. Can summon Evoker Fangs under attacker's feet when the knight gets hurt of slashes it with his Fang Sword. Acts kind of like a miniboss. Don't even think about building up 2 blocks an an easy victory... he's smart enough to not fall for that cheap trick! Drops: Fractured Plating, occasionally a part of their equipment. 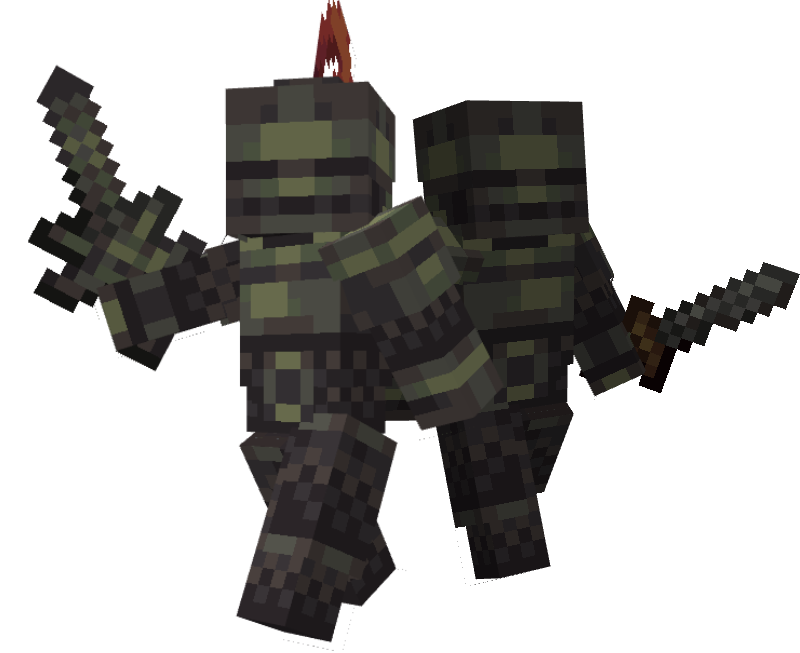 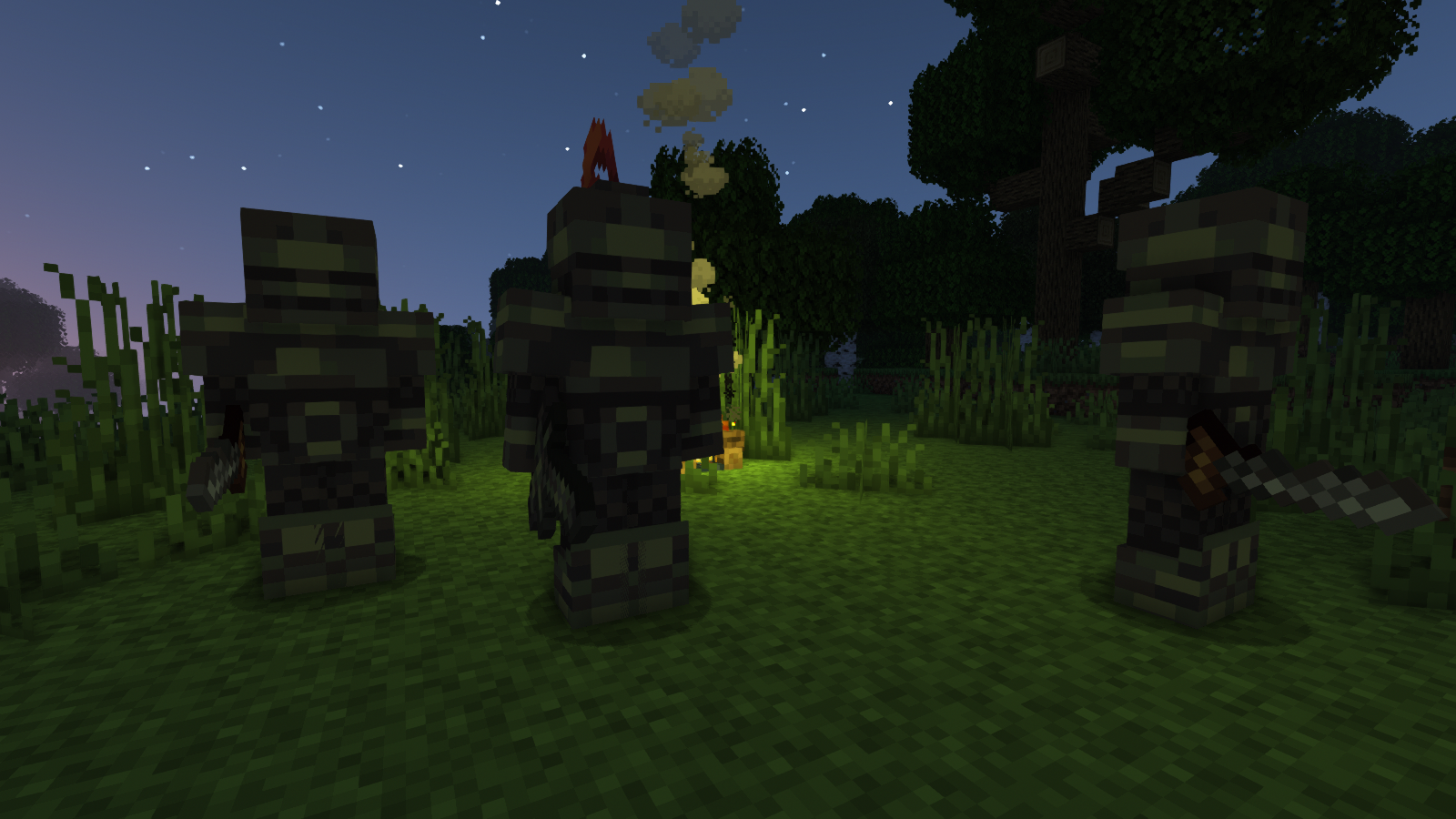 - Haunter - an angry spirit can leave it's body after death! Spawns rarely in the place of death of a non undead monster mob at night. Is quick and can Blind it's target. Drops: Ectoplasm. 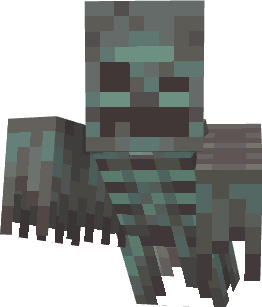 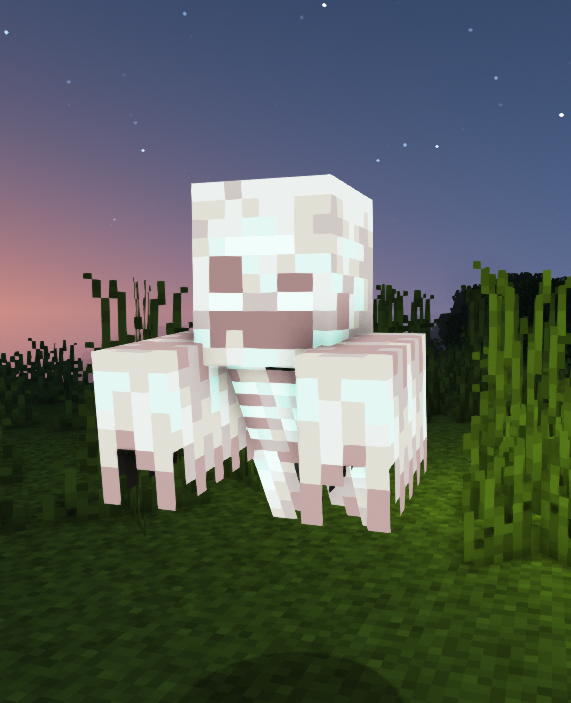 - Grave - appears in Plains, Savannah or Forests. Generates a unique block - Grave Soil. Breaking it with a shovel can give you xp and some decent loot (bones, gold/iron nuggets, rusty tools etc.), but at night you can get some better stuff (sometimes: diamonds, Blighted Remains, Rotting Arm). But pillaging a grave is something only bad guys would do. If you destroy someones burial place at night, the spirit can get upset and a Haunter may spawn! Higher risk, higher reward :P 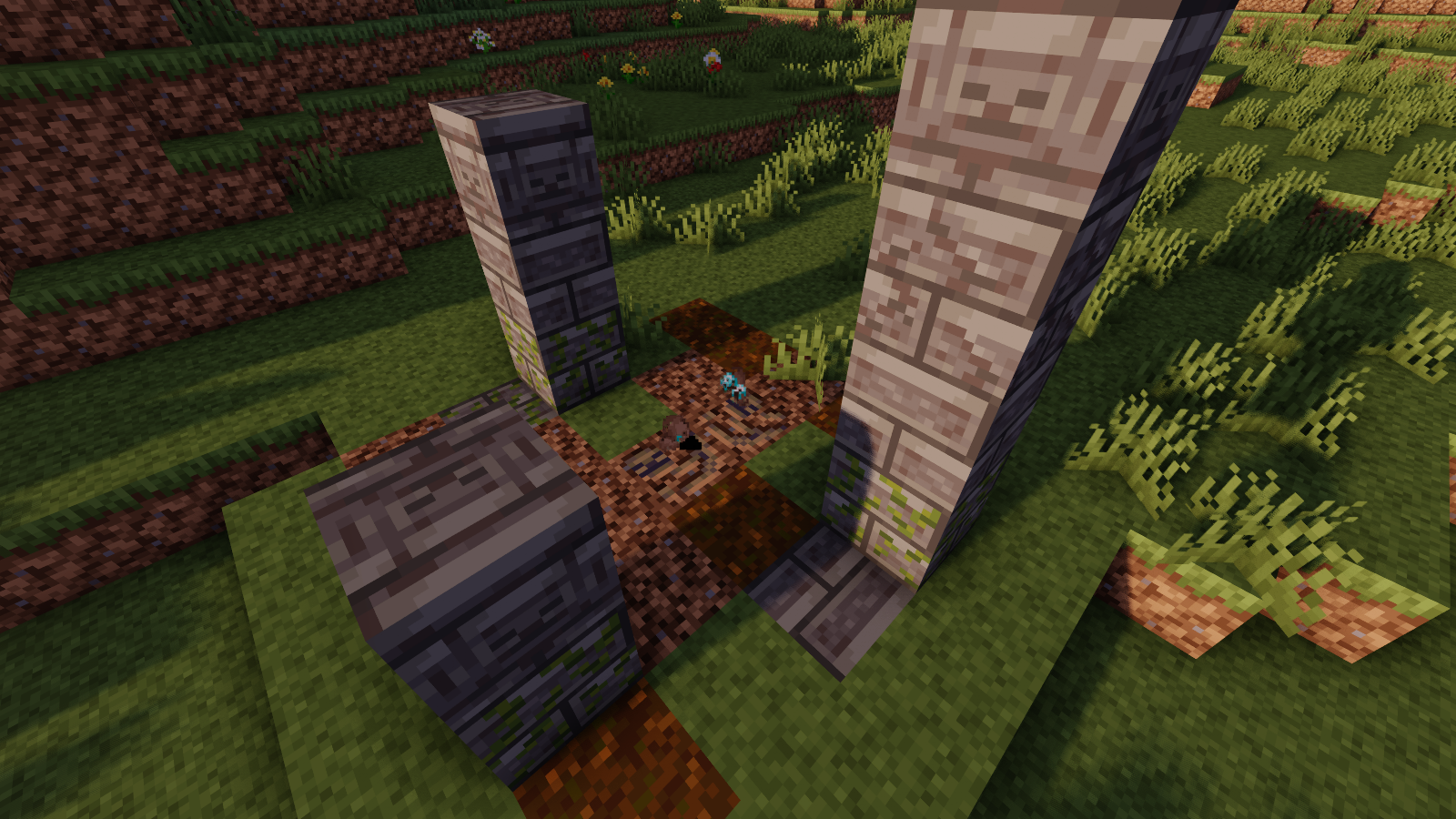 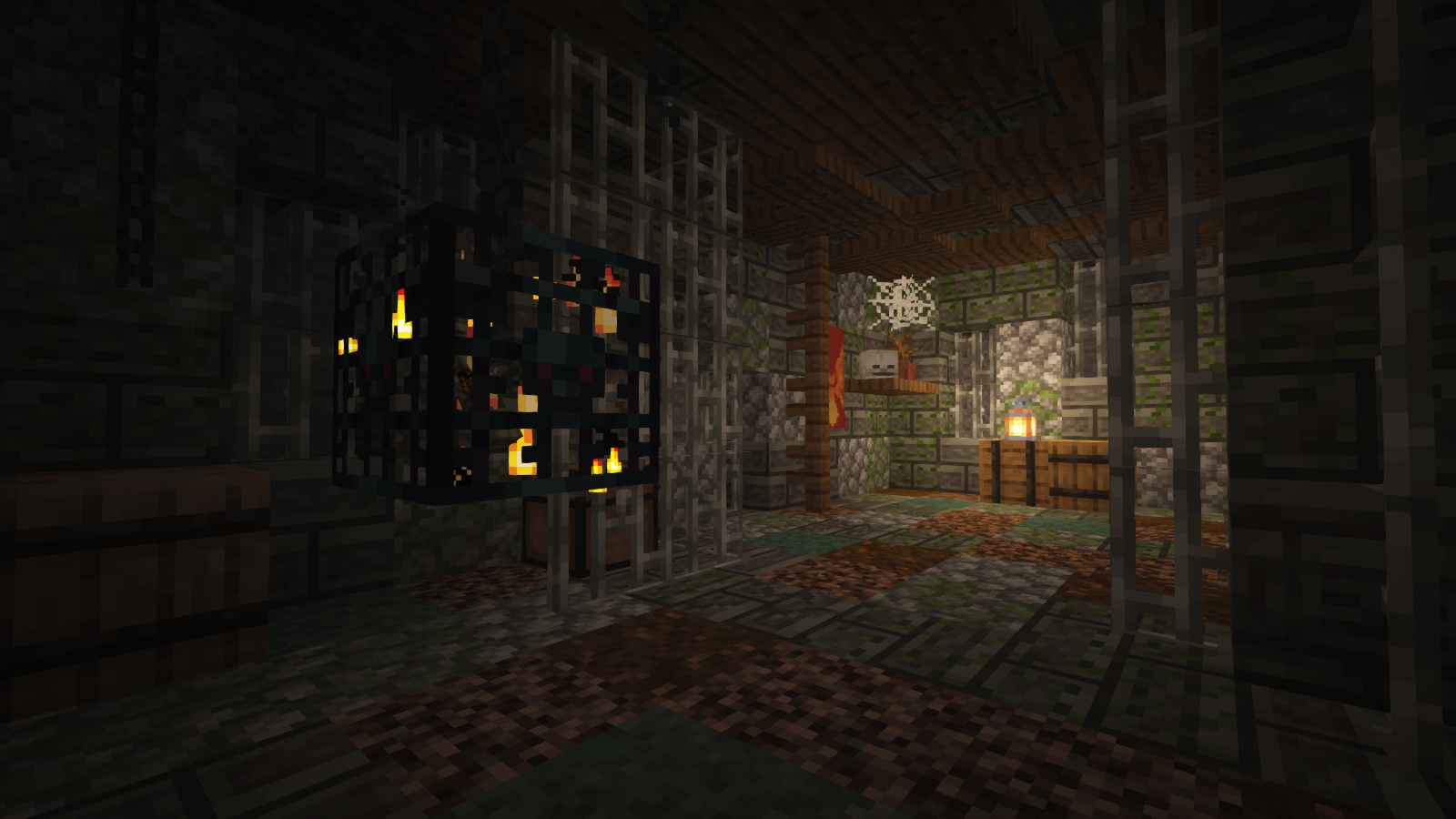 Other items, gear/equipment worth mentioning:

- Rotting Arm - an arm of a Zombie chopped down when killing it as an uncommon drop. A decent early weapon .Acts like a sword with higher attack speed and damage comparable to a stone sword but with ability to Slow down and cause Nausea to your foes. Can also be used to craft 4 Bones. Is a reference to Terraria (Zombie Arm). [Uncraftable]

- Creeper Husk - dropped by hurting a Creeper with a sharp tool like a sword or an axe. Currently used to craft Impact Grenades. [Uncraftable]

- Rusty Tools - most commonly found wielded by skeletons instead of Bows. Kinda pointless but these look cool and can be upgraded into Iron Tools with a single Iron Ingot in basic crafting! [Uncraftable]

- Fang Sword - a weapon wielded sometimes by Fractured Knight Leaders. Hitting an enemy gives them Mark of Evil effect which can cause Evoker Fangs spawning under their feet over time. If you are lucky, the Leaders can drop it after their death. If it's too damaged, repair it with Fractured Plating using an Anvil. [Uncraftable]

- Grave Scythe - a slow but hard hitting tool which can make regular mobs other than Haunters drop Ectoplasm too! [Craftable]

- Wandering Knight armor - armor worn by Wandering Knights. Has an extra helmet variant which can only be obtained through slaying a Wandering Knight Leader. Little more defense than Iron and less than Diamond or Netherite. Has a set bonus which gives you Knight's Resolve effect - after taking damage from any source you have chance to get a Resistance effect. [Craftable]

- Deathbringer armor - made mainly from Revenants' dropped items - provides Death's Hand buff which makes you immune to Death Blight and makes you occasionally inflict it on your enemies. [Craftable]

- High-Frequency Murasama Blade - upgrade a Netherite Sword with Gun-Trigger Sheath in a smithing table  to obtain it. Has a special AoE ability (only works if off hand is empty!). It's an obvious and direct reference to Metal Gear Rising Revengeance. [Craftable]

If you have trouble with crafting, use Just Enough Items!

There are jus a few at the moment but there will be more! Here's a quick example of one, discover the rest yourself! 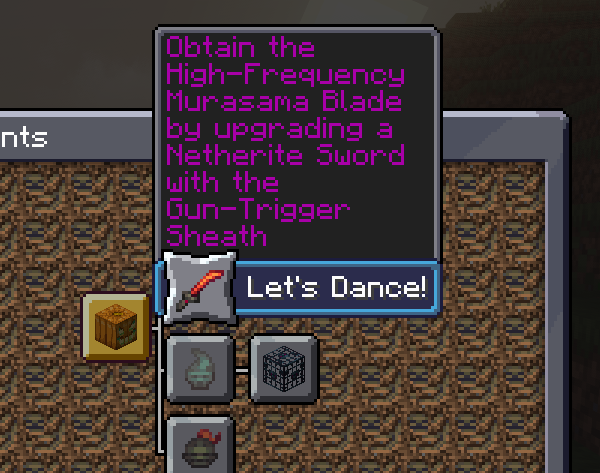 - a Discord Server (not anytime soon sadly, I have no time to manage the server all day everyday, I have a real life too!),

- Share your thoughts! Let me know what would you like to see in the mod and I will consider adding your ideas.

Every single bug you see there will be fixed at some point. Let me know if anything else is wrong!

Allowed me to make this mod

A: Sooner or later there will be. Not sure when though.

Q:Can I use it in modpacks?

Q:Can I repost this mod?

I BEG YOU! PLEASE, DO NOT REPORT BUGS RELATED TO OLD VERSIONS OF THE MOD (EVERYTHING BELOW 2.0.0). IT'S TIME TO SWITCH TO THE LATEST ONES :D

-Mod remade FROM A SCRATCH. More to come, enjoy what is currently ine the mod :)

- Added new weapon: H-F Murasama Blade. There will be bloodshed!

- Slightly reworked demon mob as well as it's loot table,

- made Ectoplasm and Ashes stackable,

- fixed custom mob spawners not spawning mobs in some cases.

Textures and GUI design here are simply amazing * . * what an awesome potential I see here! I also really love how much more vanilla themed it seems from ArcaneCraft, it fits much better my aesthetic needs, haha

Thanks! I worked really hard on it

Really nice mod, the textures and models are really good, I think I should remake a lot of my mod lol, because I'm seeing a lot of really amazing mods, this is one of the best mods I've seen.

Thanks for Such kind words! I really appreciate that

omg new mod by Fredzik!!! looks really cool; something tells me this'll prolly be my favorite mod from you, ArcaneCraft II coming in at second X)
textures and all look amazing too. really great job! <3

Thanks! By the way the textures have (I think) improved much in Undead Expansion when in AC textures weren't that great (I mean very gradienty and pretty bad colors on some of them). I'm glad you like this one :)

Wow! this is amazing! can i write music disc for your mod if u want :)

Thanks! For now I dont plan any music disc but if I change my mind I think you'll be able to ;)

these textures makes mines looks like of a 3-year old in comparison, keep up with the good stuff :D