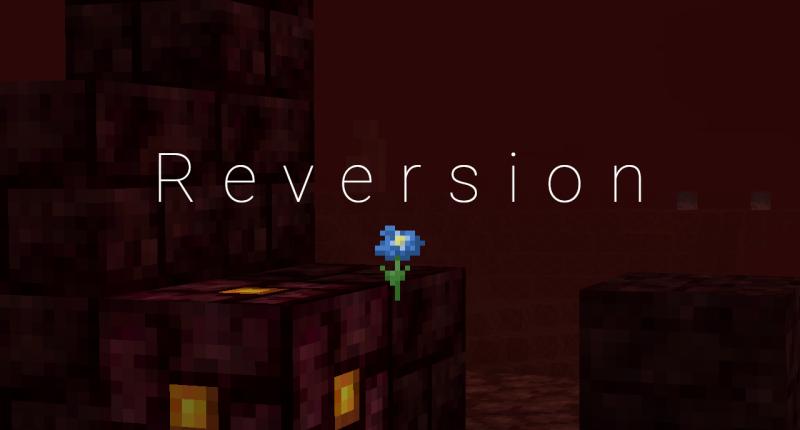 Reversion is a mod in replacement for my prior mod Immersion. It expands upon the idea of Immersion to bring with it the same philosophies that Mojang would use when adding new features into the game. The plan is to add more blocks to the total build palette, adding more variation to builds, and add some more depth to various features of the game. Explore a refined nether with new mobs, blocks, and items, added trays for which you can grow rice & soulbead, new food & new workstations to use to enhance the vanilla experience. Find new variations of blocks to build your favourite new buildings.

The goal was to expand on various parts of the vanilla game to make everything much more alive & unique, as such the main focus has been making the nether as livable & as bountiful as the overworld - in future I plan to continue adding things to all facets of the game, including the end!
As of v0.001.0043 there is a workstation for fermentation, a sizable chunk of foods, unique concepts when it comes to agriculture such as the tray or felling, over 100 different blocks & their variants, a new wither-mob, and everything is added in a way that follows Mojang's own philosophies.

There is even a small amount of hidden lore!

I hope you enjoy the mod, feel free to leave suggestions, bug reports, or other things on the attached forum page!

It is recommended you play with both JEI & Polymorph to get the recipes, aswell as prevent mod conflicts

The mod also features a gamerule to give you all the recipes, by default this is on

It looks even more awesome than Immersion * . * good luck with developing it!

Thank you :D, Update 0.000.0002 will be out shortly, adding new wood blocks, and fixing almost all of the bugs

Releasing a hotfix for 0002 as I had forgotten to fix the recipes for the stonecutter, as a treat enjoy some new Limestone textures & blocks!

The first major update/release of Reversion is out now with over 400 new mod elements! featuring major expansions of the Nether, another new Wood type, aswell as several new foods. And the very first new mob of the mod, the Witherhog!
It also includes lots of new blocks to balance out the build palette, and the first workstation of the mod; the fermenting barrel - used to make Cheese!

Be sure to send suggestions on the linked forum page!

Released Version 0.001.0043 which fixes some of the smaller issues such as certain Soulstone variants falling to gravity, and increases the health & damage of the Witherhog, making it much more of a threat; and fixing the saturation values of all the foods.