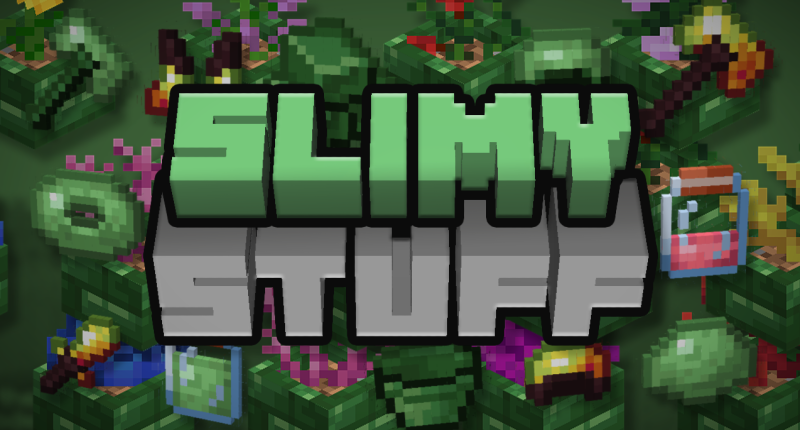 The "Slimy Stuff" mod adds several new utilities to slime, jelly, armor with sticky abilities, weapons that will not please the surrounding creatures ! This is a remake of one of my old mods and I hope you will like it, This mod was created with the Mcreator tool.

Sweet Slime and Caramelized Slime :
This mod adds a new source of food, and will be used to do many things.

Armor, Weapons and Effect : It also adds a slimy armor, this armor allows access to new effect! The helmet allows to have the "Sticky" effect which allows the player to hang under the blocks. The boots allow you to have the "Bouncing" effect which allows the player to bounce off any surface as if you were on slime. The player will have a jump boost effect if they have full armor

This armor has a "magma" variant, it has more durability and has the same effects in addition to a new one, the "Fire Aura" effect which deals damage to the entity around the player.

There are new weapons of which the Slimy Dagger and the Slimy Hammer, the dagger allows to attract the enemies towards you, and the hammer allows on the contrary, to push them.
If you are fed up with the classic Minecraft shield, you can make yourself a Viscous Shield which has the same utility as the base one but can be upgraded with a slime block so that it can send projectiles back to enemies, or to send back the enemies themselves.

They have their "Magma" variant too, they have more durability and set enemies on fire in addition to basic abilities.

With the Caramelized Slime you can make nice building blocks with its variations in stairs, slabs...

It's not the only thing you can do with it, you can make a bigger version of the basic flower pot, a Jug. In this jug you can put double plants such as roses, lilacs... but also corals (only in water).

The Slime Bump is a very bouncy block, when you get close to it, it will kick you out. The Slime Puddle is a reduced and less expensive version of the slime blocks for those who want it just for that bouncing utility.

With the Sweet Slime you can make jam, but if you are brave you can eat Slime straight and make suspicious mixes out of it.

You can put this mod in your modpack.

Underrated mod, this need to be popular, textures are incredible
Upvote
Also post it in Mod of the week, you have chances
And: sorry for my bad english

Yeah man, this is a candidat for MotW

You Know its a good mod when it has more upvotes than downloads.

Congratulations for winning Mod of the Week :)
I love the way you executed slime equipment. While there may be plenty "slime expansion" mods, this one really does stand out :D

congratulations on getting MotW

How did you make the shields?

For the shield I just took a "ranged item" as animation I put "block" and then as a condition for it to be used I put "if the itemstack is grass ", an impossible condition