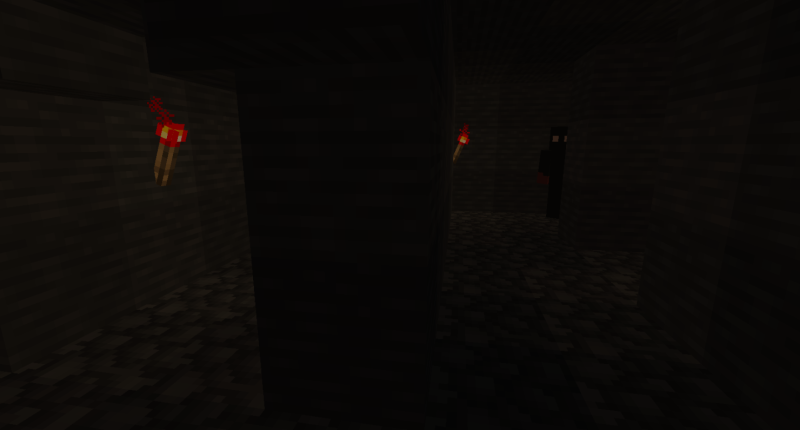 Inside a structure in the mod 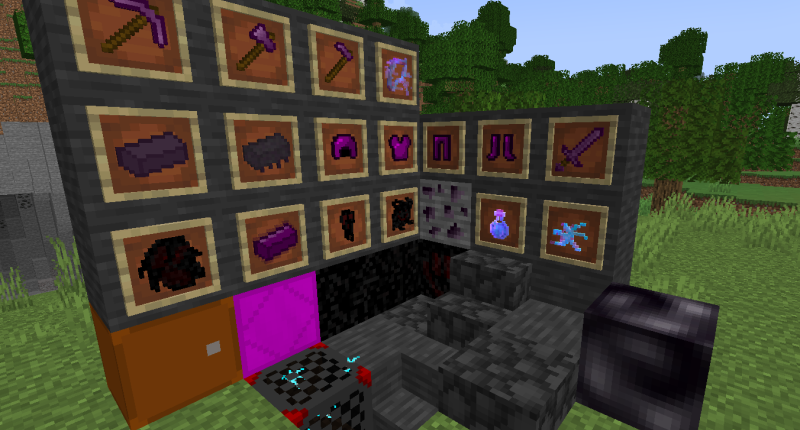 Items in the mod 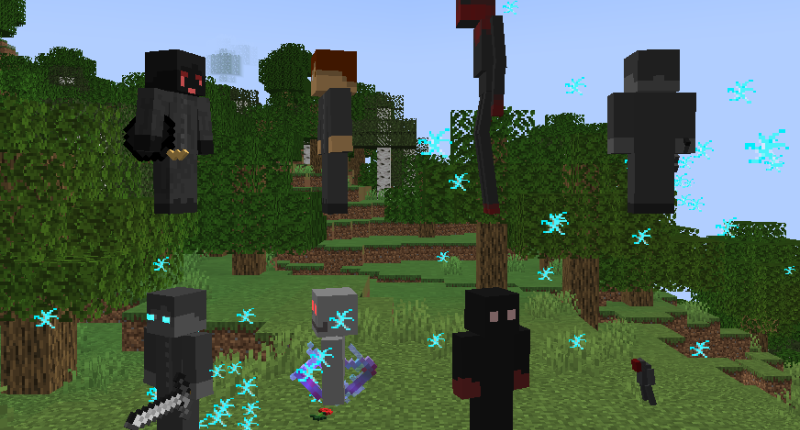 Mobs in the mod

Corruption is one of the main things in this mod.

Soul corruption is an item you get after killing a stalker (More on that mob later). You can use this item to craft A corrupted soul in a smithing table with a Dark forest soul.

Corrupted soul is an item you get after using  soul corruption + dark forest soul in a smithing table. This item is used for crafting a Corrupted soul block.

A corrupted soul block is a block you use to summon the final boss of the mod. You simply place the block in a dark forest dimension and rick click it to summon the boss. If used in a different dimension, It wont work and will play a beacon deactivated sound.

A corrupted traveler is the final boss of the mod. It has 500 health and throws bombs. It floats in the air all the time. These bombs are highly explosive and very dangerous. They make a big explosion so it would be great to fight this far away from your base (if your base is in the dark forest dimension ofcourse) The boss drops a Corruption block.

Shynol ore is an ore that will only spawn in a dark forest dimension. It drops raw shynol ingots and can only be broken with a netherite pickaxe.

A shyndol ingot can be crafted with 4 shynol ingots and 4 diamonds. You can use a smithing table to make shyndol armor or shyndol tools. (You can also use 9 shyndol ingots to make a shyndol block).

Shyndol armor is a way better version of netherite armor.

Electricity is basicly used for all crafting recipes within the lightning family.

A lightning block is a redstone based block that if redstone is powering it, It will make a lightning strike hit the block. You need 1 electricity in the center, 1 iron block in the left center, right center, upper center, lower center, 1 redstone dust each in every corner.

The lightning killer is a powerful mob that spawns in the dark forest dimension. They are peaceful until you hurt them. If you touch a lightning killer, A lightning strike will hit you. Electricity particles do also spawn around the mob.

Lightning potions are potions that if you get the effect, a lightning strike will hit you. Its an instant effect so dont worry about lightning strikes hitting you every second. Tipped lightning arrows do nothing.

Structures and mobs within them

A fort is a structure that spawns in the overword. There will be a giant wall with a little house in the center. The walls are made out of reinforced obsidian. 4 spawners will be placed on each corner of the walls. These spawners will spawn seekers if you find it at night. There will be chests in the small house containing diamonds, Disks, Dark stone, iron, nametags, and dark forest souls. The small house is made out of dark stone.

The seeker is a small mob that will spawn in the dark forest dimension and in the fort. They float around and are hostile against the player. They drop 1 wither rose and deals 6 damage. They are very small and hard to hit.

A dark forest soul can be found within forts and mazes. They light up the portal to the dark forest dimension aswell is apart of the corrupted soul recipe.

The dark follower is a mob that can spawn in mazes, and in the dark forest dimension. They arent that strong and drops alot of xp.

If you are fighting a stalker, then be really prepared, because this beast does 10 damage, has 150 health, and is super fast. Its tall so its weakness is small places. It drops Soul corruption and you have to kill one if you want to progress further to beating the mod.

The camp is a small structure that can only spawn in dark forests. They will spawn with a camp fire, chests, and a lonely traveler. The chests can contain stuff like, cooked salmon, diamonds, poppys, iron, and coal.

A lonely traveler is a mob that will kill a stalker, Dark follower, Seeker, and a thunder ghost. If you hurt it then it will try and kill you too. If the mob is struck by lightning, then it will turn into a lightning killer.

A dark plains biome is basicly the same as the dark forest biome, the difference being that there are no trees, camps dont spawn, and only mazes spawn there. Dark plains are really rare but important if you want to try and beat the mod.

A dark forest dimension is a really dangerous place. To make the portal you basicly have to place dark stone in the same order as obsidian in a nether portal. Use a dark forest soul to light up the portal and enter the dimension. There is no light source in the dimension, so upon entering you will need to place torches yourself if you want to see anything.

Reinforced obsidian is a block that can be found around forts and in chests at mazes. It has a hardness of 100 and resistance of 2000. You can only break them with a netherite pickaxe so its best to just find them in chests. The sounds for it is the same as sculk sensors

A storage box is a container with 54 slots. You can find them at forts and make them by doing the same recipe as barrels, but adding a chest in the middle.

If true, a lightning killer brute will fire a lightning strike onto you if you touch it. If its set to false then it wont. The default setting is true.

he was the villain from the start

Why gotta serve it raw!

Place down a corruption block