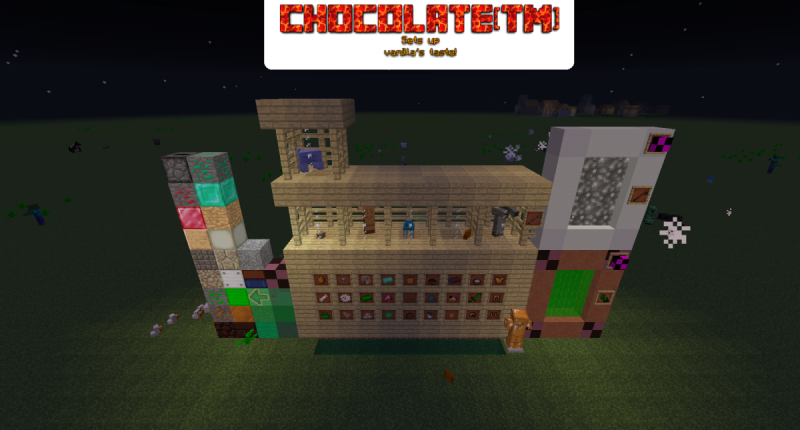 Chocolate™ 1.0 has been released!

Once upon a time, after the defeat of the Ender Dragon and the Wither, new dangers have been discovered... You are now set on adventure, to defeat the ??? and save Minecraft's world!

A sweet twist to Vanilla, with a top cherry to enjoy!

What this Mod will include in the future?

I know its mean't to be hidden, but:

Onare is a gem found in the overworld and can be used to craft a block of it and armor.

Nautilus spawn in beaches and try to fill the emptiness there. They drop their shells.

Neotal has a bigger use than Onare. It can be used for a better-than-diamond-sword sword, a block, Flint and Neosteel, and it even has an infected zombie!

Elder Prismarine is crafted with a edgeless circle of Quartz circling normal Prismarine. It can be crafted into all types of Prismarine stuff, but i think i forgot to make a recipe for Elder Prismarine Shards and more :|

Aquagold and Bloomond are simple useless-but-cool gems that can be used for blocks. Armor and Sword coming soon?

Jellyfish might look passive, but they zap you when you're close to them. Use a bow to defeat them for... Nothing.

Swooping Weed is NOT another of these weed memes, its a simple grass that looks like kelp and swings in the wild.

Polluted Water is currently creative-only, but in 1.1 it will appear somewhere. It gives you a reason to burf when you're in it.

Emerald Green is a new dye, that is made with green and light blue dyes anywhere in the table. It can be used for normal dye stuff.

Fish Seeds are also useless and are creative-only. Why did i implement them?

Squirrels are annoying and noisy. However they drop nuts so that is good. Just don't click them...

Coconut is loved to be collected by wumpus Frost Pigs.

Byro Stone is a rather fancy stone variant that can be crafted into a polished variant.

The Cracker is a machine used for cracking stuff and getting leftovers that do nothing. Recipe: (CS = Cobblestone, PSTN = Piston, CRCR = Cracker)

The Neoworld used to be a world of happiness before the "creature" ruined it by corrupting it. Now it is known as the Corrupted Mesa.

Classic Zombies are simply zombies with a fancy cartoon cane and a monochrome world behind them. Some say you can find them in a monochrome dimension full of them... And somehow they started to appear in Desert Hills.

Classic Canes are simple canes that can be dropped by classic zombies. They can be netherified using a edgeless circle of Magma Blocks (top and down) and Lava Buckets (sides) with the cane in the middle.

Frost Pigs are found on ice biomes and jungles. That is how they have coconuts.

We have a discord! Here is the invite: https://discord.gg/WP8MV9V

Q: Do you have discord?

A: Yes we do! Click the link above to go to it!

A: niskiENDERMAN from Geometry Dash and this web.

Q: Will there be more dyes?

Q: What mods you recommend to use with this?

A: Is this a FaQ or an Uganda Knuckles fanon meeting?

A: No. I am one of the people in the #StopModReposting (thus if you dare to repost it or credit it as yours i will DMCA u)

1.0 - The Update that Changes Everything

Now it will be the release. Get ready, guys!

Nice work buddy, had a question for you? Did you figure out how to get upper slabs to work?

Do you profile picture is a Probe from terraria?

No, it's from Geometry Dash

It will come tomorrow after the Sma5h Direct

(forgotten to post it)
The buddy of Raolcraft is coming tomorrow!
:D

1.0 IS SMASHING TO MINECRAFT!

1.1 with vanilla biome improving and more
also fast info the update wont be another from chocolate 1.0(.1)