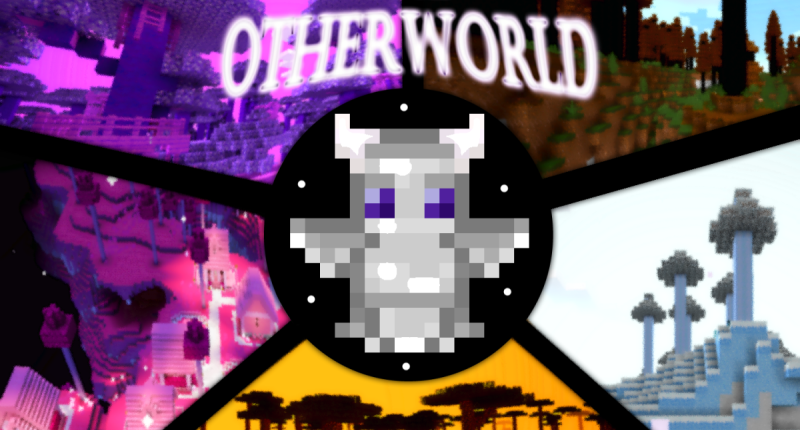 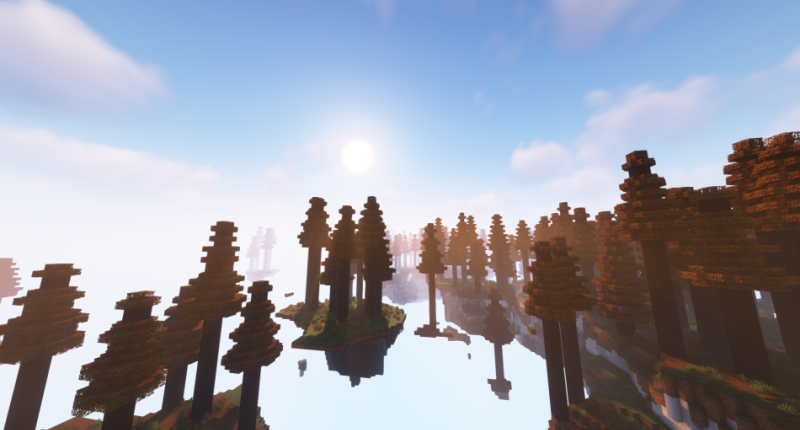 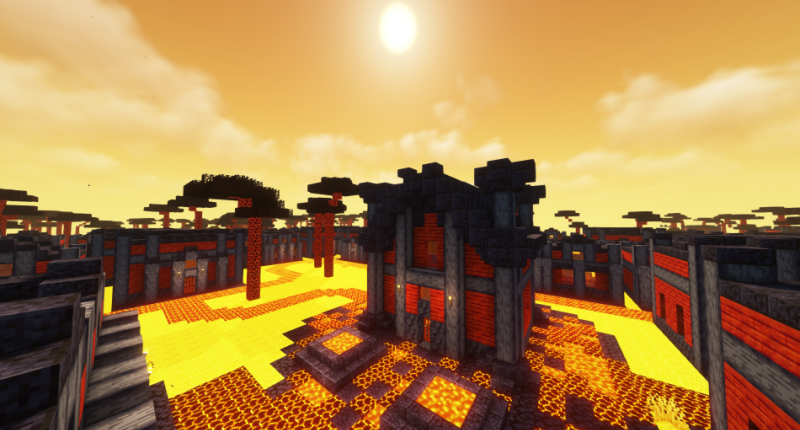 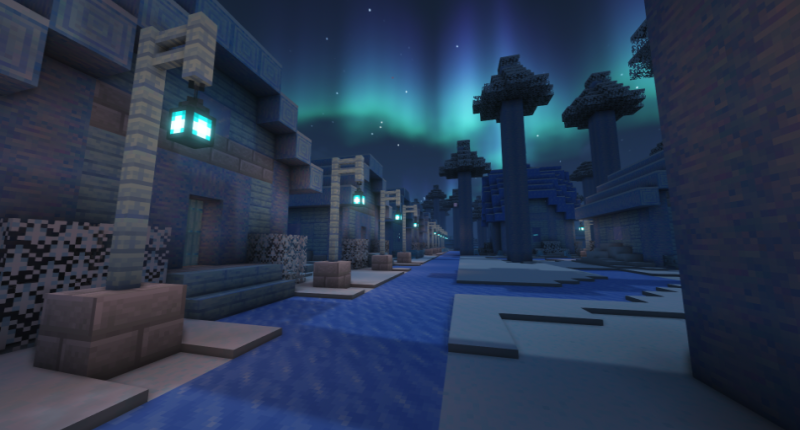 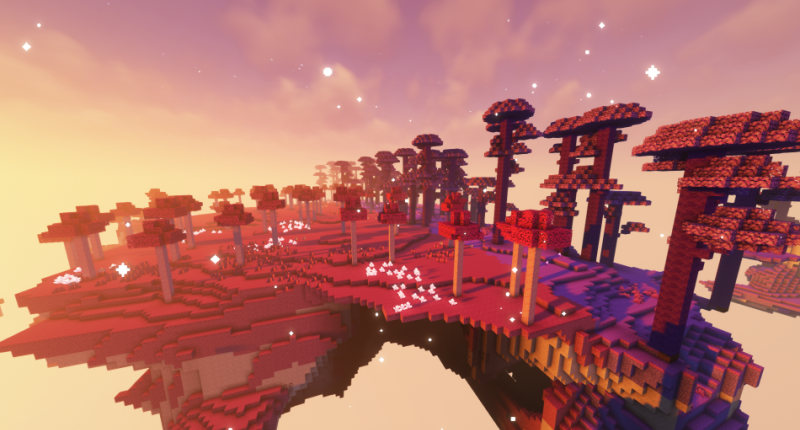 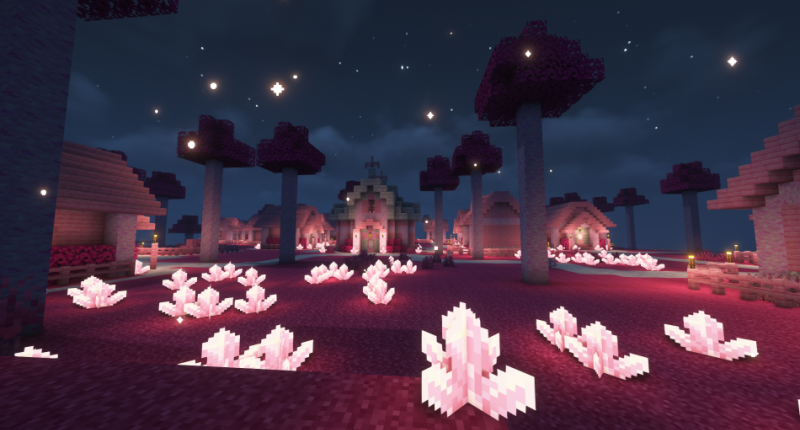 Check out the Wiki for more information!

The latest version contains major bug fixes for the Alpha version, and adds cool new features! Make sure to download it if you downloaded the Alpha!

Each race is unique. They have their own biomes, their own towns, and their own personalities! 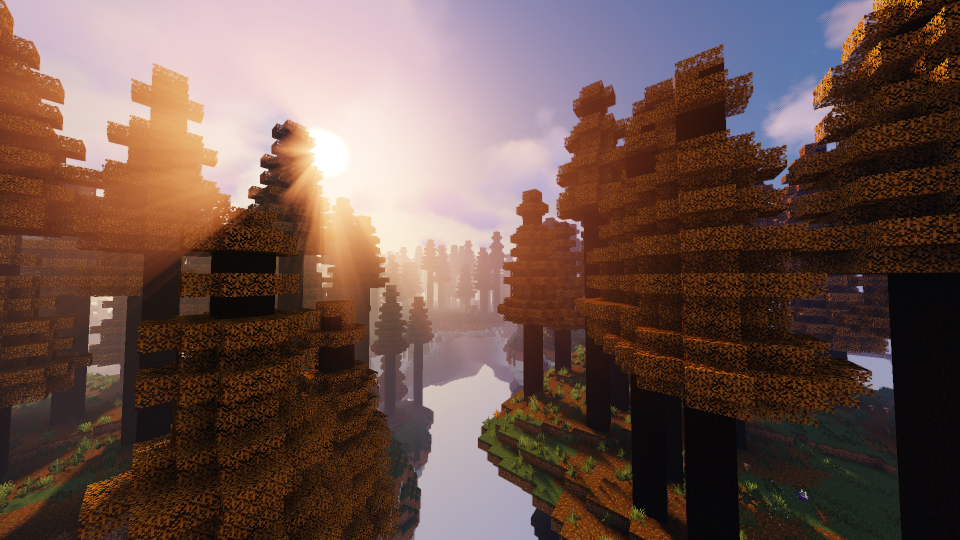 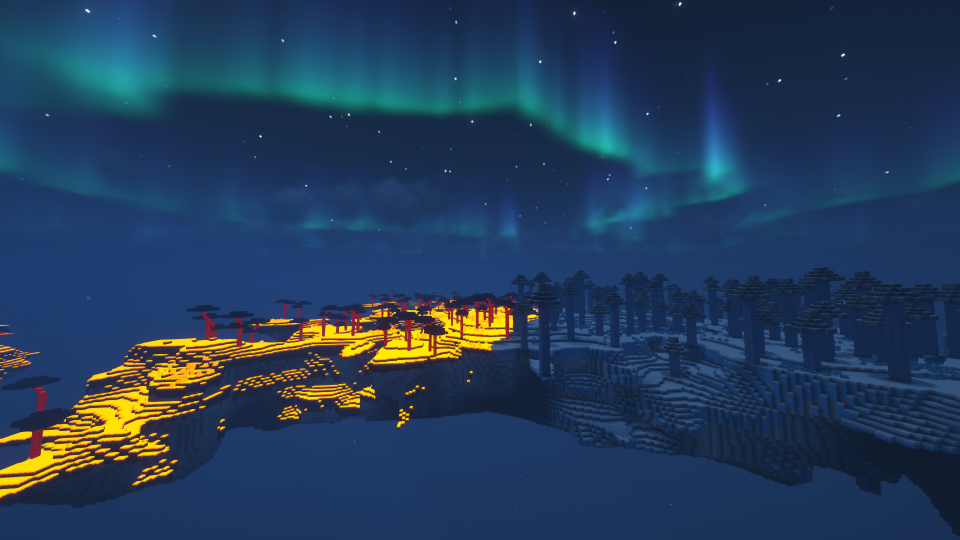 The Otherworld is a dimension consisting entirely of floating chunks of land, each one completely alien to one one-another. There is an icy biome named Glaceia, a fiery biome called Emberia, Magical biomes like Enchantia and Roseia, and a giant forest called the Deepwoods. They consist of their own special dirt, grass, trees, and sky, made up of pearly-white stone called Otherstone.

This dimension is rather treacherous to navigate, because there is nothing but a dark void below these islands, Be careful mining here!

When you start your game, you have a choice to be either human, or to be an Otheran. If you choose to be a different race, you will be teleported to a town in the Otherworld that matches your race. (As of the latest version, you can change this by going into the mod's config file) These towns are naturally spawning, just like the villages in the Overworld, and they contain their own townspeople that you can interact and trade with. 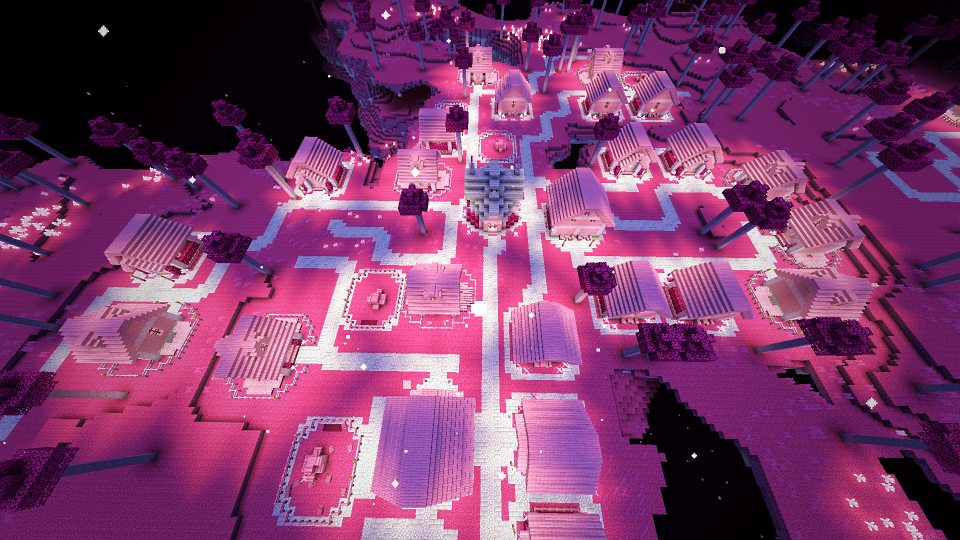 Right clicking on a townsfolk will start a dialogue with them. Depending on your relationship, they will either be friendly, neutral, or hostile. They will remember you, so be careful if you like punching people! 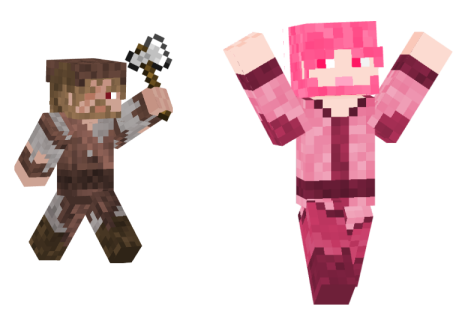 (Some of the dialogue is unfinished, and is still being developed)

Certain items will trigger a trade screen, where you can buy or sell. Each race has their own currency, and depending on how much you have to sell, the more items they will be willing to give you. Right click on a villager with a trade item to open the screen. 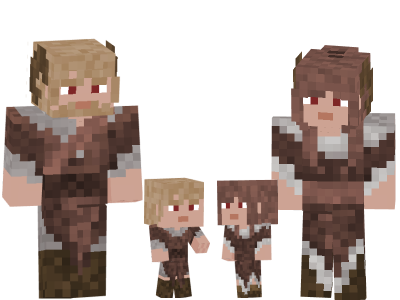 You can woo the opposite gender of your race by gathering special flowers unique to your biome. Right click holding one, and they will fall in love. Once they are your lover, you can marry them by crafting a ring, and giving it to them. You will then be married, and can have kids of your own.

This mod is under heavy development! There will be occupations and quests in a future update. 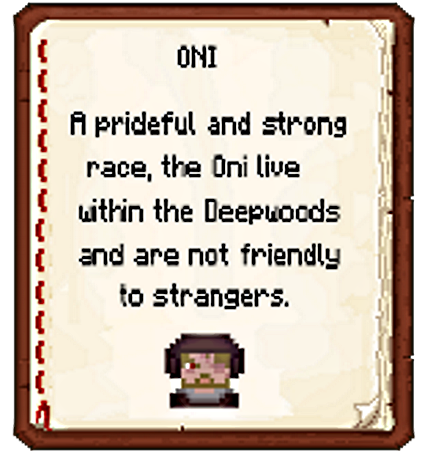 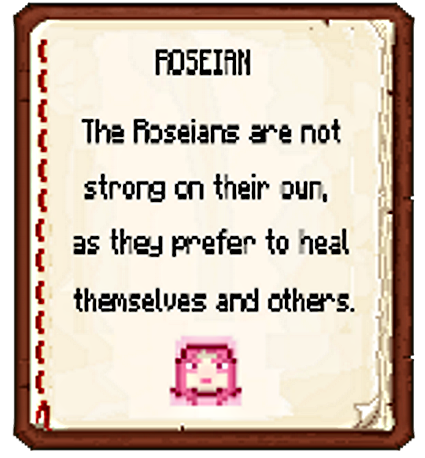 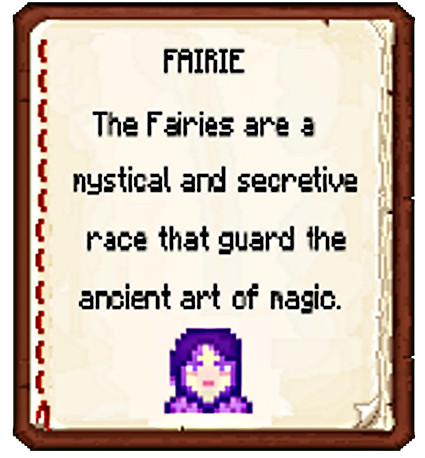 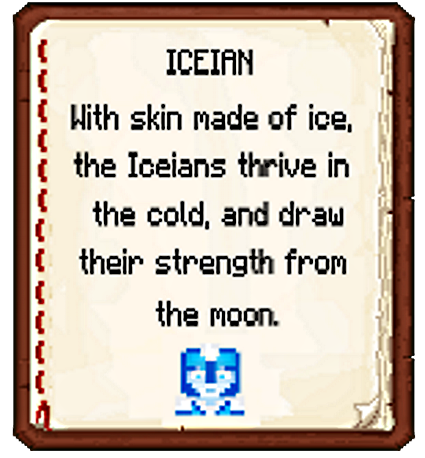 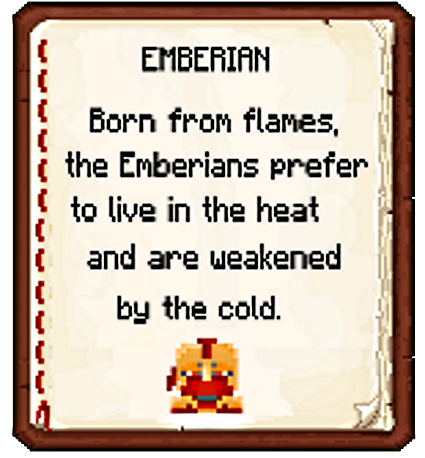 A tough, horned barbarian race that has no tolerance to any stranger who wanders into their motherland.

A sensitive pink race born from Rose Quartz. They have the ability to heal themselves and others.

Special Abilities: Able to summon an effect cloud of instant health, at the cost of an experience level. must be at least level 10 to trigger this ability.

A magical race and the core of the Otherworld, the Fairies are wise with many tales that they'd rather not disclose to the unworthy.

Special Abilities: Can give themselves potion effects when in danger: (Fire Immunity when on fire, Water Breathing when underwater, Slow Falling when falling.) Costs an experience level. Must be at least level 5 to trigger this ability.

A stubborn, strong race that is made up of ice. They are comfortable in freezing temperatures, and draw their strength in the artic.

A prideful race made of ash and fire. Their hair glows and their skin is burning to the touch. They are at home in the heat, and grow powerful in flames.

Attributes: Immune to any type of fire damage, and takes extra freeze damage. Strong when burning.

Special Abilities: Sets entities on fire by punching them. 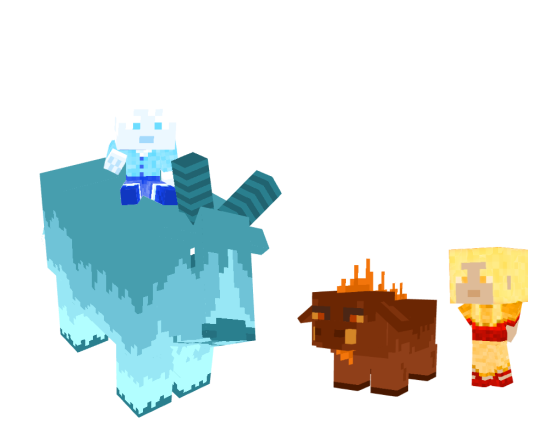 If you chose human, you can still enter the Otherworld through a nether-style portal made of crying obsidian. But you will need to obtain the Totem of The Otherworld, which can only be found by summoning a new boss: The Otherly Minion (The summoning ritual will be found on the wiki.)

Check Out My Discord Server!

- Updated all types of Villages

- Updated townsfolk Interactions (Can marry other races, cleaned up bugs)

- Changed Oni Brutes to be able to imprison Roseian players

- Other Additions, Bug Fixes and Improvements

My gosh, this mod's description sounds so sick! Gonna make whole modpack on 1.17 to test it out <3
Also I'd suggest you to put some screenshots to your description to "lure" people, because the idea is way too good, yet people like to read visual stuff, unfortunately.
I'm really amazed to see how your stuff develop, KitKait, if you'd need any help/bugtesting for the mod, I'd love to help :D

Thank you very much! :D I really appreciate it! I'd love to have a bugtester because I work solo and I'd really like some feedback from other people as well :) Let me know what you think in your 1.17 modpack! Thanks for downloading!

This mod has a lot of potential and these mew mechanics are awesome :). think you should put more images in the page

Hey, thanks! :D I didn't upload pictures because I posted it late at night and was really tired lol xD
there's only so much coffee can do ':/

Thank you very much! :D

Thank you :D I’m really glad you enjoy it!

I really like the idea of NPCs that you can talk to and form friendships or enemieships with :)

Thank you! Im glad you like it! :D
I always felt that Minecraft singleplayer is very lonely and it would be interesting to meet people like the player :)

Really innovative idea! Haven't come across too many mods that implement a dialogue system. Love the idea of having different factions since you don't see interactions between mobs very often in vanilla (best I can think of is piglins fighting hoglins when hunting), hope at some point in the future this comes to 1.18 so I can add it to my modpack. Keep up the great work :)

Thank you very much! :D
I don’t think it’ll be updated to 1.18 anytime soon because I still have so much to add to this mod. Sorry! :(
I personally like 1.17 because it keeps the old terrain of Minecraft with adding some of the new features. 1.18 and up is kinda over the top for me lol.

That's fine, i just prefer 1.18 since for most curseforge mods (the ones in my modpack mostly) 1.18 is the one that most users update their mods for (1.15 and 1.17 are kinda in a limbo for most mod creator support), but I get that there still needs to be updates before getting 1.18 (or really any other version) support for the mod seeing as its still in alpha and all, just kinda threw 1.18 as a thought out for once the mod is finished seeing as how a lot of people play on 1.18.2 and 1.16.5 for modpacks (I know how much of a pain in the neck porting mods to a different version can be), still more than happy to see how this cool mod comes along even if it stays a 1.17 mod :)

Yeah lol thanks for understanding :)
I play my mods in game so I usually make mods for the version I play most anyway. And if people wanna download it and play it for themselves that’s really awesome :D
But yeah 1.18 completely overhauled the dimensions and everything and I just don’t play that version really so I’m just focusing on this version for now. But I’m definitely going to consider it and once it’s more developed, I’ll think about making a 1.18 version and up! :D

Yeah no problem! Can't wait to see what the next update might include :D