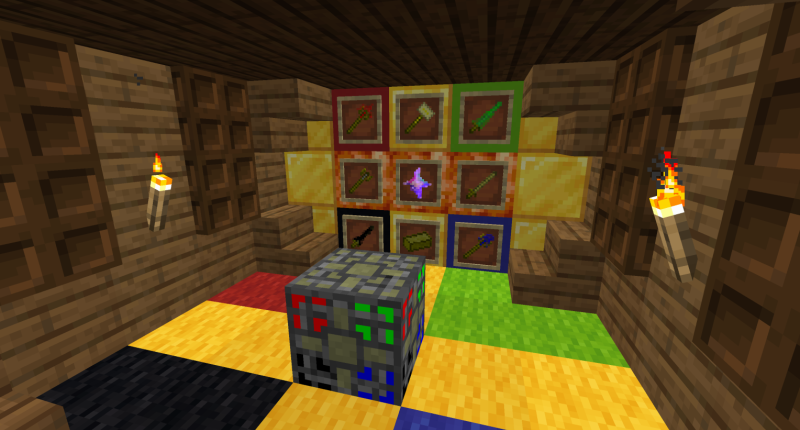 Forge many weapons with unique abilities

Everything starts with the Wraith Knight, a summonable miniboss that must be slain for Essence. Essence is the fuel for all of the mod's weapons, so you will repeat this fight many times.

Use the Forge Table to create unique weapons with various abilities, from the Staff of Fire and its barrage of enchanted fire to the Archer's Blade and the rain of arrows it brings upon enemies.

The advancements menu serves as a guide to get started in survival. Check it or you will probably become very lost very fast. At the moment, the only place to find crafting recipes and Forge Table recipes is this page, so come back as needed when you want to craft or forge things. (You can view the crafting recipes with mods like JEI, but the Forge Table recipes will not show up.)

This mod is still a work in progress. More weapons will be added in future updates, as well as potential other features, such as:

The Forge Table GUI has four slots; there are three in a row on the bottom and a top slot. The left slot should contain a golden "base" weapon (the golden staff or golden dagger). The center slot contains the ingredient, and the right slot should be empty to make room for the output. The top slot should contain a forge hammer. When the button is pressed, the forge hammer will be damaged and the items in the left and center slots will be consumed. The output weapon will appear in the right slot. If an incorrect configuration of items is used, nothing will happen when the button is pressed.

There are a few crafting recipes in this mod, mostly to craft the items used to forge weapons.

Due to a glitch, I cannot update the changelog properly at this time.
Hopefully I will find a workaround in the near future so that the changelog does not look broken for all of you.

(If you are wondering what the glitch is, everything appears in HTML when I try to edit the changelog, and since I do not know how to use HTML, I cannot properly format anything.)

This issue sort of fixed itself randomly. Likely, it was just the website being wierd yesterday for no reason.

a total of 1/198 downloaders decided to commet

I know, it feels like more people should be here. Well, congratulations on being first.