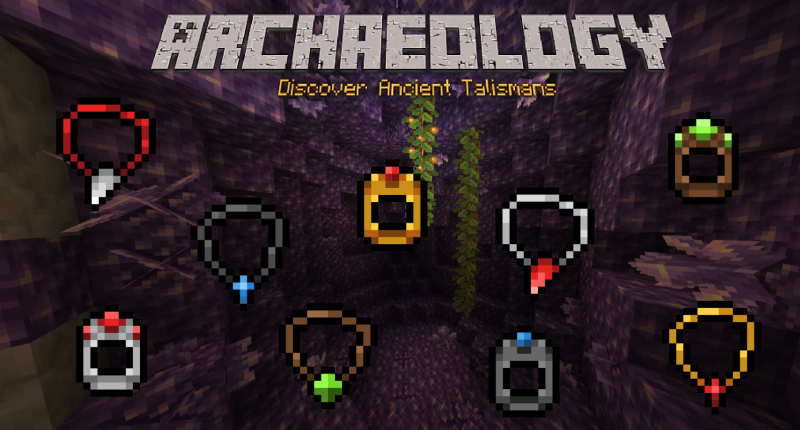 Synopsis
Uncover ancient Talismans that the player can wear to provide combat related buffs, to collect these you must take on new "mini-bosses" known as Ethereal Monsters - these are regular monsters (including ones from other mods) that are given unique traits that provide a difficult challenge and add much needed depth to minecrafts simplistic combat. This mod is a great addition to any RPG or Rogue-Like modpack and adds both breadth and depth to Minecrafts looting and combat mechanics.

Features
This mod features an additional inventory widget that lets you equip a ring & amulet. The default button to open this widget is "Y". Upon death the items in this inventory are dropped to the floor just like the in-game inventory -unless- keep inventory is on. Wearing a ring/amulet provides a passive buff to combat.

Rings & Amulets each take up a respective slot, meaning you cannot wear two rings/two amulets, you can wear one of each. With-in Talisman types you get defensive & offensive perks; for example the "Second Wind" ring gives you a speed boost when hurt at low health, the "Firey-Catch" means that when blocking a projectile with a shield you project a fireball back out at the enemy. On the flip side the offensive perks such as "Hooked Hotshot" that inverts the knockback of your projectiles allowing you to reel in enemys with a volley of snowballs.

These Talismans are a great addition to your arsenal and let you customize your build, but to get your hands on this gear you going to need to take on an Ethereal Monster... These creatures by default have a 1% chance of spawning - causing a regular monster to gain additional armour, attack damage & a unique special trait. These special traits range from providing support buffs to other monsters, channelling a storm at the player, summoning a locust swarm upon death, etc. These monster can be identified by their custom health bar above their head - the colour of which signifies which special trait the monster has. Once you have killed an Ethereal Monster they have a 20% chance to drop a random Talisman, be that a ring or amulet.

Thanks to Kyrise for the Assets (CC BY 4.0 - https://creativecommons.org/licenses/by/4.0/)
Thanks to MCreator for the software making the creation of this mod possible

This mod must be a motw! it is very well done and interesting :>

I like the mechanics, but textures could be better. Good luck!

I consider myself very good with mcreator, yet I'm a noob compared to this guy.
I mean, like this should 100% win mod of the week.

Thanks! I really appreciate it!
Hopefully some more to come in a similar theme :D

No problem, looking forward to them :)

PLEASE--Tell me exactly what you did to get those custom armor slots and make descriptions appear when you put a certain item in. I've wanted to do something like that for some time now.

The custom armour slots are simply saved as Global Variables that are Player Persistent. When you press the Talisman button, it opens a custom storage GUI and reads what the players Talisman is and sets the slots appropriately. When you close the menu it updates what Global Variable you have.

From there you can read what Talisman someone has by doing a logic test of the players Global Variable
(If you don't understand global variables, google them)