Change completely: to the depths 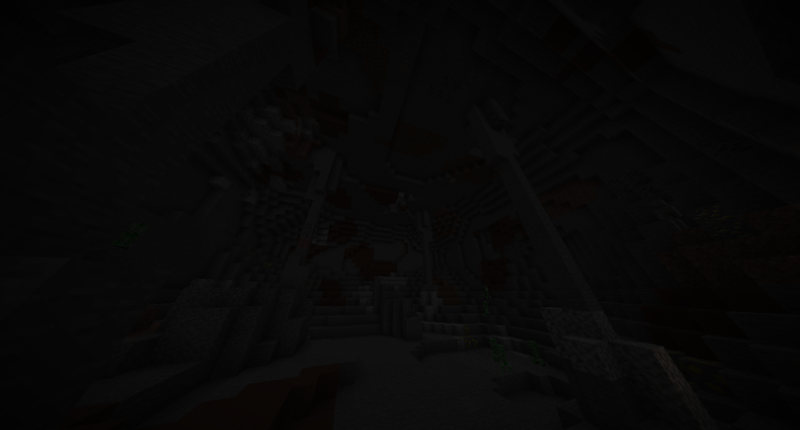 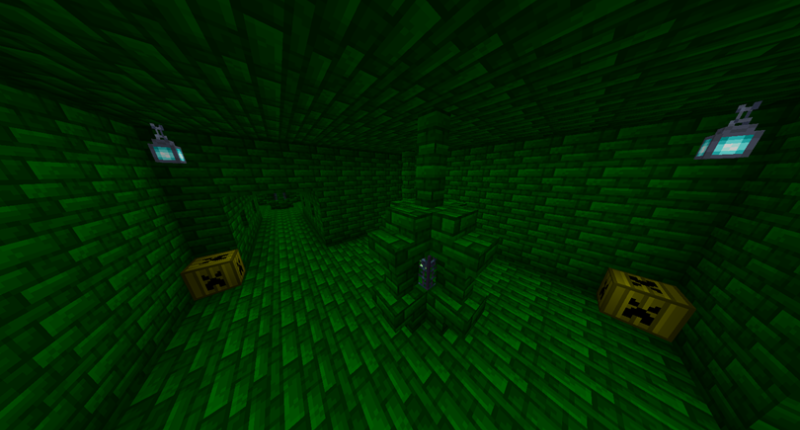 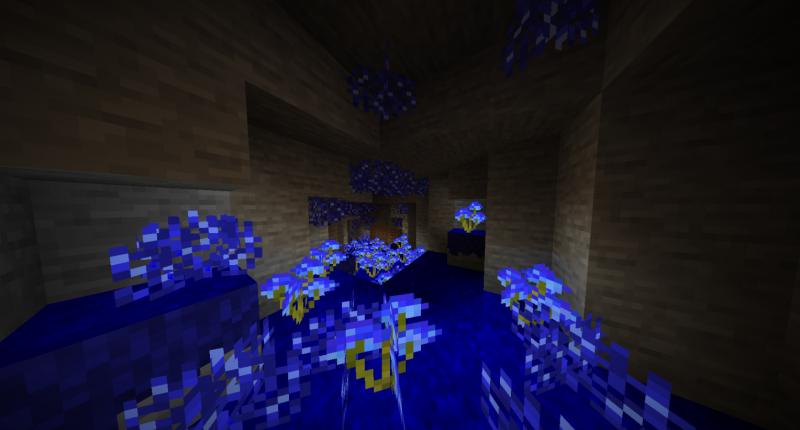 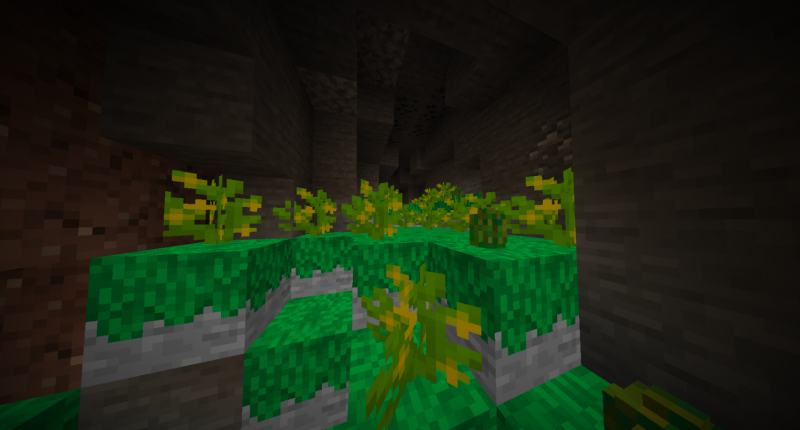 Welcome to the Change Completely: to the depths page. The goal of this mod is to change the minecraft underground with new features, dungeons and mobs. Let's see the features:

- Blue Mushroom Fields: a cave biome composed of expanses of bioluminescent blue mushrooms. Mushrooms can also be cooked in a great blue soup!

- Creep Caves: A rather dangerous and slimy creeper-themed biome. You will find many creeper eggs here, but be careful not to step on them or you may be attacked by a not unhappy creeper.

- Mossy Caves: a very humid and mossy biome, with lots of moss!

- Icy Caves: Caves made up of packed ice, blue ice and the new frozen cobblestone

- Spiked caves: caves with many speleothems, be careful not to get speared! 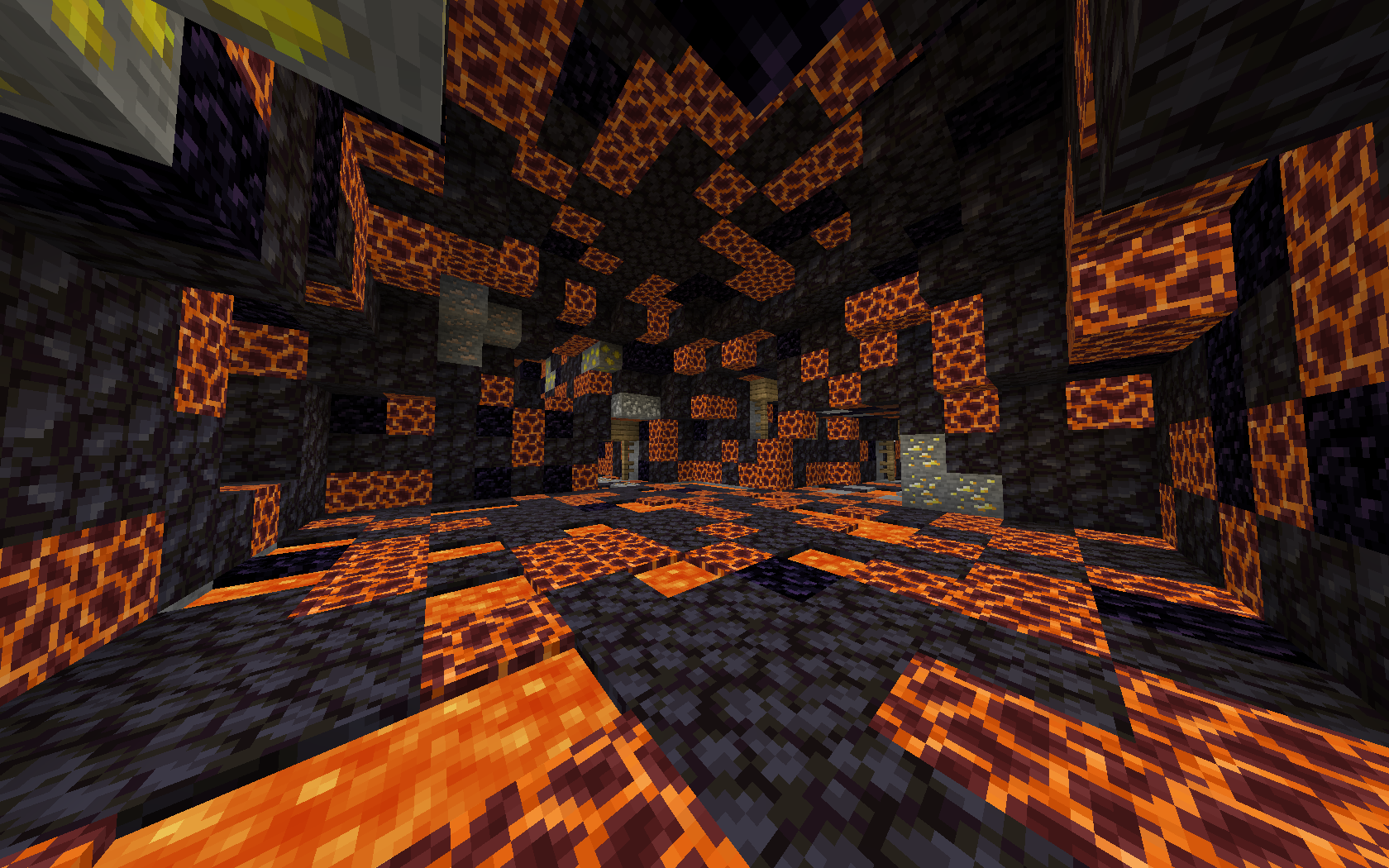 - Honey caves: when the bees thinks that beehive are too small.

- Endereyer: an eye of the Ender that has come to life and is not very happy to meet players

- Mossy skeleton: a more mossy and greener variant of the normal skeleton

- Redfish: a silverfish that came up with the idea of ​​infesting redstone ore by chemically bonding with it. Be careful now when looking for the raw material for your circuits

- Minishroom: a cute little mushroom that loves life. It can be tamed with some blue lichen.

- Troll: a cute monster who loves to collect things and devour unsuspecting players

- rotten planks: now any planks will be spawned underground there is a chance they will rot

- Ignimbrite: can be transformed into slabs, stairs and bricks

- Sulfur ore: for those who are tired of the usual coal and of making a creeper farm

- Loot block: Can be find in the creeper temple. Break it and take the loot!

- Overworld Quartz Ore: can be found in quartz caves.

- Chemical torches: unlike normal torches they can be thrown like a snowball to make your explorations brighter

- Dynamite: a new way to dig with style

- Crystallite shard: a strange glowing crystal with a big power in it

- Pocket creeper: a funny, adorable mini creeper that lives in your inventory and give you gunpowder

- Depths gauge: This item give you the actually y position

- Ender totem: this item will save you from the void 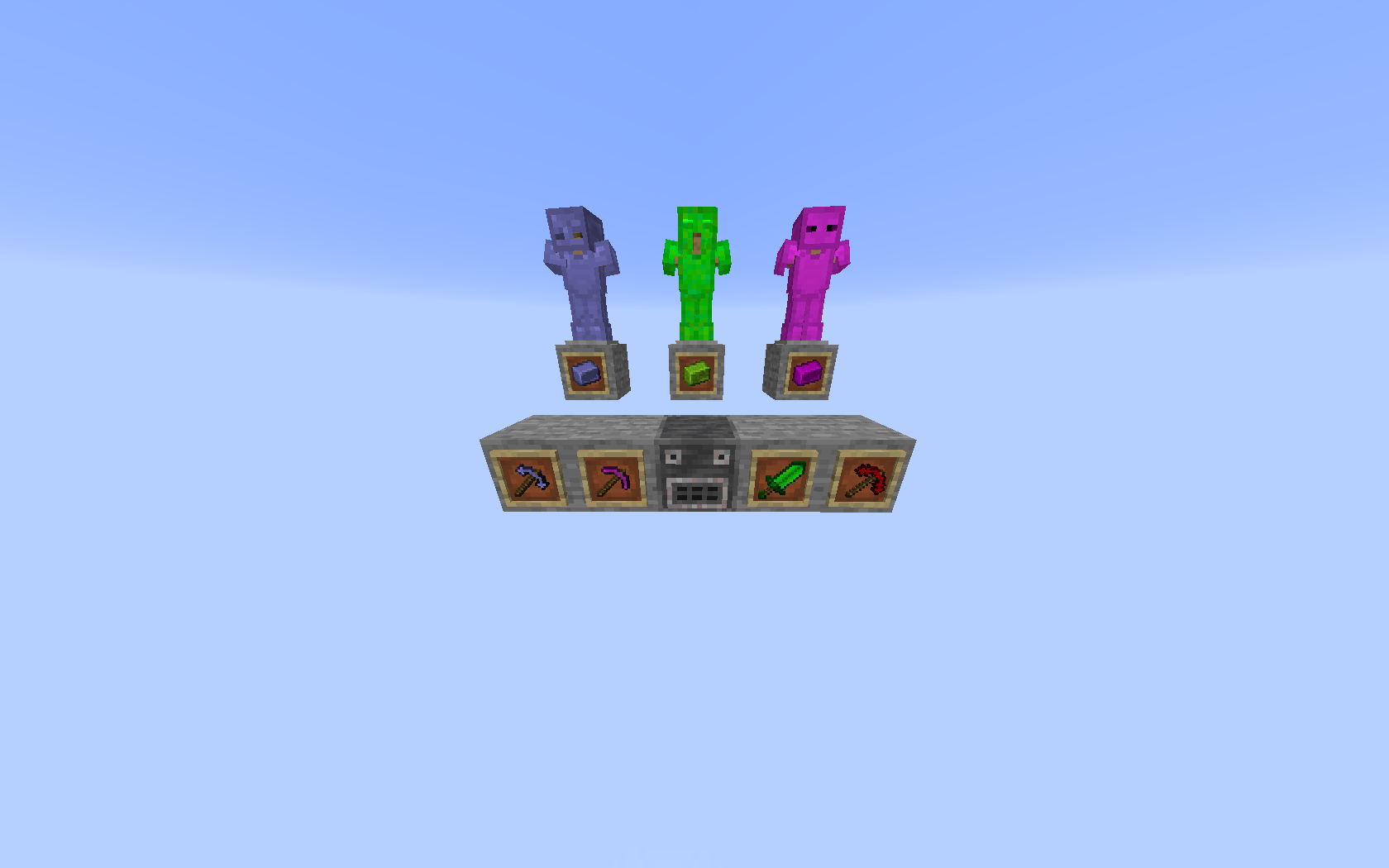 - Redstone essence: dropped by redfish. The pure power of redstone.

- Creeper bucket: bring you ... friend? around the world

- Larger and Bigger Caves: Now you can no longer complain about the size of your old caves

- Creeper Temple: a dungeon to explore and explode!

- New dungeons: if you are tired of the old ones. 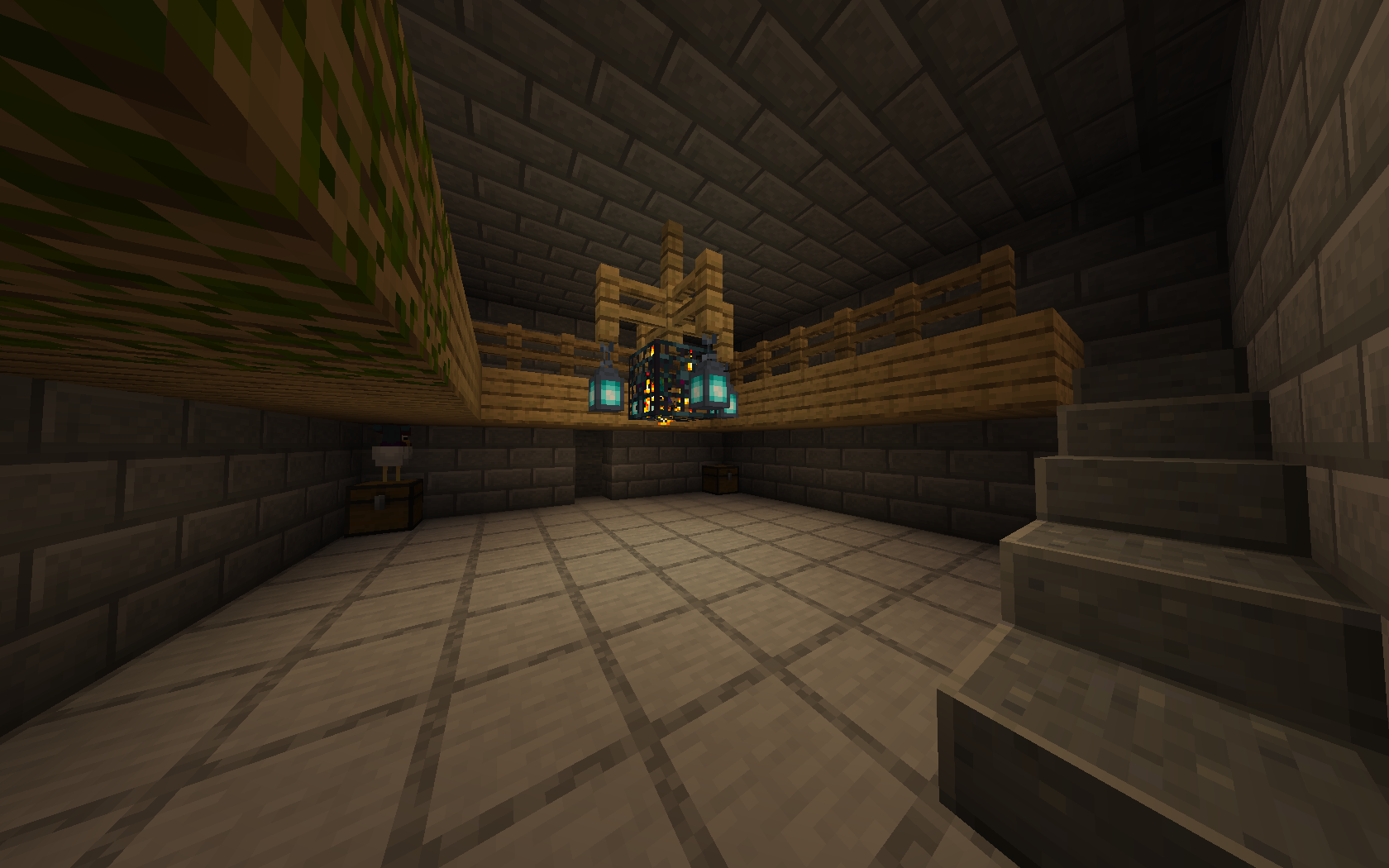 - Probe: if you right click on any block it will tell you all its properties like F3. It also works with blocks from other mods.

- Caveman: Being underground will give you speed and haste.

- some feature can be quite laggy, so there are two gamerule that allow or deny this. Warning: if you put ReduceLag gamerule on remember that this remove many important feature!

- the mod is compatible with Wasteland of Baedoor by Toma400, check out his mod ;) :

I hope you enjoy this mod and appreciate its content! If you want to report bugs or suggest somethings join the official discord server:

You can use the mod in modpack or in a video freely and without problems, without mentioning any links, but of course an addition always pleases me :)

Oh, change completely is back!! <3

The Return of the King

Out of curiosity, do you plan to come back to desert ideas someday? I mean, I can always use both old Change Completely and new one, but if you plan, I can wait ^^

The initial Change Completely project was a huge mod, but then I realized that file of that size would be unmanageable, so I divided it into chapters. This is the one about the caves. I have not yet decided on the theme of the next one, but perhaps it will be the desert.

Oh, awesome then! I'm really curious how it will work out. Just downloaded latest snapshot, so there's a chance I will report my feedback soon ^^'

I hope you like it because everything you've seen so far is just the beginning.

The mod is now on Curseforge! Here is the link to download it: https://www.curseforge.com/minecraft/mc-mods/change-completely-to-the-depths

I recommend setting files' status to "release", because beta and alpha stages don't show your mod while searching. You will get A LOT more downloads and it's not against the rules. Believe me, as I got only 4 downloads with my "alpha" for whole month, and after friend telling me that I should have "release" status from the beginning and changing it, I had instantly ~20 downloads in about one day.
Anyway - congratulations! ^^

A new update of the mod will arrive soon! I'll add a ton of various things, also proposed by you in the mod forum. P. S. I think you regret the old king creeper ;)

It's good, but a lot of the models aren't Minecrafty, and have a lot of cubes in them, that could be turned into just a few cubes.
Also the colors are a bit weird.

Forgot to say the pixels for armour isnt consistent with everything else.

I'm glad you liked it and thanks for the feedback, but I didn't understand what armor you are referring to and what you mean. Also some models are intentionally not vanilla to give a change look. Anyway, write in the mod forum for any other feedback so as not to fill the comments section;).