The biggest update in the history of MCreator once again - 2021.2. This update is packed with many new major features so make sure to download it and try it out!

Probably the biggest change is the Java version used to compile and run MCreator. MCreator now uses Java 11. It may not sound like a big deal, but with this update, the performance of the program will greatly improve. MCreator now natively supports high DPI monitors, better OS integration, better font rendering, and overall crisper UI. Move to Java 11 will also ease the move to Java 16 needed for Minecraft 1.17 once we start working on it. 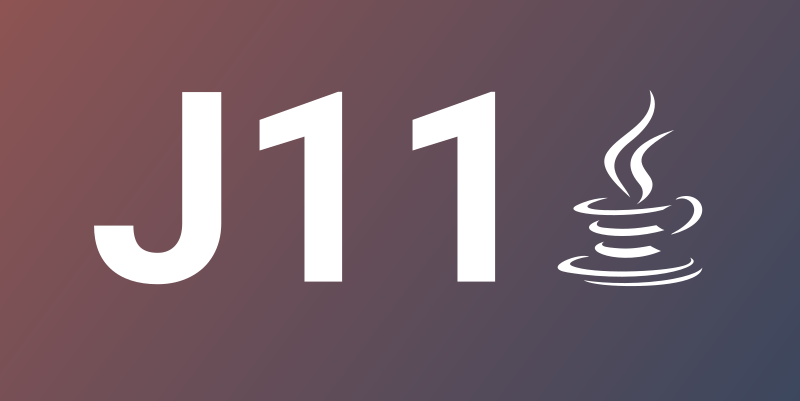 Another big feature that will not improve your mods, but will improve your experience using MCreator. MCreator now supports themes loaded from plugins. There are two official themes like before: light and dark theme. The light theme has been a tad improved and is now an actually usable theme for those who prefer the light interface. We have also added two community-contributed themes that won the theme contest. More in the screenshot below. 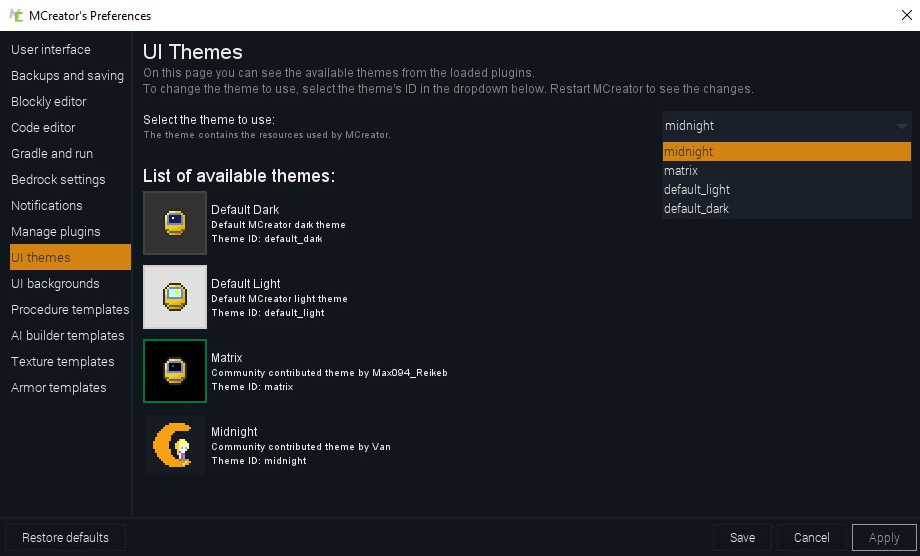 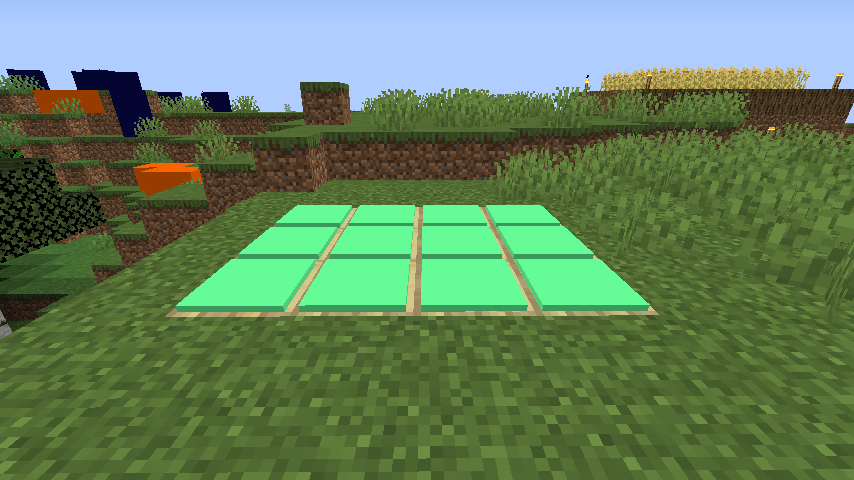 And here you can see a button block base with functional redstone logic in the picture below. This will help you make a more complete wood pack in your mods.

Block bases now also have a true 3D preview in the workspace mod elements list. This was you can much faster find the block you are looking for visually.

We can't wait to see all the new automation and tech mods using this neat new feature :)

Potions split into effect and item

Another big change is that we split the potion mod elements into the potion effect and potion item. Potion items can now have multiple effect instances in the bottles. Preview will properly calculate the potion bottle color for you. Existing workspace will be migrated to this new system for you. 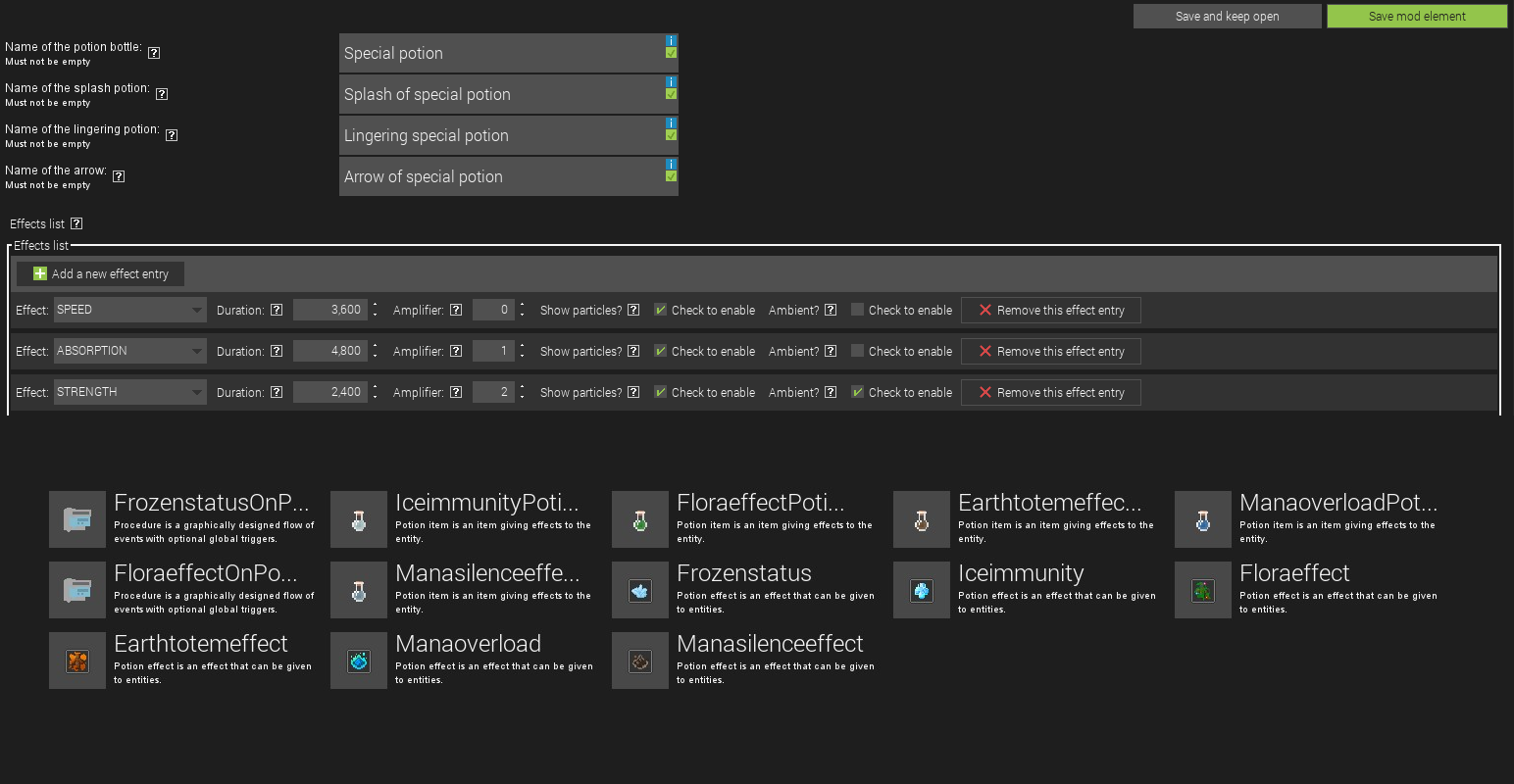 This is a big one. Custom overlays can now (conditionally, of course) overlay ANY UI in Minecraft. This means you can now add texts and images and icons to any screen in Minecraft, which allows for quite a lot more customization than before.

This is a new and neat convenience feature. We have added a few new workspace mod element list views in case the ones we had so far did not suit you the best. You can change the views by selecting them from dropdown, or using Ctrl + mouse scroll wheel to zoom in or out.

Plants got some new interesting new parameters too. Check them in the video below.

Custom blocks and plants can now define custom sound sets for sounds such as step, break and place sounds. 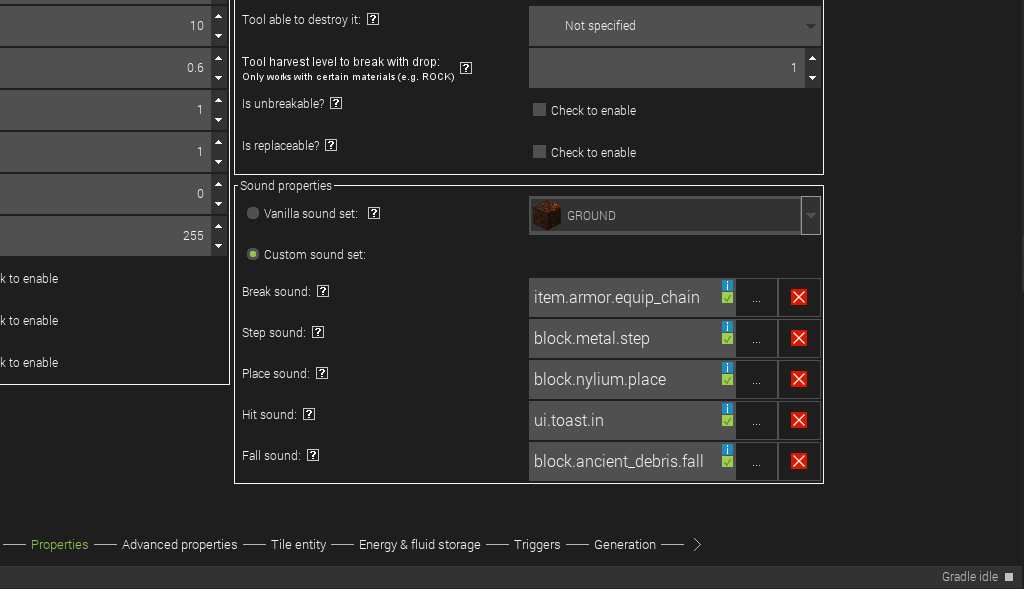 GUIs got a new component: checkboxes. With this new element, you will be able to enhance your GUIs and improve their usability in a new way.

Potions (vanilla and custom) can now finally be used in brewing recipes. No more need to make a custom item for the potion bottles in order to use it in the brewing recipes. 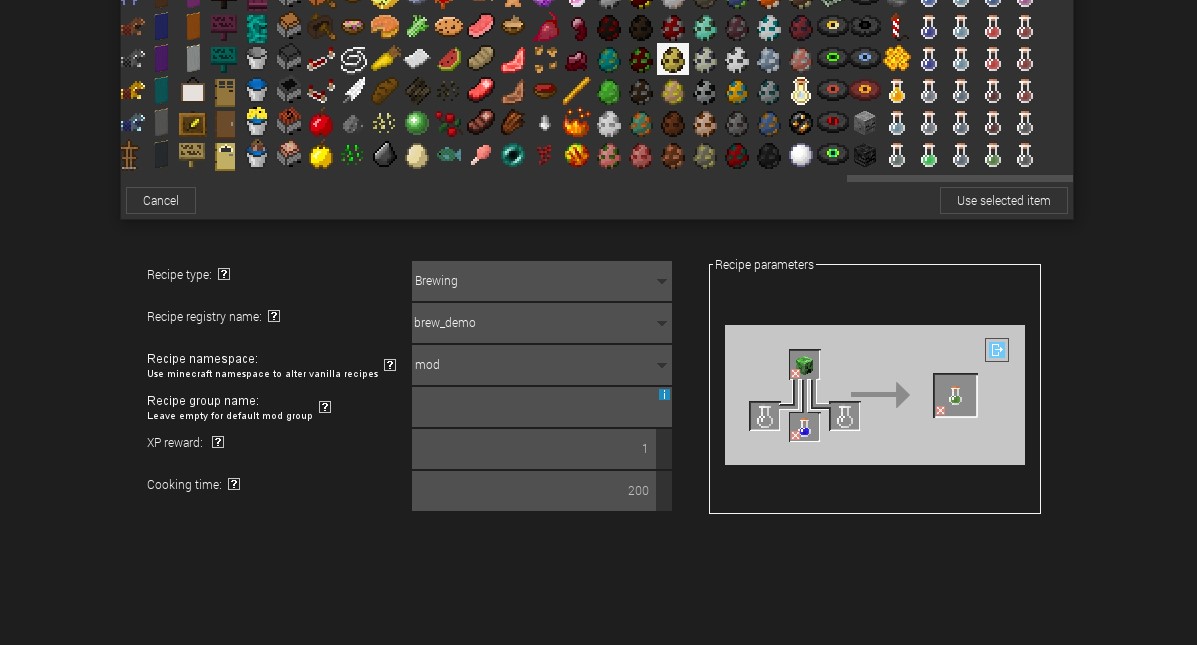 A new tool type has been added: fishing rods. Under a tool mod element, you can now define custom fishing rods with custom procedures running on them, or a custom model for the rod. 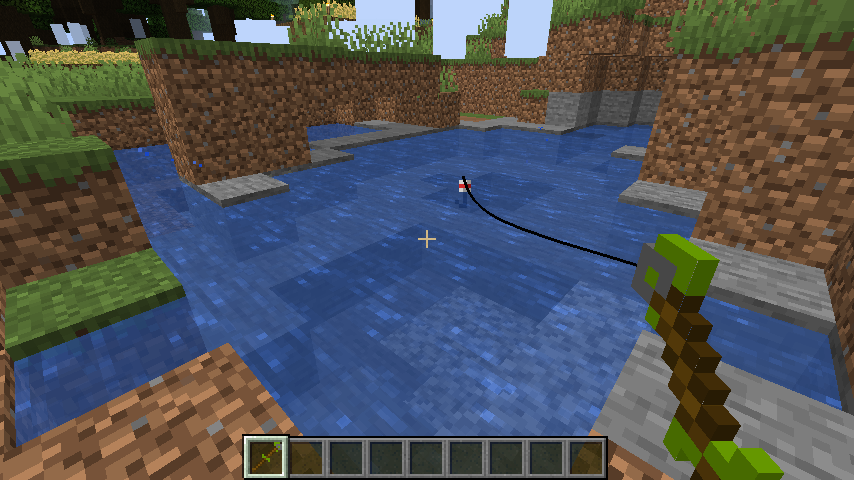 New variable types have been added, including direction and block state types supported by both global and local variables. Plugins can now easily define new local and/or global variable types too.

This update adds tons of new procedure blocks. Some of them are showcased in the image below. 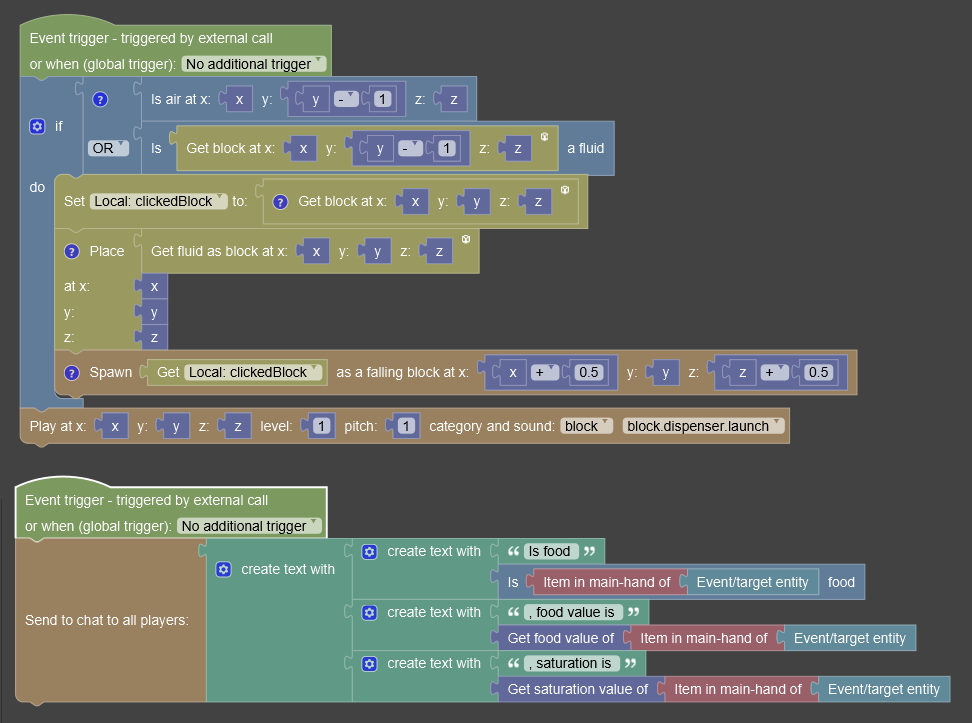 A small but useful new feature is variable and dependency shortcuts. By double-clicking them on the list, they will be added to the procedure editor for you.

Global variables with a player scope can now have a target entity in procedures defined. This will allow things like the variable exchange between players and more.

Mod element list finally got a context menu. This way much less mouse movement will be needed to edit the mod element once you select it ;) 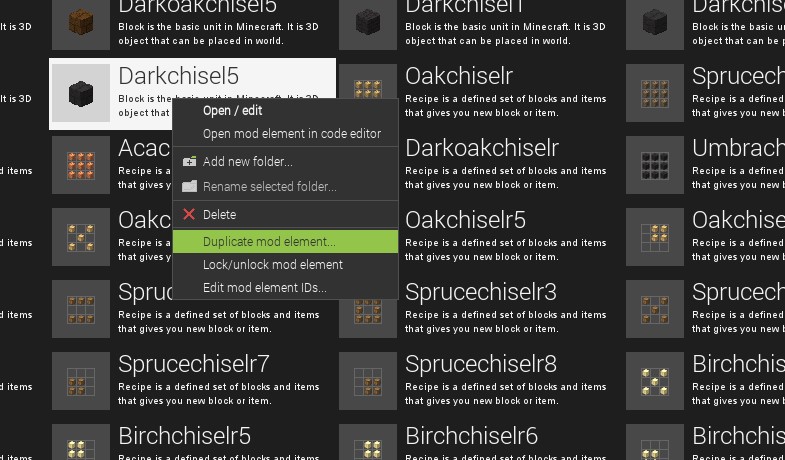 Custom fluid buckets can now be used in recipes and in other places where items can be selected. You will no longer need to make a dedicated custom bucket item to achieve this. 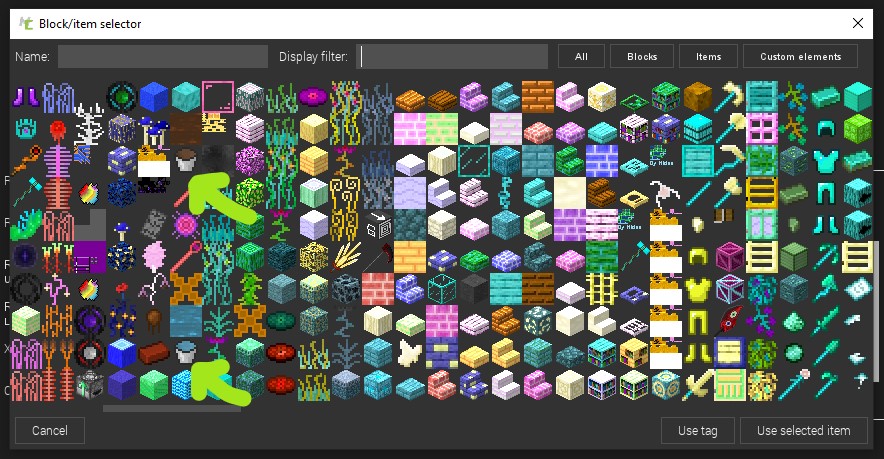 Custom items can now define a custom dispenser behavior and call a custom procedure when dispensed. A dispense success condition can also be defined which will determine how the dispenser will react to the item. 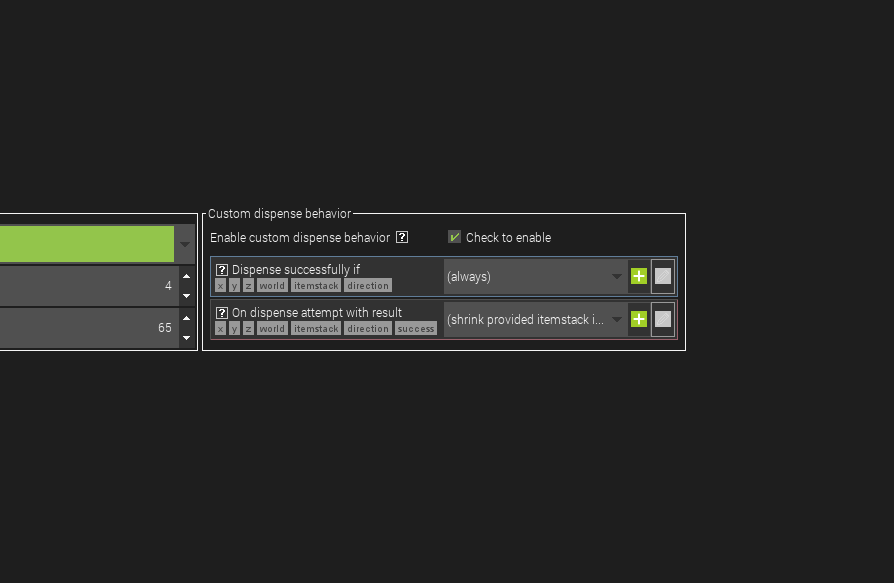 I would like to mention the Fabric plugin too. Our developer Goldorion has been working hard on it in the past months and now, this plugin supports almost all mod element types and over half of the procedure blocks. If you are interested in Fabric modding, make sure to install that plugin (which is already compatible with 2021.2) and try it out and provide feedback to the developers of the plugin. If you want to go a step further, consider joining them on their GitHub to help them out with the development.

UPDATE: We have released a patch update to a bug found in 2021.2 release:

To install the patch, re-download 2021.2 and install it again. Make sure to uninstall the current version first. We will not be rolling update notifications yet as this patch only applies to users using MCreator Link.

The power of the Sun, in the palm of my hands

Awesome work as always, what a new version of MCreator to be alive :D I'm so happy with redstone output, it was one of the most requested features for me and it's here <3

Klemen, Matej and contributors made a draconic work in the mast months for this update and it's one of the greatest update. It's nice to see you love it :D

Epic, gonna try it out now!

I loved working on this huge (again... XD) update. For this update, I wanted to drastically improved possibilities with plugins and I think I achieved this objective. I hope you didn't lose your motivation with my 3 PRs with drastic changes in the code (sorry). However, variables clearly needed a good recoding because it was simply a mess to add a single local variable. I think procedures now have a lot of new possibilities with this update. :D I'll try to not make such huge changes in a single update, even if it's nice to develop (but it's less fun when you're coming to change several things xD).

I can't wait to see how will look the next update (because we all know it won't only be support for Minecraft 1.17.x ;)) and which features you'll make secretly.

Oh and by the way, you should change "The best mod maker" by "We make every new update bigger than the previous one". It applies since MCreator 1.8.0 I think. XD

Thank you for all your work on this update, you are a big part of it ;)

This is awesome! :D

finally it's out yay

I love this moment!
It seems, a full redstone support comes to true, at last! :)
And other features are awesome too.
A huge thank for Klemen and others developers who made it all!

You are welcome and glad to hear you like it!

I've been waiting for this for a while! I am so excited to install this and start creating!! My favorite part is... Everything!

Hehe I am very pleased to hear that :)