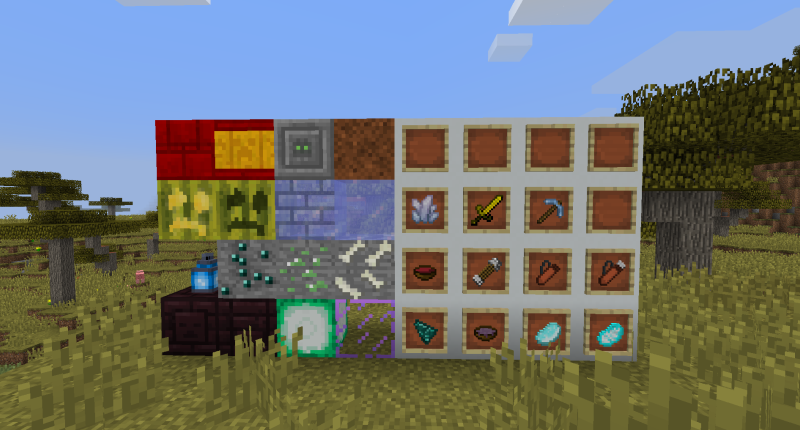 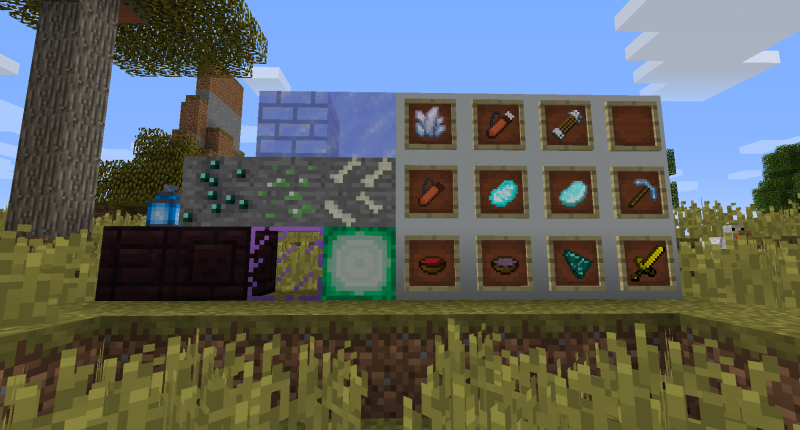 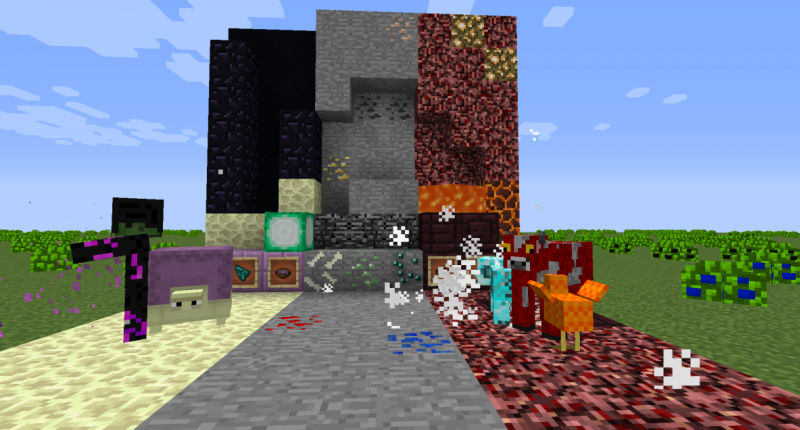 Welcome to Modular Expansion, a collection of little mods to improve the game!

These additions were planned to be included in RaolCraft Omega, however, since they are little indipendent additions I decided to make a separate download for them.

This collection is called "modular" because there are different mods and you can choose what to use.

It is called "expansion" because every mod is an expansion to a Minecraft aspect.

I actually made these mods because my main mod, RaolCraft Omega, is incompatible with most mods due to its big content, so I decided to make a few little mods that should be compatible with everything (including RaolCraft).

Most of these mods should make RaolCraft easier: for example, the End Expansion makes the trip to the End easier, but not everyone wants an easier game, so I decided to make it optional.

I won't update frequently these mods because they are meant to be little. Instead, I will make more of them (and update RaolCraft Omega).

Also, the mods are very little because most of the ideas I have need compatibility with RaolCraft stuff (If for example, I made a food mod that added every food of RaolCraft and flour, and I also made a machines mod, how would you craft flour if it requires the Pulverizer from another mod? That's why RaolCraft Omega is so big, for crafting compatibility).

You can call the mods "modules".

At the moment there are 6 modules: End, Nether, Easy Ores, Quiver and Caves, Jungle and more are coming soon.

The modules all found in the same zip file. To install them, download the zip file, extract it and choose which modules you want.

What do the modules add: 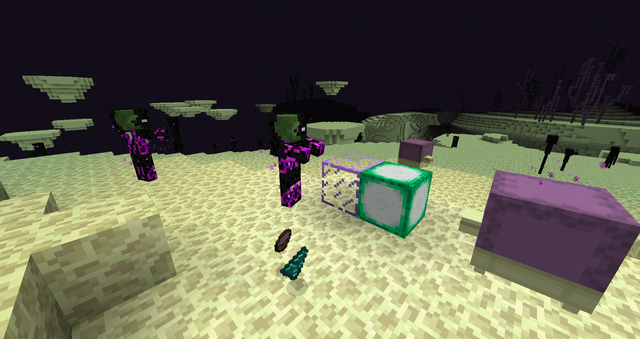 This mod adds a few new ways to gain Enderpearls as well as new things to craft after that you have been to the End.

A mob with custom 3d model that spawns in most biomes, including the nether (but not including the End). It is neutral, it has a lot of life, it does high damage and it is very slow, but it becomes faster when attacked. It also has a few armor points. It is very rare and drops a lot of Ender Pearls. Since it's neutral and very powerful, I recommend fighting it only when you have some good weapons.

Another mob like the Enderturtle, however this is more common and less powerful and can be spot very easily in the Nether. Drops Rotten Flesh, Ender Fragments and (sometimes) Ender Pearls.

A decorative transparent block. When broken it drops itself instead of nothing. It can be crafted by surrounding a Popped Chorus Fruit with Glass.

Put 4 of these in a crafting table and you will get an Ender Pearl.

When eaten, it provides 10 food points (5 drumsticks). It causes 3 seconds of nausea and 6 of haste. It can be crafted by combining a bowl and 3 Chorus Fruits in a crafting table. 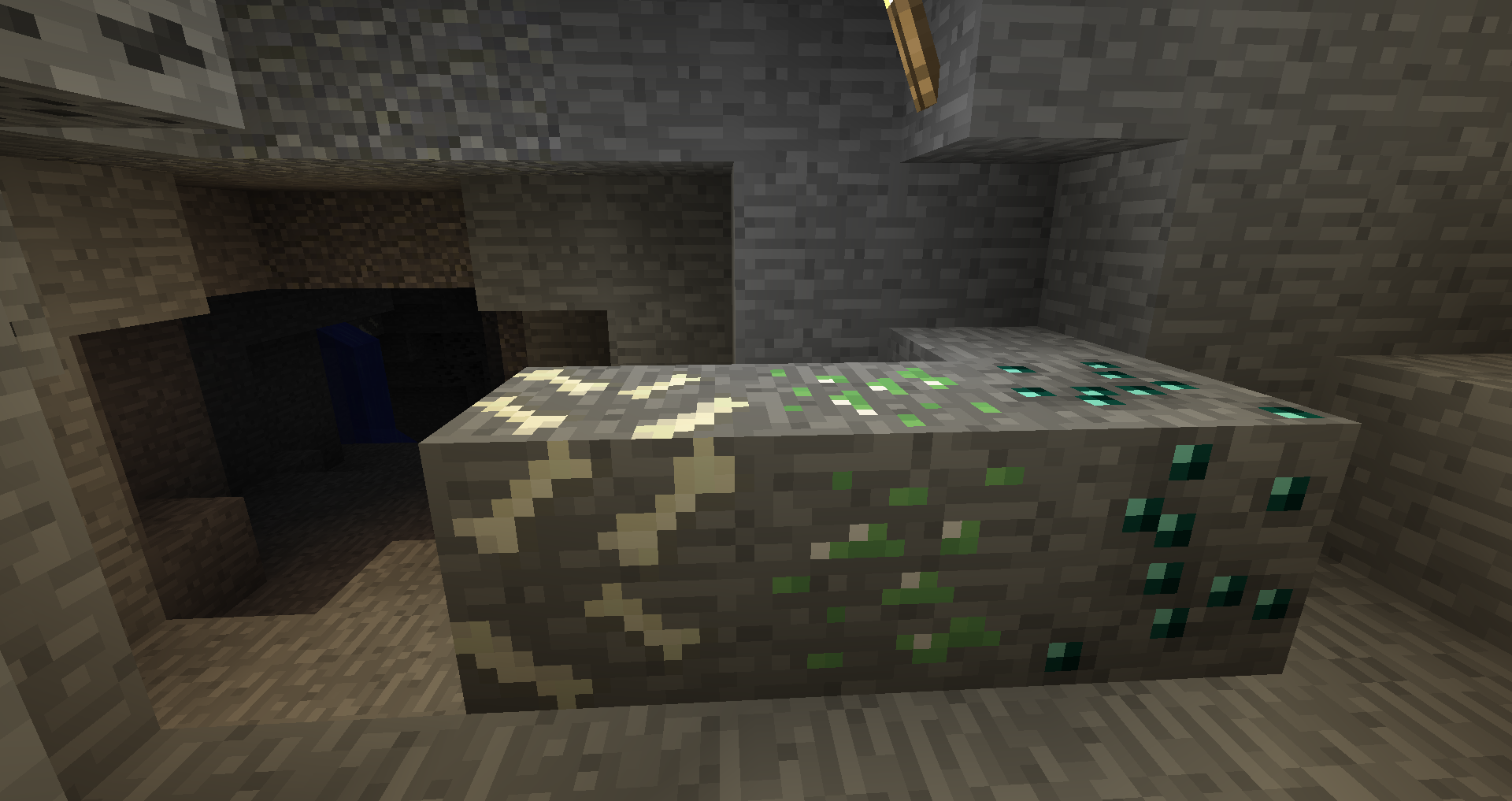 This is an extremely little mod adding 4 ores. It was intended to be used for modpacks centered on mining, but the ores are quite rare so they aren't too unbalanced.

This one is quite "common". Requires a Stone Pickaxe or better to mine it. Drops a bone.

Spawns in large chunks very deep underground. Usually found under the lava. Requires an Iron Pickaxe or better to mine it. Drops a slimeball.

Extremely rare. Requires a Diamond Pickaxe (or better, if you have a mod that adds powerful pickaxes) to mine it. Drops an Enderpearl.

Can be rarely found in large deposits under oceans. Requires an Iron Pickaxe or better to mine it. Drops a Prismarine Shard. 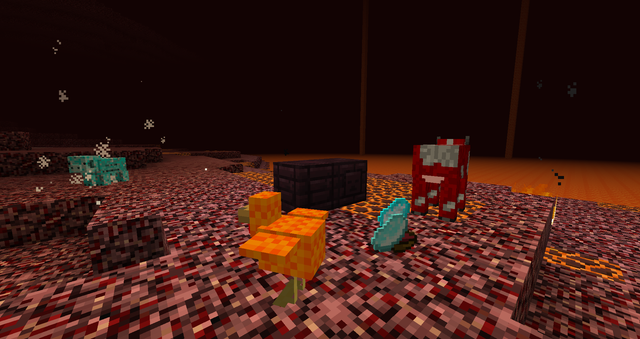 This module adds some features to make the Nether more fun and rewarding.

Spawns in the Nether. It's neutral. It's resistant to fire. Drops Raw Spectral Porkchops when killed. It's the only animal food source in the Nether (except chickens of chicken jockeys, but they are quite rare).

Spawns in the nether. It's resistant to fire. Can be miked. Makes Nether Wart Soup too if right-clicked with a bowl in hand. Drops Nether Wart when killed.

Spawns in the Nether. It is resistant to fire. It doesn't lay eggs, it only rarely lays fire charges. Can be breed using Nether Wart. It follows you if you hold Nether Wart. It drops feathers when killed.

Only heals 2 food points (1 drumstick). Can be crafted with a bowl and 2 Nether Warts. 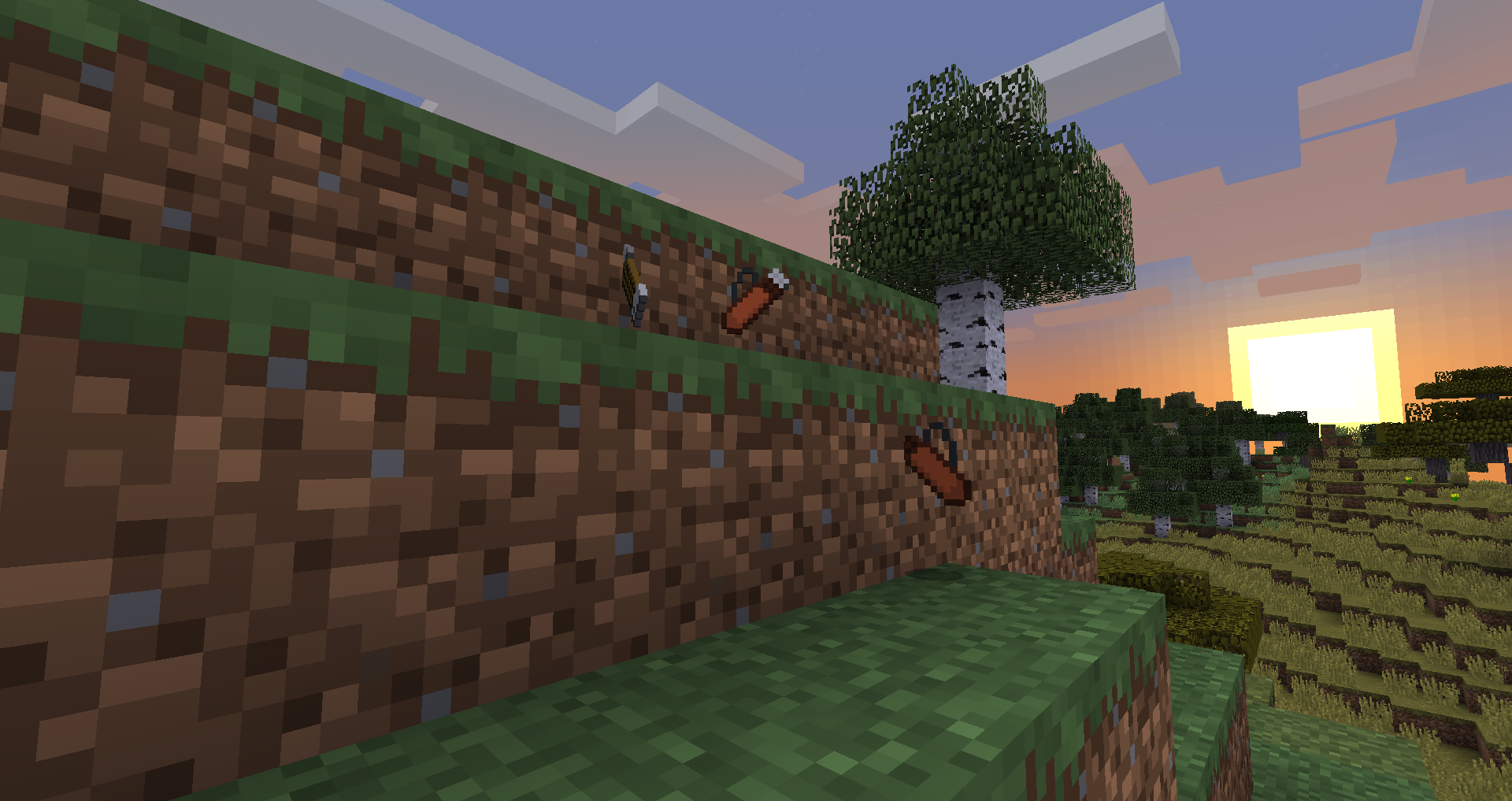 This is another extremely little mod that only adds an item that stores arrows, the Quiver. It works in a similar way to Raolcraft Omega's Tin Cans.

I don't know why have I made this module.

Combine 9 arrows in a crafting table and you get this. It can be turned back to arrows by simply putting it in a crafting grid. It is a bad arrow storage because it can stack only up to 7.

The main item of the mod. Craft it using leather in a cauldron-like shape. To fill it, surround it with 7 piles of arrows and an arrow. Right-click it while it's filled to get the arrows back (gives 64 arrows). Stacks up to 16. (You will obviously also get the empty quiver back. 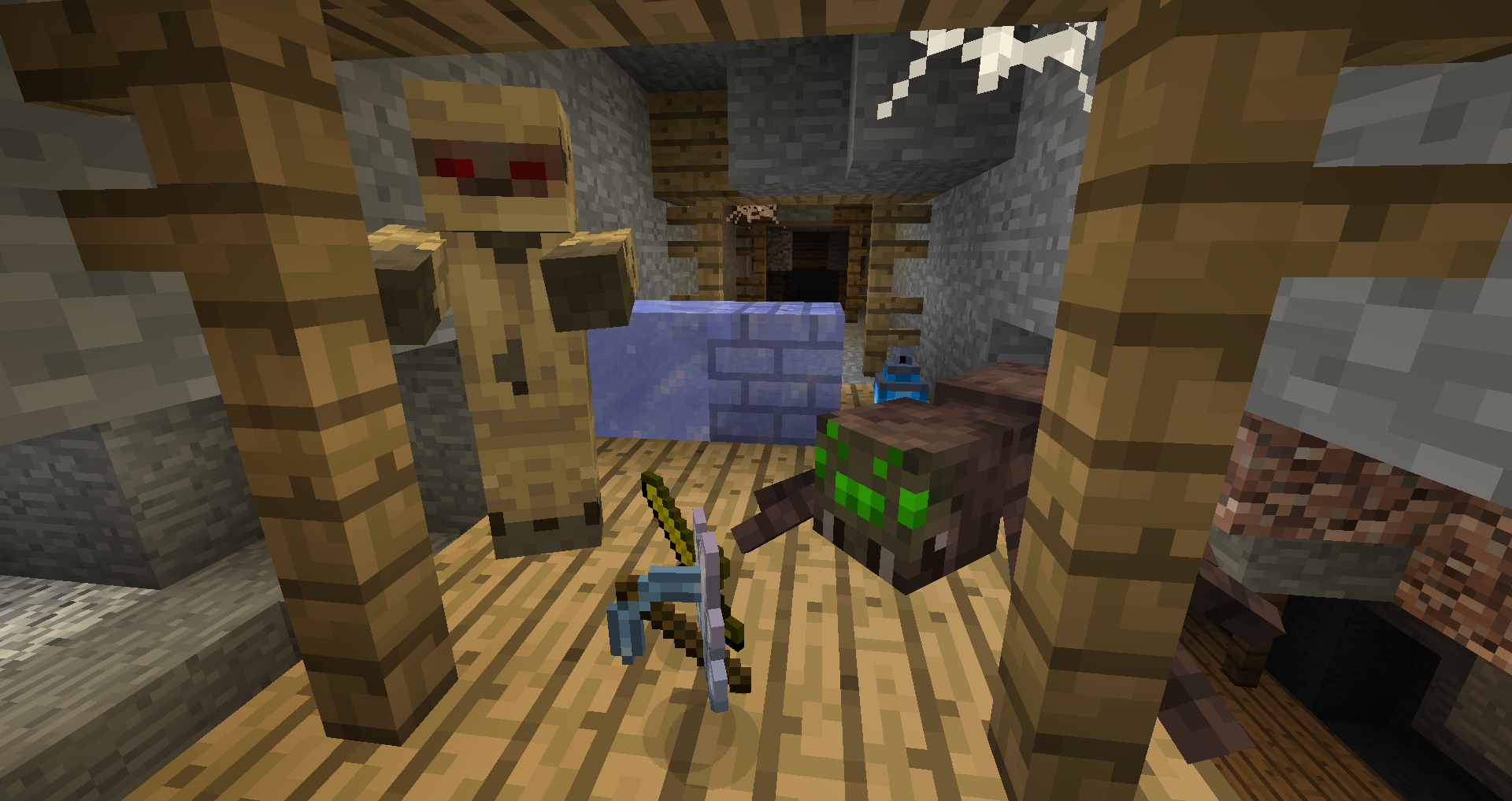 Are you waiting for the Cave update? Well, this mod won't be the cave update but will make mining a bit less boring. I will try to not add just some "new ores" (there are already many mods for that, including RaolCraft Omega) but some features that make caves more exciting without being useless or overshadowing vanilla minecraft.

A little decorative lantern that is similar to Village and Pillage's lantern.

A decorative lamp that can be lit or unlit using Redstone.

A crystal that generates in caves under jungles. It is sustained by a plant that grows in the ceiling of caves. It makes plants grow around it by placing tall grass and crops and turning dirt into grass, deadbushes into ferns, etc. If you try to mine it, it will give you 5 Glowing Crystals rather than itself, even with Silk Touch.

Can be found in some dungeons.

Can be found in some dungeons. Has little durability, but if it is enough damaged and you have a Glowing Crystal in your inventory, it will use that Glowing Crystal to repair itself.

A miner villager that got lost in a cave. Bring it to the surface and he will turn into a normal villager and reward you with some ores!

An hostile spider that spawns in some dungeons. Its poison makes you slow and tired.

An hostile monster that spawns in dungeons in deserts.

A skeleton that only spawns in caves, just for variety. 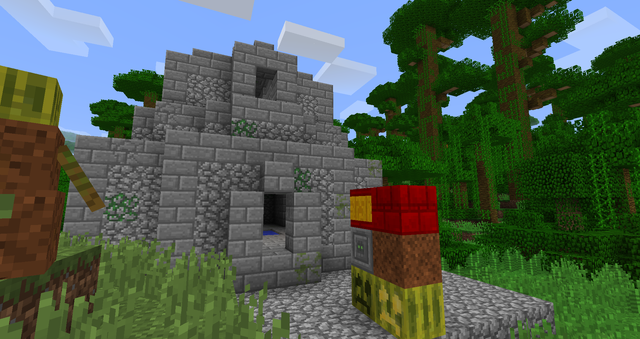 This mod improves the jungle by adding new things to do there.

I know the jungle is actually already filled with features, but I wanted to release the Jungle module as the first biome-based module XD.

Including temples and wells

Special decorative bricks which can only be found in a huge stone temple in the jungle. Just to show you've been there.

You can find them in some red temples or wells in the jungle... or you can craft them.

Shear a Melon to carve it and to get 4 Melon Seeds. You can also craft it with a torch to get a Melon Lantern.

A block that generates in jungles and swamps (even if this module is a jungle module). It acts similarly to cobweb, except it is affected by gravity and is more powerful.

Can be built with 2 Quicksand and a Carved Melon or a Melon Lantern (similarly to a Snow Golem). Attacks zombies and skeletons and their vanilla variants (also attacks revenants). Has very little life, does very little damage and also is a bit silly. Can still be very useful if protected in walls and uses as house/village defender (unlike snowgolems, it doesn't melt and actually deals damage).

An undead which can commonly be found in jungles. Wields a Jungle Saber. Can drops its weapon (rarely), rotten flesh, bones or leather (rarely)

A new weapon whose little damage is compensated by its high attack speed. Can also be used to cut leaves and plants. Can only be found by killing Revenants.

Added Prismarine Ore, which can be found in rare but large deposits under oceans

Added Revenants, undeads which can be found in jungles and use Jungle Sabers

Added Jungle Saber, a fast weapon which can also cut leaves and plants

Lost Miners and Skeleton Miners spawned in every biome

Fixed a few other bugs

Fixed a bug (Enderpearl ore was not generating)

Now the Dephts Spider is an Arthropod

Fixed a bug (blocks in inventory had missing textures)

Added sounds to the Enderturtle

Yes, I know that this mod is even littler than RaolCraft 1 XD, but I just wanted to add some optional features to make RaolCraft easier

I'm sorry, I'm not a native English speaker. :(
Could you explain me the difference?

What do you find hard/boring in RaolCraft?
At the moment the only boring thing I found was going to the End, because the End isn't endgame with RaolCraft but you still need to kill all these rare Endermen to craft Ender Eyes.
So I think that now I am going to update RaolCraft Omega.
If, after an update, I think there is a vanilla resource that isn't enough, I will add a mod to make it easier to find, just like I did with Enderpearls.

I think today I will release 2 modules: Easy Ores and Nether

The nether mod was done, but I had a few issues with Mcreator and I needed to export/import the mod and I lost a lot of time. I will release it tomorrow (And maybe I will also add a new monster

Can you make the turtle have some default armor points?