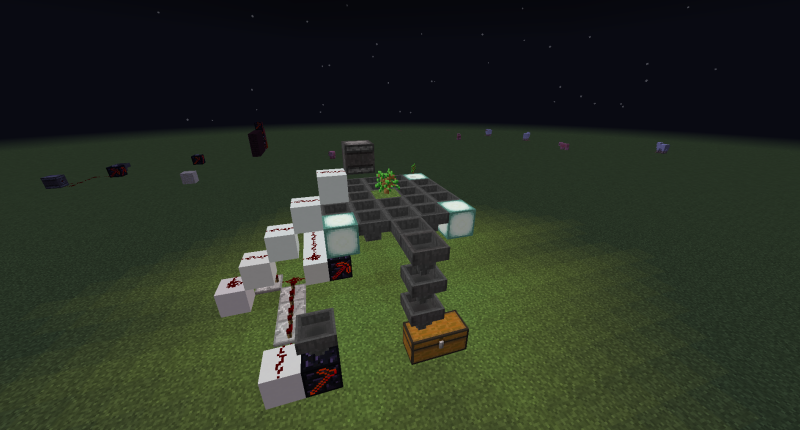 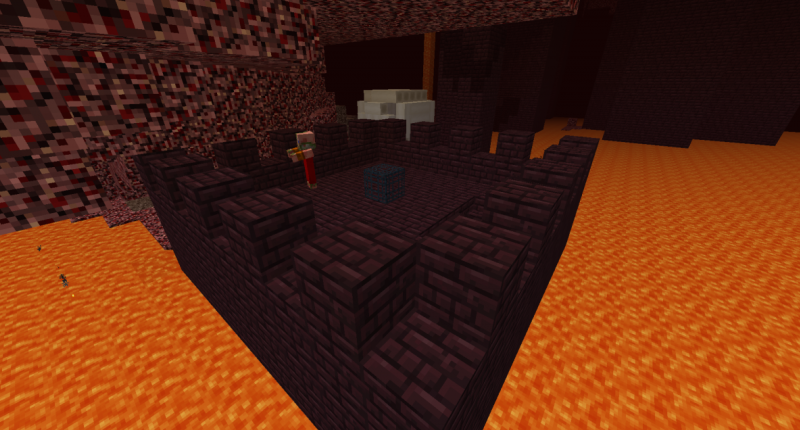 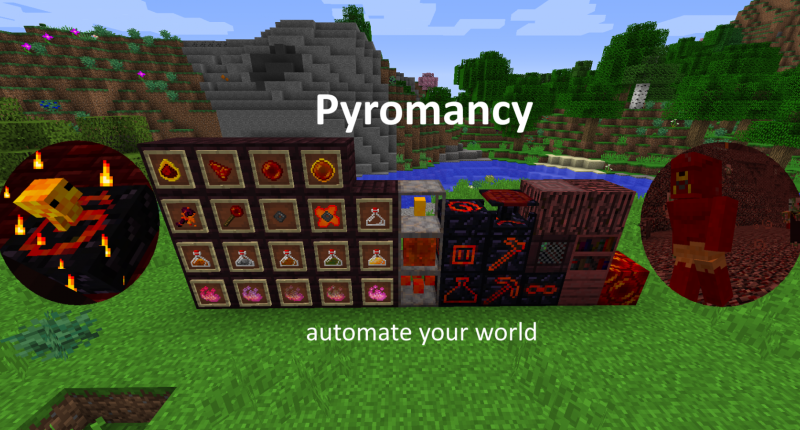 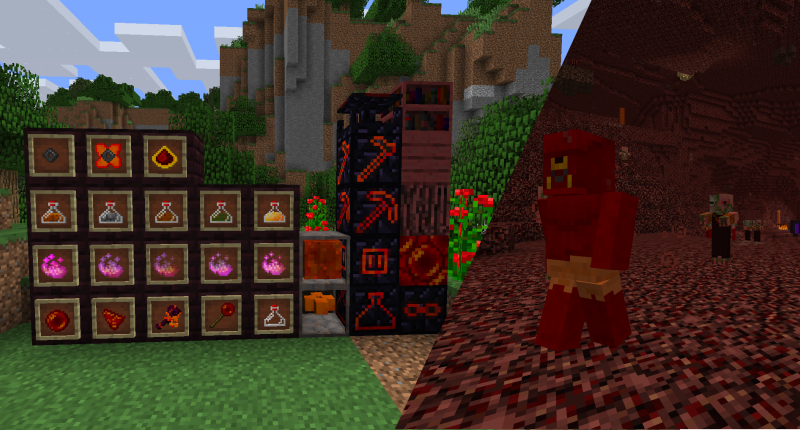 Inspired by Botania, Pyromancy is a magic mod based around fire, the Nether and Red Mana.

In Pyromancy, you can explore new structures, fight new monsters and combine the power of Redstone and Red Mana to rule the world!

There are many new blocks that can help you automating your world. You can find blocks that place plants, trap mobs, destroy other blocks and much more! It's up to your creativity how to use them! :)

While this is mainly an automation mod, it also adds a bit of adventure by improving the Nether with some structures, plants and trees and adding new monsters, a new miniboss, a lot of new potions and a new weapon!

At the moment this mod is very little, but new updates will be released soon.

What does Pyromancy mean?

It comes from Greek and means "fire divination", but in this context it is "fire magic".

Is this a clone of Botania?

No, it isn't. While it is mainly inspired by that mod, I tried to be as original as possible. I actually have never completed Botania in survival so I only know its basics. They are two different mods and you can play both of them at the same time.

Where can I see the recipes?

To see the recipes, use JEI or any other mod that makes you able to see modded recipes.

Where can I find more info about this mod?

If you want more info, go to the official Pyromancy topic. In that topic there is a guide and every block and item is documented.

Does it support Ore Dictionary?

Yes, it does! You are free to make an addon, a cross over feature, etc. for this mod if you want! There are too many ore dictionary entries to be written here, so you'll have to see them ingame using a mod like this.

Does it require any other mods to work?

Could it cause crash with other mods?

It shouldn't. I tested it with many mods and it didn't. If you spot a bug or crash, you can report it here or in the official topic.

Can I include it in my modpack?

Can I repost it?

Can I use a Cave Root from RaolCraft Omega to craft the Pyromancer's Wand?

Why is this FAQ so unusually long?

I am open to suggestions :D

PS: that grey thing on the Nether Cyclops' face is a ring, not a smile! XD 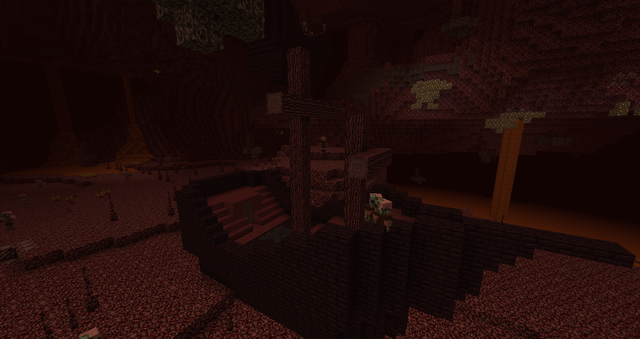 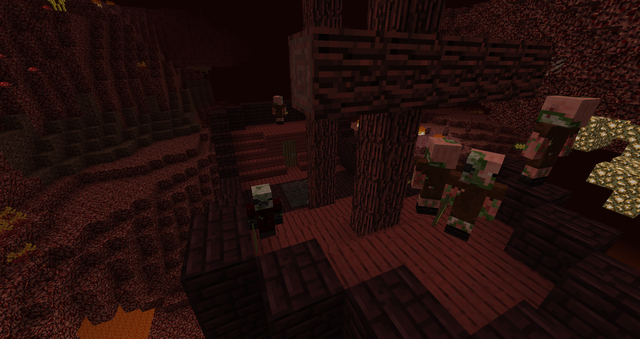 You can find Wizard Pigmen here.

A neutral mob that drops Rotten Flesh and Fragment of Nether Pearl.

Generates Red Mana if it is surrounded by lava. It can sometimes turn that lava into Cobblestone.

Vials are like potions but stack up to 16 and have different effects.

Tells you the amount of Red Mana in a Pyromancy Block.

If an entity is colliding it, it will consume one Red Mana, slow down that entity and make it do a little jump (so it won't consume 1 Red Mana per tick and istantly destroy your Red Mana sources)

+Vial of the Centaur

Makes you fast, able to jump high and strong for a bit. It also causes nausea though.

~Now the Fiery Brewery consumes 10 Red Mana rather than 1

Makes you hasty, resistant and blind for a bit.

Used to plant saplings on grass/dirt similarly to the Destroyer Block (using Ender Pearls and Nether Pearls). Due to a bug that will be fixed in MCreator 1.8.3, all the saplings will be turned into oak saplings, but I don't think this is a major issue.

Currently useless and unobtainable. Nether Trees will spawn in Pyromancy 1.4+.

A miniboss that drops its ring. Can sometimes summon Evil Pigmen Wizards, heal himself a bit or gain some potion effects.

A minion of the Nether Cyclop. It behaves very similarly to the Pigman Wizard except it's always aggressive and drops nothing

A Nether Altar can turn it into a Fiery Shuriken

A ranged weapon that consumes nothing, just its durability. When it is fully damaged it turns into a Nether Cyclop's Ring again

They spawn on little flying soul sand islands, because I couldn't make them spawn on the ground

Currently it's just an alternative to a vanilla bookshelf

Makes you levitate a bit while recovering some health

For creative mode only.

~Now the Farmer Block can place more plants (all the kinds of saplings, all kinds of crops, sugar canes, nether wart and deadbushes). Obviously every type of plant has different conditions that have to be respected before being planted (the block won't waste your red mana)

~Now there no longer are GUIs in the mod

! When using the Fiery Shuriken in creative, it left a huge amount of Rings of the Cyclop

! When the Fiery Shuriken is consumed, it gives 3 Rings of the Cyclop

A new obelisk... Finally! It burns nearby leaves to generate Red Mana. It is the best obelisk right now.

+Altar of the Fiery Imp

Consumes Red Mana to summon and heal a mischievous Fiery Imp that cannot move and attacks mobs from the distance just to attract them near to the altar. It can be good for mob grinders.

It is a solid block until someone tries to walk on it without sneaking. If one does, it will open, making the mob or the player fall there.

It also is the first block with connected textures in the mod.

+Some placeholders for future features

~Now the Immobilizer no longer makes mobs jump. It instead checks if the mob is already slown down before working (and the duration of the slowness is heavily increased): this means it will consume much less Red Mana than earlier

~Now the Immobilizer can be disabled with redstone

~Improved the Nether Cyclops boss fight: now the Cyclops has armor and is immune from arrow attacks but has littler resistance effect. The evil pigmen also despawn very quickly now.

+Added ore dictionary support to everything

A poisonous plant found in the Nether

A deadbush found on Soul Sand in the Nether

(yes, it literally happened this way)

~Made the Nether Cyclops battle a little bit more earlygame: now the Evil Pigmancers only have 10 life and the Cyclops no longer destroys blocks. He now spawns on player location rather than altar location though.

~Done a few other tweaks

!Fixed a few other bugs

After a long time, here's yet another untraditional update, this time adding PIGrates (sorry), a new mob and a few utilities... But don't worry, many new obelisks and red mana blocks are also coming soon! :D

Do you like pirates? Well, I do not, so here's a good reason to kick out those pigs from the Nether! >:D

A flying (or buried, if it had an accident) ship found in the Nether which contains a few Zombie Pigrates as well as some loot (including a precious Wither Skull!)

I didn't come up with a stupid enough pun for this...

An aggressive mob found in the Nether which drops a few Shadow Scales on death.

If you right-click (or whatever keybind you use) with some Red Mana in hand while it is on a Pyromancy block it will directly feed it with Red Mana. Can only be properly harvested if destroyed while holding a Pyromancer's Wand in hand

! Probably fixed some bugs too but I can't remember XD

~ Improved some names and translations

! Fixed some important bugs involving recipes (you could craft Nether Pearls with air for example)

I have just realized this mod has always been in alpha even if it actually is stable, so this update will be the first "beta" one XD

Attracts items from the distance. Only has one slot which can only hold one item (and not a whole stack).

The first turns 500 FE into 1 Red Mana, the second does the opposite (the numbers will probably be changed).

Can be obtained by stripping Nether Log/Wood with any vanilla axe. If you wish to add compatibility with your mod, just set your axe's tag as "axes" (in the "minecraft" group)

A little structure found in the Nether

What? Elves? What are they doing here in the Nether?!

~Rebuilt the structures: they do now support loot tables

~Moved all spawns eggs to the Pyromancy tab

~The Pyromancer's Wand does now display the amount of Red Mana contained in any block tagged as "forge:pyromancybaseblock"

~Now each recipe has its own group

~Fire Tongues and Hellshrubs spawn is temporarily disabled since they got very buggy in 1.14.4

! Structures do no longer spawn under lava or on bedrock

Now plants can be inserted using hoppers (right clicking will no longer work). It is also able to plant more things, like tall grass, ferns, flowers, cacti and more. It also got better conditions for placing plants based on tags.

10/10
And can you add Nether Tools and Blaze Rod Tools and Ghast Tears ools?

Well, actually this mod is about magic, not tools and the only tools that this mod will add will only be craftable after doing some red mana stuff.
I might add these tools in a separate Modular Expansion mod.
Anyways, thanks! :D

Thank you! :D
Do you have any suggestions?

I thought I lost the files of this mod because the Mcreator version I used to make it (1.8.0) was not loading and I made no backup workspace...
Then I went to MCreatorfolder\user\workspace and discovered that there are all the workspaces there! I imported one of these workspaces and that was the Pyromancy workspace!
That means new update coming soon! :D

Another update is coming soon :)

I hope we will be seeing updates to this mod as I see a big mod growth potential :D