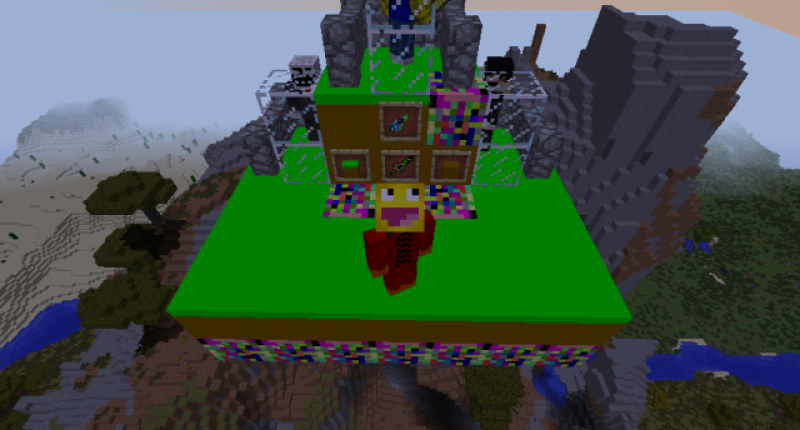 Note:Before downloading I HIGHLY recommend gtting optifine,Fastcraft or anything that optimises minecraft as I found a few hundred lag mobs in testing.(Does not include Lag mobs yet)

Another Note:This is my second mod![Insertepicsmileyfacehere]

Even more notes:Now back to the mod

One day there was a ModderHD that was messing around in Mcreator.

I then desided to put the stuff together and the Interweb mod was born!

This is me mocking stuff on the internet from Jpeg,png and Gifs to Memes and even Glitches!

Jpeg,pngs and Gifs are found in grass as well as the "Clone Virus" which gives you Internet Cookeez(Dont give hunger but is food for dogs),

the "diamond Virus"Which eats your diamonds and the BetterthanadiamondpickPickaxe which I wont tell what it does.

You can also find an Anti-Virus which destroys "Clone Viruses" and "Diamond Viruses"(and eats your cookeez ;-;).

Then there are randomly placed "Glitch Blocks" that give you 1 glitch shard when broken.

Glitch shards can be used to create the block again(4 in a square) or Glitch Sticks(one on top of the other).

Glitch sticks are used with the shards to make a Glitch sword which does +24 attack damage(Total of 25!)

Though do watch out because in the biome you find Epic Smiley Memes,Troll Memes(Boss) and Hackers(Boss).

Smileys and Troll Memes have a neat but rare drop. Good luck getting it!

The rest is for you to find out.

If you have an idea that is Internet based dont be shy and tell me it!It could be featured in the next Update!

Most everything listed here is found in the mod review for it.

thinking of adding coins in the next pdate(1.1)

I rezolved the forge bug, i will play the mod now!

no problem if you have a suggestion tell it o me :)

I was going to update this to 1.8 after I finish my netheruby mod but,this is going to be a priority now.

What do you think if I where o add Illuminati(Item) and Herobrine(Boss)?
Or just one?
The Illuminati(item)would be crafted by finding two Illuminati Pieces,a Illuminati Top and an Illuminati Eye in dungeons.
The use is still being though on.
Hereobrine(Boss) would drop a diamond block or rarely the Illuminati(If added or a Nether star)

I wrote "o" but meant "to".
Anyways tell me your opinions.
I'm all ears!

Illuminati and Herobrine?Confirmed.Definately adding them.
Oh and glitch sticks and the sword will be crafted with the block instead of the shard.
Shard is for something else.

+Added mod review to the page