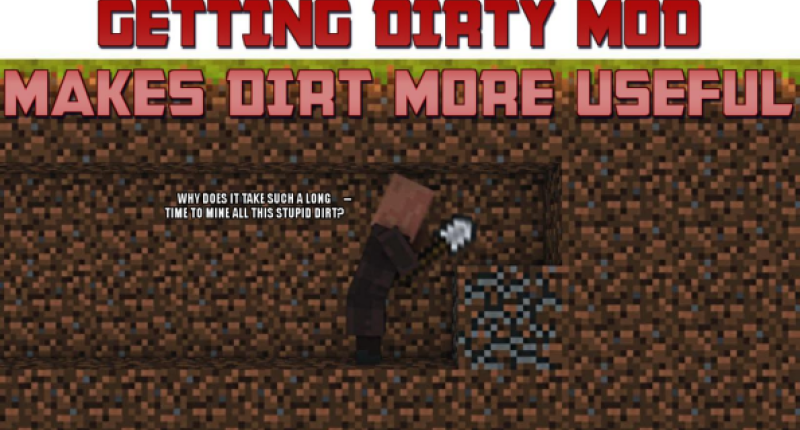 Updated mod description to fit the current state of the mod better.

MOD SHOWCASE VIDEO AT THE BOTTOM OF THE PAGE

Some small changes and fixes here and there but it should be mostly the same.
The only noticable changes are the Dirt Mob's drops.
It now drops "Living Dirt Chunks", as I decided to call the mob "Living Dirt", and rarely a "Broken Dirt Heart".
These works just like the previous drops but has real textures instead of a modified dirt block texture.

Living Dirt now has a 5% chance of spawning when breaking a modded dirt block.

This mod now works on servers !
But Living Dirt is invisible... (only on servers)

A decent mod review would be very much appreciated !
Send your mod review to me and I may feature it here if it's good enough !

All info needed for a mod review:

You can make armor from Compressed Dirt.

You aquire Red irt by crafting a Dirt Staff and right-clicking anywhere while holding it.
Red Diamond Sticks

The "Living Dirt Mob" spawns more often in it's home biome: The Dirt Only Land.
Which is easy to spot as it's only dirt on top.
Living Dirt drops:
Living Dirt Chunk - 100%
Broken Dirt Heart - 20%
The Dirt Heart is used to light the dirt portal.
Make a portal with 10 Hardly Compressed Dirt and light it with the Dirt Heart to enter the Dirt Dimension.

The block made of 4 Red Dirt and a Red Diamond is to be placed and destroyed with a pickaxe to gain 24 Compressed Dirt. [Client Edition Only]
You can use 1 Red Diamond and 4 Red Dirt to craft 24 Compressed Dirt [Server Edition Only]
There is also some side crafting recipes to make life easier:
You can make dirt from gravel.
You can make cobblestone from all those different stone blocks that have no use.
And you can make dirt from Coarse Dirt.

This mod is now out on CurseForge!

Mod review made by KingAndSlayer
Watch the Mod Review

I would love to get suggestions that has to do with dirt !

What's planed to be added:

UPDATE 5: 1.0.3! A dirt dimension!!! And a dirt biome!!! Build as a nether portal made of Hardly Compressed Dirt! Use the Dirt Lighter (at the bottom of "Crafting")!

UPDATE 6: 1.0.4! Changed the generated blocks in the "Dirt Dimension" and made it nether like!

UPDATE 7: 1.0.5! Fixed some bugs with the tools, some crafting and some blocks.

UPDATE 8: 1.0.6! Fixed all shovel tools from being indestructable and for being unable to break gravel and sand.

UPDATE 9: 1.0.7! All mod items will be found in one creative tab named "Getting Dirty Mod!"

UPDATE 10: 1.0.8! Red Diamond (Ore) & Dirt Staff! Dirt Staff is crafted like a shovel with "Dirt" as "Sticks" and "Red Diamond" on top! Right click with the staff on a block and then one more time with your hand, place the block you got and then destroy it with any pickaxe or your hand!

UPDATE 11: 1.0.9! The Feeling of Success has been added! It's a record! Crafted by putting "Dirt" in the middle of a Crafting Table and surrounding it with 4 "Red Diamonds"!

Living Dirt is invisible on servers.

Finally you got mod of the week! :D Im so happy for you!!!

@#3 Hopefully not! You know, some people do

@#4 I followed the instructions in the MCreator application...

@#5 Cheburashka?! What's that supposed to mean?