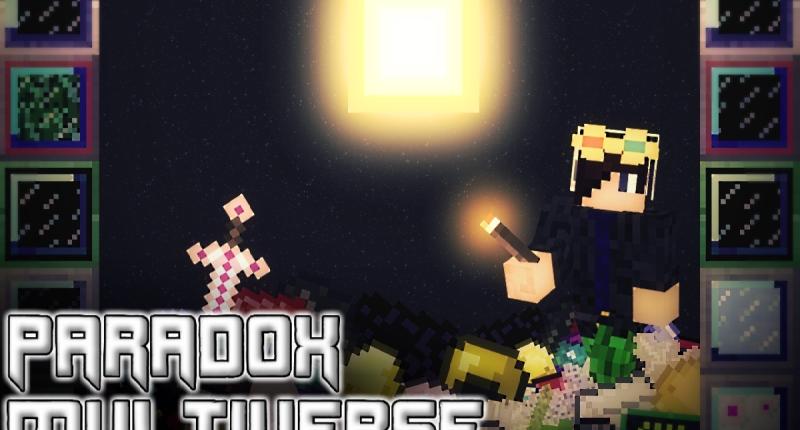 Has minecraft become too boring? Too less ores? Not enough exploration or dimensions? Lack of advanced crafting recipes? Too few enemies?

(This mod is undergoing a rewrite, so downloadable content is not 100% complete!)

The processors can be upgraded to unlock further dimensions, from basic to upgraded, from ultimate to quantum!

There are also many ores such as the light pearl, firestone, gem of hatred, icemium, copper, tin, uranium, osmium and so on! You can utilize these materials for many uses, such as creating tools and armor as well as machinery!

For more details, look into the tabs below: This dimension makes the nether seems easy as it spawns all hostile mobs from vanilla and custom mobs that are basically nightmares if you are on hardcore! You may find abandoned buildings and ruins of civilization.

There is soulless sand, hellstone and hell sand everywhere as well as magma and dense magma. The world far above the overworld. It has islands, floating villages and castle structures

There are angels and hostile mobs do not spawn. This is a land of peace. An alternate overworld where the ice age never ended. All stone is frozen-through. Icestone and icemium spawn in this dimension. All water is ice. You may find igloos.

Penguins spawn here as well as polar bears and other mobs of that time. Beware of the mean snowmen! Ah, the beautiful flora realm! Trees, flowers and beautiful biomes spawn here! There are special biomes which are quite rare and alot of trees. If you love trees, this dimension is for you!

It is an attractive place to settle down in! Absolutely nothing! A basic dimension made with empty dimensional rift containers!

If you want to play skyblock or build in all directions freely, then this dimension is perfect for you!

6. Sands Of The Universe [Work In Progress]:-

All types of sand as well as special sands spawn in this dimension!

A decaying reality with strange matter. A parallel universe on the brink of end itself. The world has alot of caverns, no trees, no passive mobs, lots of hostile mobs and danger!

Bill Cipher is from here. The Nightmare Realm also known as the darkness dimension is a pitch-black nightmarish dimension full of hostile demons, lost villagers and more hostile demons!

9. The Paradox Multiverse [Work In Progress]:-

The ultimate multiverse where EVERYTHING spawns and all biomes as well as structures appear. It is the place where all biomes intersect. It is an epic place! Strange matter is a thereotical matter from real life science. Basically, this block will consume and convert anything around it into itself. It is a rare item which has a capability to destroy the world, so beware!

It can only be removed used the Strange Matter Remover (SMR). There are over 100+ recipes and imgur couldnt take them up, lol.

There are no viruses or ads, it is my official mediafire.

The download is on the bottom of the webpage!

If you make a mod review for this mod, write it in the comments below and I will pin it!

-Fixed texture for a couple of blocks

-Sorry for the errors dudes =P

-Renamed tin ore from tINoRe to Tin Ore (how did I even make that mistake if I graduated english perfectly?)

-Now you can craft the nether star!

-Added the upgraded, ultimate and quantum dimensional rifts and processors

-Added lots and lots of items!

-After the fifth corruption/lost of files, I have returned to this mod!

-Textured all sands for sands of the multiverse

-Reorganized plans and the page

- Most rifts are available and openable

- Sky dimension rift is fine CORRUPT. DONT create it or RIP world. I am not responsible btw....

-Redoing the mod. I hope i succeed at something at this point.

-STABILITY ACHIEVED, NOW YOU CAN ALL PLAY THE MOD =D

-Added blocks for all materials

-Added 10 new blocks for lower nether dimension!!! It is complete!!!!

-The 2 other dimensions are heavily WIP

-Mod changed from ores and materials to technology and science fiction

-WARNING: THE CURRENT MOD IS EXTREMELY UNSTABLE AND I CANT FIND THE FIX FOR SOME BUGS YET!!!

-Added obsidian ingot, nugget and a couple of other small things

-It is now stable!!! I added blocks and a whole new set of items

- It is back with a much better quality and idea. The rift mod idea has been merged back into this mod for a much better experience =)

-Mcreator stopped working. I am sick of it so I abandoned this mod.

MOD OF THE WEEK

While I was gone, somehow my mod was noticed and became the mod of the week. All I can say is thank you, thank you and hurray!!!! =D.

I am actually legit suprised 0.0.

I will be rewriting the mod in the next couple of days.

-added a couple of new gems

-recompilation due to glitches and conflicts

-added pebbles(can be dropped from grass or crafted)

-removed transparent sand for being invisible

-fixed crash due to paradoxium

-renamed mod to" paradox ores and dimensions" from "paraxoid items"

-fixed a crash glitch and renamed some items

added amethyst and a couple of ores

-noone but me now wants to develop it. So I will develop it my own self

-added and removed tardis due to glitches,crashes and model problems =(

-plans to add this mod to a russian/ukrainian server locb.su

-happy birthday to me

-change of schools so we wont see our mods and bros

-removed super armor for being waaaay yo op

-removed toilet for being absolutely useless

-removed computer block for being useless

-created old version of this page My Other mod called The Rift Mod+ had merged into this mod:-

We were mentioned in the 2016 recap of mcreator!!!

We are considered as one of the biggest mods made with mcreator in 2017:- O.O

My Channel for updates on the mod and all else:-

Please do not upload my mod without permission. Do not claim it as your own mod, okay? =)

The mod was created with mcreator which is developed by pylo and inspired by countless other mods.

I give permission to make mod reviews of this mod, just DO NOT forget to credit me and ofcourse, Pylo developers =P!!!

If you want to use this mod in a modpack, write it in the comments, so I can see which modpack it is =)

And lastly: I am not responsible for damage to your minecraft world by using this mod.

Anyways, thank you all for the overwhelming support for this mod! I love y'all! Thank you!

Ok guys, tell me your ideas!!!

@#1 Hey got a cool idea. Sorry I can't test your mod right now, minecraft continues crashing... Ok always could you make a Dark Stone dimension? The Dark stone can be mined with iron or more. The portal is made of dark stone (from Overworld) crafted from 1 stone and 2 ink sacs (or whatever you want). The grass will be gray and the sky black. And make a dark guard mob that is neutral and a dark biter that spawns in dark dungeons and have 100HP and is slow. It is a boss. The dark stone armor gives you protection like a diamond but durability like leather. Make also a dark stone set of swords, pickaxes, axes, shovels, and hoes. They have the durability of stone but are efficient as iron. And the sword haves a 5% to effect the mob hitten with poison, and 1% wither. Make a dark stone bow that shoots 2 arrows at once. Create dark wood trees and dark dirt and grass. Then create structures like dark wood villages. Then make an ore that gives you 64 dark stone and have a 5% chance to kill you. And make dark villagers that are SAAAD and don't trade and also are neutral and give A LOT of damage. Then make a dark water and a dark lava and dark gems. And dark ingots and make ores for all of them. Then... oh wait i forgot the RAM limits xDDD

@#1.1 ok... my next ideas are to make a new command that crashes minecraft. XD i'm just crazy when commenting this. crazyness. #lolthisisrandomandhavesnosense

@#1.1 That is an awesome idea, but in terms of size, you'll have to wait a while until I implement it XD

@#1.1 I will add them in the sands of non existance dimension!!!

can you also add quick sand? its just an idea like make a new dimension called what ever you want but like it had all these different mobs like the sand goblin that comes out of the ground with a mallet but they come in packs of them and the sandar which is like a snake but a huge sand snake hopefully you get this because i think it would be cool to feature in my mod showcase!!

@#1 How about a world taken over by creepers?

You have a really nice mod page (description). Congratulations!

One of the best MCreator mods.