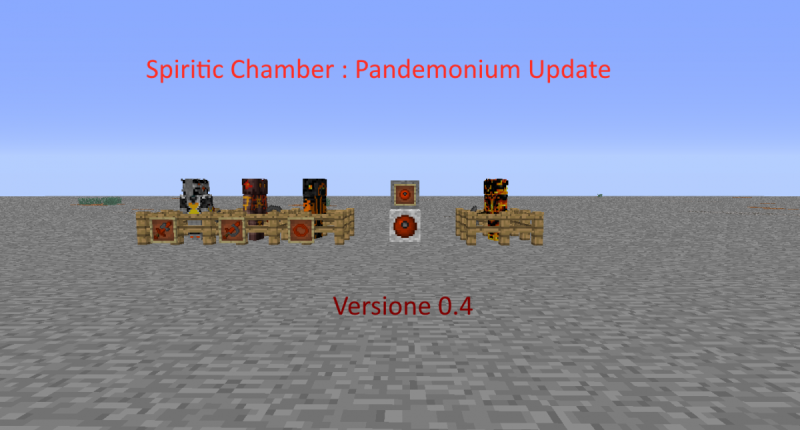 IMPORTANT 1 : This mod will end at the 0.4 version because...no more ideas...so,in some days,will come out a mod that will continue more than this!

IMPORTANT 2 : READ ALL THE DESCRIPTION! IT IS USEFUL FOR ALL THE CRAFTING AND NEW FEATURES!

IMPORTANT 3 : I SUGGEST USING NEY/JEY...BECAUSE I DON'T KNOW HOW TO PUT IMAGE IN THE DESCRIPTION

Hello everybody! It's me! SpaceMiners_444! and i'm here with my 4th mod! the Spiritic Chamber Mod!

A mod filled with magic and strange thing that will keep you glued to the screen for many hours!

Here's the 4th update! Sorry for the slow uploading of new update! This is a present for you! =D

+ all the tab for the creative

+soul of a samurai (mob)

Version 0.2 : The Nature and Mob Update

+Retreated Sword of the Nature

+Sword of the nature

+Sword of the Pumpkin

Version 0.3 (part 2/final part of the 2nd update) : The Nature and Mob Update

+a new tab for wand and staff

+forest of the insect wood,planks,stick and leaves

+forest of the insect (biome)

+longstem shroom (plant and food) (the same as the blackbell shroom)

+Pandemonium Warlord (the final boss of the mob)

+Sword of the morning

+9 New Boss! too many to write them

-Infliction sword : if right-clicked , it will deal some damage, but will also give you some blood

-farmer : if right-clicked with a golden ingot in the hand, it will trade it for a golden egg

1. if right-clicked with the banterite berry, it will give you the crushed banterite

2. if right-clicked with the sur worm, it will give you the cooked sur worm

4. if right-clicked with the fermented tarantula eye, it will give you the tarantula potion

-Infested sur wood : if the block is right-clicked, has a small chance (10%) of giving you a sur worm

-goddess : if right-clicked with a golden egg , it will give you the golden tear

-sword of the nature : the retreated version can be crafted into the sword and vice versa

-toxic sword and toxic block: if right-clicked with the sword on the ground,a toxic block will be placed. this toxic block , after some tick , will spawn a toxic spider and then disappear

-Enchanted furnace : As a similar use to the enchanted cauldron...in fact:

-blackbell and longstem shroom : if they get eated not-cooked , they will give you bad effect. but if eated cooked , they don't give effects! =D

-zombie staff : if right-clicked in air , it will summon 2 "summoned zombie" , that attack some of the mob

-wand of defense : if right-clicked in air , it will give you resistance II for 10 sec

-Portal to Pandemonium : if right-clicked , it opens the pandemonium wave GUI

-Molten ring : if right-clicked , it will give you fire resistance

-New mob and boss (maybe from a TV series)

if you have suggestion, please write them in the comment! And tell me if someone is available to do a mod review...thanks for everyone who download my mod and for all the future suggestion!

@#2
Hello there, RaolTheBest. I didn't even think that someone could write me to "return modding", and i am really happy about this, thanks alot :) Btw, i am restarting to create mods and i will hopefully create bigger-than-ever mods.