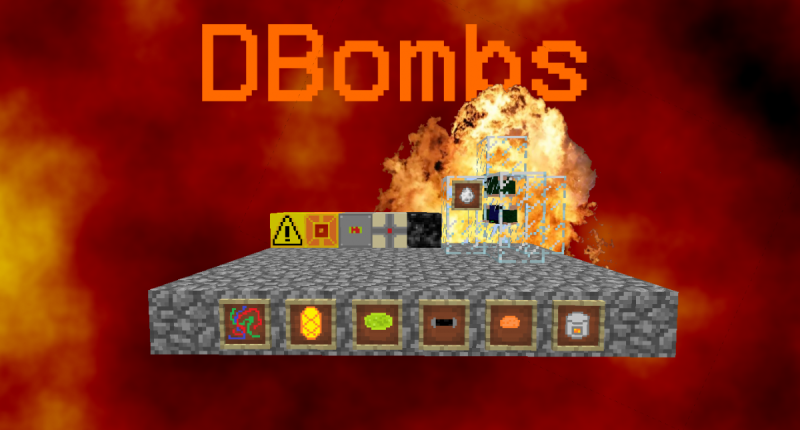 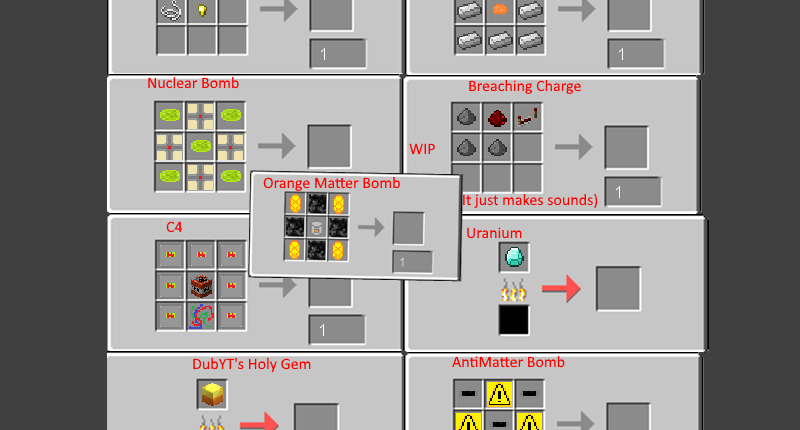 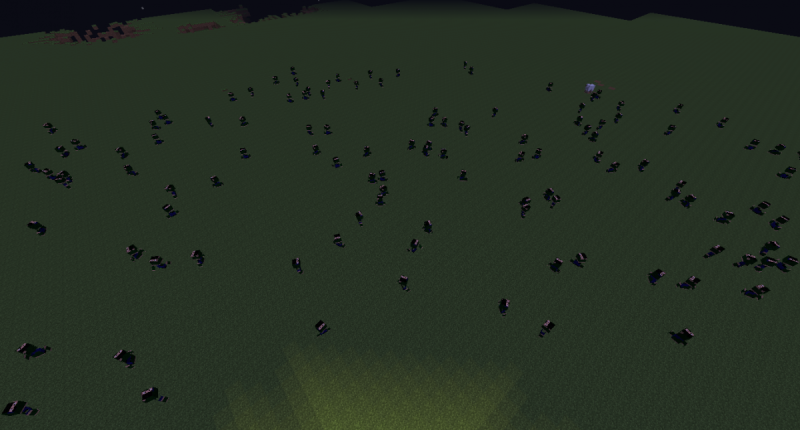 A bug of this mod: ALL OF THOSE ARE EVIL DUBYTs!!!!

(None Craftble things can be found in dungon chests) Welcome everyone to DBombs! Dbombs is a bomb pack that was made to destroy or troll your friends how ever you want! From C4 to Nukes, this mod packs a punch! (Note that every bombs needs to be activated with readstone, if you use a redstone torch, you need to have atleast 1 redstone dust.). This is my first uploaded mod so it might not be as good as other mods, but this mod adds 5 explosives which can be crafted in survival (above). The first bomb is the "Breaching charge, the thing is, it's still WIP so for now,(EDIT: It is great for traps with a tripwire hook since it damages the mob/player alot.) it doesn't destroy any blocks. The second bomb is C4, the classics. It is about 2x more powerful than TNT (TNT = 4F, C4 = 10F). The third bomb is Nuclear Bomb! It has a large explosion radius of 20F. It is not THAT expensive because 5 Uranium (Uranium is made by smelting diamonds) but when you talk about the C4, it's gonna take a while to craft all of that C4. The fourth bomb is the Antimatter bomb! It has a power of 30F which kills ALOT of mobs, including yourself. Finally, the last bomb is The Orange Matter Bomb! This bomb is all based around me, you have to kill a glitchy/evil version of me. The Evil DubYT mob is WIP but this is what I can tell you about him: He spawns in the plains, he can harm you alot, and that he drops my stolen permission note which is used to craft the Holy, Orange Matter Bomb! It has an outstanding, 50F power! This beast can kill mobs up to 100 blocks away! It causes alot of cracks in the earth that can damage things that are very far away! If you own this bomb on a server, you will become, The Lord of the server. You can destroy an entire village with this. Hope you enjoy this mod and hope the moderators don't delete this mod I worked on for alot.