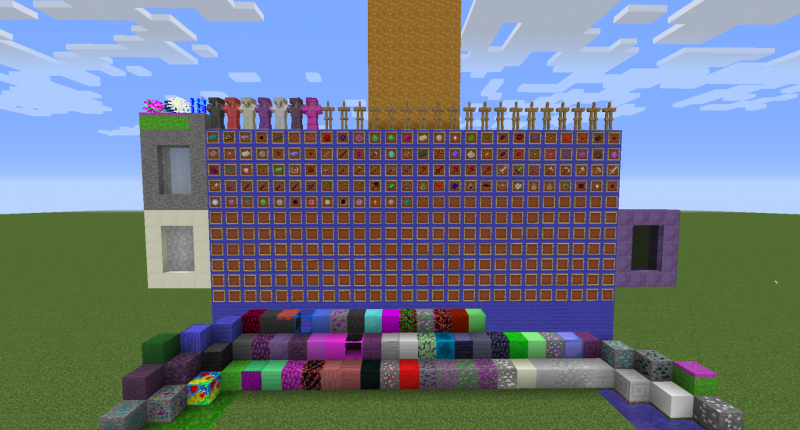 Everything in the mod (updated)

Welcome to the VuclanCraft mod...

After the faillure that was Vuclancraft 2 I'm back with the original mod!

-The stuff from Vuclancraft 2 that wasn't included in 1

The first new update is out and is mostly a revised to the first 2 updates, the undeternable update and the nether update.

That's everything for now, see you at the next update!

special thanks to kingtorsten for playtesting

So this has been kinda dead for the last 7 months, and I kinda screwed everything up. But after the faillure of Vuclancraft 2 i'm back in the original! So here's what I'm going to do. As seen by the title of this update we're back in alpha! The updates will be smaller but more common.

-Added 2 new charms, some new items, and a black hole in a bottle wich will delete you're inventory

-Deleted a lot of stuff from beta 1.4 (not all of it though)

-Probably some other stuff I don't remember

This test was released earlier because it has important changes. Nothing to the infinite caves tho, I will focus on that in the next public test or the release of beta 1.4

Only used as a dye, will have more use in the next public test or beta 1.4

Drops from the undeternable breed

(same date) edit: forgot to say this but playtested by kingtorsten

Happy new year! Now go play the new test! With tons of things working like they should! Seriously!

Starting with a big one!

-added the guardian of the depths

A new boss! Kill him to get acces to a new dimension...

-added the guardian of the depths summoner

-added cavenighter (or whatever it's called)

a unused concept wich was planned for alpha 1.6 (wich originally would be the weapon update)

the ammo for the light gun (if you couldn't tell)

because it's finally possible!

you can make undeternable sand with it

now nether string finally has a use again

expect the name to change

used as a liquid for the infinite caves dimension

also spawns in the overworld

no idea if I spelled it right

spawns in the overworld

spawns in the overworld and nether

also, plank recipe's are shapeless now so yeah parts of this mod are getting polished! Still nowhere near the release of 1.0 tho :|

maybe once... light ghast comes back

-all igniters are now located in the charms/summoning items tab

it was just leftover from beta 1.2 for the light dimension

It was planned to spawn with a unused structure, the light well

-removed all saplings because they crash your game

If they still do that

So that's it! The first part of beta 1.4! Enjoy the last version of the mod with a changelog without the formatting tools and overpowered tools (they're gonna get nerved, a lot :|)

-added a fix because the mod crashes (basically deleted juicer) recipe's for juice will come in beta 1.4, no juicer

This update was made in 2 days and is a way for me to say sorry for being inactive and not updating the mod. It's called the unfinished update because of the juicer, the most broken thing in the mod!

-added hammer, use in a crafting table with a shulker box to get 3 shulker plates instead of 1

-added juicer, only able to craft apple juice, the input slot is broken (imput slot 1) I don't know why so, sorry

-lightstone and blocks made from it are now called licanite

-changed the sky and grass colors from the light dimension

-lowered the enchantabillity for red diamond armor, but increased toughness

-lowered the toughness for light armor to 2.1 (will maybe be nerfed more in the future)

Sup it's me. This is part 1 of beta 1.2, because otherwise the update would take too long.

-added nether tree sapling, dark sapling and undeternable sapling (do not use yet! will probally crash your game like it did by me)

-added 2 new charms: defended charm and the charm of the dark strength

- added a new forest biome for the light dimension...

-added wooden gear with the worst texture ever (placeholder)

-added undeternable desert (still a wasteland with no things like cacti)

-removed all juice recipes (will come back)

readded light charm as a tool

-changed the parent of the light charm advancement

-harvest level for bleen ore has changed to 1 (was 2)

-the tool type of zorox sword is now sword

-increased damage from krono sword to 7

-light and dark portal now have an animation

-undeternable sand and sandstone no longer spawn like ores

Welcome to the food update wich adds stuff to the most lacking thing in this mod: unique food items!

(did I mention that each kind of candy gives a different kind of potion effect?;) )

Special thanks to kingtorsten for playtesting this update

We've hit beta! Thank you all for 20+ downloads

And now I have the best update yet! The Dark update!

This update adds in a brand new dimension and also has balance changes and fixes some bugs! Now lets start with the changelog!

-added dark golem, the newest boss and the easiest boss (because the dark golem boss is mid-game and the other bosses are end-game)

-added advancement, only one for now, with many more to come!

-advancement: a light in the dark (craft the light charm)

-fixed the bug when you drop an item the bosses spawn

special thanks to kingtorsten for testing the update!

-molten gem boss, a spooky new boss with unique drops that are useless for now (please note that everything I add that is useless will get usefull at some point)

-right clicking with a light gem will spawn the light ghast

stay tuned for the next update!

Next update will contain new stuff!

-light gem ore (currently unable to get in survival

-light gem (is obtainable in survival)

-Light Defender, these tough guys will work together to defeat you!

-ender gem and ore, a new way to get ender pearls!

Alpha 1.2 is here! wich doubles the content of the mod with this brand new, nether themed update!

-added zorox ore, the first nether ore of this mod!

-added nether tree, a rare tree only found in the nether

-added nether arrows, required for the nether bow to shoot

Update on the same date as the mod release date

Welcome To An Undeternable Update!

The first update of vuclancraft is here! Expanding the undeterable concept, with brand new things such as:

-Krono sword is now located in the right tab